Wipe out all life in the ocean.

Kill The Luminary and his party.
Raid Nautica (all failed).

Alizarin is a minor antagonist in Dragon Quest XI.

After the fall of the Yggdrasil, Alizarin is given the red orb by Mordegon, which give him ability to weaken foes.

Alizarin  first appeared when the Luminary had to escape from Nautica, which was getting raid by Alizarin and his army of merkings.

He than reappeared when the Luminary, Hendrik, Rab and Sylvando went to the Warrior's Rest Inn by their ship. He appeared and attacked them. Rab tried to repel him by using Pearly Gates, but Alizarin's red aura make the ability ineffective. He than attacks the ship and nearly sinking it, with the Luminary knocked off the ship as the result of his attack.

Alizarin than appeared again when the Luminary and his party are trying to recover Erik's memory and go to Snifihelm, since the usual entrance is blocked by a golden iceberg. He once again attacks them, but the Luminary summons a lightning bolt to destroy Alizarin's aura, thus allowing the party to engage him. This time Alizarin is defeated, but before his death, Alizarin realized that the Luminary is still alive and warns Mordegon about it before exploding in purple mist.

Alizarin is a giant black lizard monster with a blood-red belly and red horn. 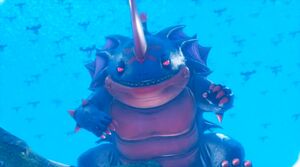 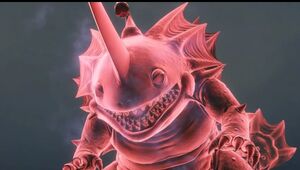 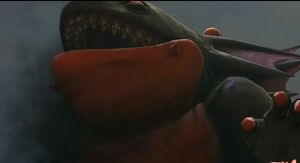 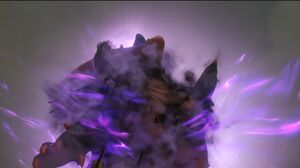