Alkhema is a supervillainess from Marvel Comics. She is the Avengers' foe created by their archenemy - the robot known as Ultron. However, despite sharing similarities with her creator, she differed from him in style and enjoyed her work on a much more "personal" level.

The second of two robots made by Ultron to be his wife, Alkhema was made by Mockingbird, Dr. Henry Oym, and  Myron MacLain against their will. Around this time, Ultron planned to remove all organic life from Earth, and wanted a bride to work with and to have around. Alkhema was more deadly than Ultron's first attempt (Being Jocasta, who later turned against him.), but she was similarly human, which gave her a liking towards bloodshed, making her want to whittle away the human race with one death at a time. And so, she fought against Ultron with the help of the Avengers. After both were sent to space, she helped Ultron yet again to try to destroy humanity, which stopped when she went rouge and went to the Avengers.

In recent times, she has upgraded herself to a new body she dubs Alkhema-2. In a plot against Ultron, she tried to kill the Avengers before he can, but was stopped and inprisoned. Escaping custody later on, she waded through the aftermath of the Avengers and Ultron's brawl in Slorenia, where she found copies of Mr. Pym's, Wasp's, Vision's, Wonder Man's, Scarlet Witch's, and Grim Reaper's mental patterns, using them as bases for her own robotic race that would overthrow humanity.

Later, she made a group of bio-synthetic creaturs known as the Robos with said templates. As with all robots made using some part of Ultron, all of them came with a mental plan to revive Ultron. As the Avengers were investigating them and found Alkhema, Ultron awoke. The three groups fought, but Alkhema made the Avengers kill her to kick-start a en-masse Robo self-destruction. In the blast, only the Avengers, a robot named Antigone, and Ultron's head managed to survive the blast.

A extremely strong and durable robot, Alkhema is made out of adamantium and has numerous weapons build in. Having inherited Mockingbird's combat prowess, tatic for tricking her foes with her speech, and want for children, Alkhema puts a creepy twist on the third quality, having a obssession with mothering other mechanical beings. Her first attempt were called War Toys, which where primitive in design but also powerful minions who respond to her commands. 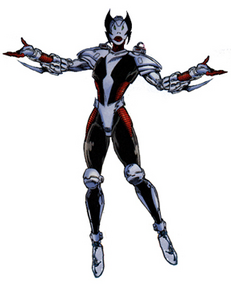