Allegro is a recurring villain from the 2016 reboot of the Cartoon Network original series, The Powerpuff Girls. He is a magical, flying panda bear, who brainwashes people into acting idyllically blissful at all times. He first appeared in "Painbow", and was ultimately defeated in "Largo".

In "Painbow", a rainbow formed in The City of Townville, which managed to have some kind of weird effect on the citizens of Townsville, causing them all to act happy and silly. The Powerpuff Girls investigated the source of the problems, which seemed to be coming from a big, stupid panda bear in the clouds, named "Allegro". Allegro was quick to admit, that he was the one behind everything, and that he was causing everybody to act cheerful and goofy, so that they could have a huge party. He brainwashed Blossom and Bubbles into a state of ignorant bliss, leaving Buttercup as the only normal person in town. Buttercup learned that there's a time and place for having fun, but enjoyment is not intended to be had, all the time. Allegro tried to hug Buttercup, but Buttercup fought back. Every attack Buttercup landed on Allegro, caused him to break into pieces. After finishing him off, Allegro exploded, and imploded, the aura of happiness around him imploded, with him, setting things back to normal.

Allegro's last stand was in "Largo", where a completely different guy named Largo appeared. Largo was basically the anti-Allegro. Instead of Allegro using his rainbows to make everyone happy, Largo used his rain clouds to make everybody sad. Bubbles was concerned by the sudden wave of depression that hit Townsville and she went to the clouds to investigate. There, she met Largo, who introduced himself and told the backstory of how he used to be a happy bear named Cosmic Bear. As Cosmic Bear, he was stuck by lightning from a cosmic storm, separating him into two entities of completely opposite emotions. Allegro embodied all of his positivity, while Largo embodied all his negativity. Allegro and Largo, simply could not get along, as they were way too different to live together. Bubbles set up a tea party with the two of them, in hopes that it would help them get along. 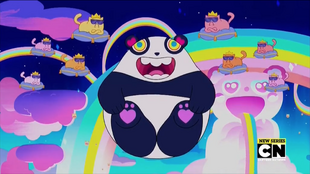 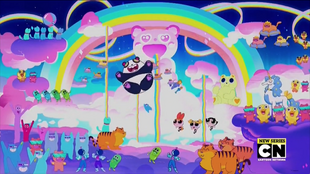 Allegro in his natural environment. 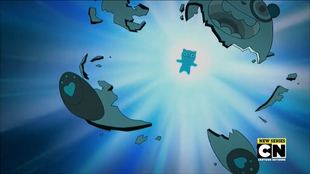 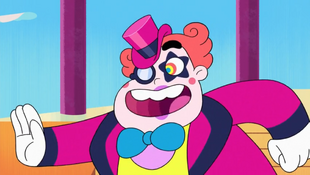 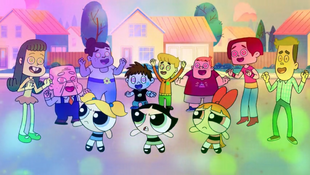 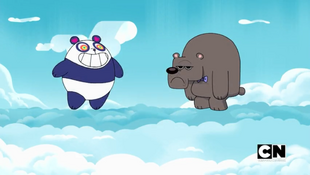 Allegro and Largo after first being separated. 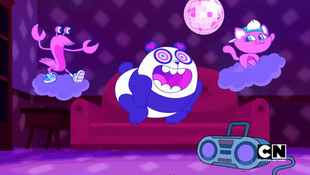 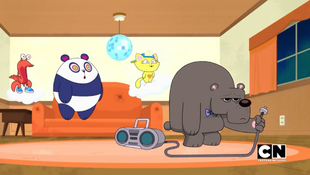 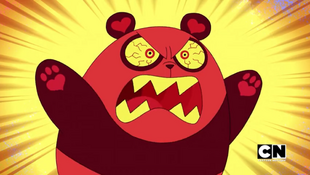 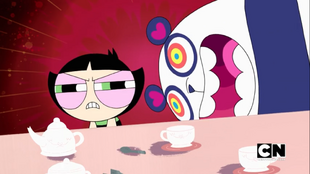 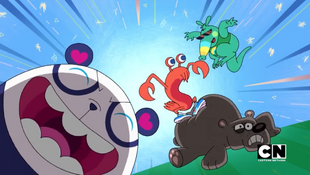 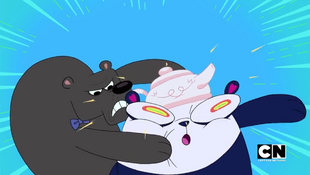 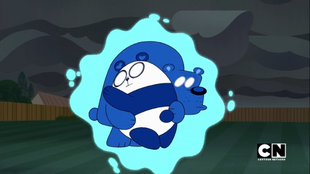 Allegro and Largo making up, forming into Cosmo Bear again.