Sergeant in the Rebel Army

Hanging out with his family.

Sergeant Allen O' Neil is the top soldier of Donald Morden and a recurring antagonist and boss in the Metal Slug series.

Allen was a high-ranked sergeant in the Regular Army, known for his impressive combat skills and toughness. He was the most trusted soldier of Donald Morden, who always gave him the most complicated missions. Allen always enjoyed fighting for Morden, as much as he enjoyed staying with his wife and son after a tough day. When Morden defected from the Regular army, Allen followed him out of loyalty, disappearing with him in the subsequent years.

When Morden reappeared as the leader of the Rebel Army and started his rebellion against the world, Allen was also with him, being a key piece on the insurgence. Allen was designated to protect the supply warehouse at the peak of the Kathehirt Valley, single-handedly slaughtering all the troops that dared to climb the dangerous mountain. When the Peregrine Falcon soldiers Marco Rossi and Tarma Roving climbed the mountain, they were forced to fight Allen. They defeated him, and he was presumed to be deceased.

Allen showed up again during the subsequent conflicts, always presumably dying in gruesome ways and coming back again as if nothing had happened.

Allen is a proud warrior with a strong sense of loyalty. He also likes to show himself, taunting his enemies during his fights.

As a Sergeant of the Rebel Army and the right-hand man of Donald Morden, Allen O'Neil is skilled in both hand-to-hand combat and weaponry. His weapon of choice is M60. Despite this, Allen is fairly agile, even more so than the Regular Army troops. Allen also possesses superhuman degrees of strength and durability, he can resist explosions and bullets, manages to come back every time he gets defeated, lift a buzzsaw with little effort, and even carry the Perfect Jupiter King's torso.

Allen O'Neil's infamous ability is his immortality. Despite being seemingly killed at numerous occasions, he is able to get back and encounter the Regular Army troops once more, thus earning his nickname the "Immortal Devil Sergeant". 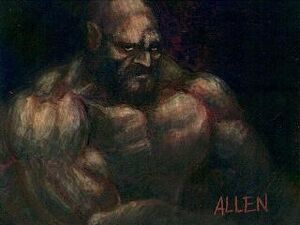 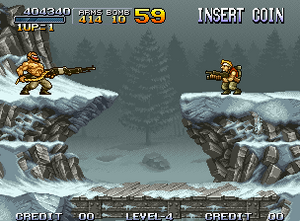