Seize control of the rest of the United States (ongoing).

Fascists
The Allied States of America is a right-wing corporate state in the dystopian post-apocalyptic former United States of the Jericho TV series.

The Allied States of America is one of the successor states to the United States, with its capital in the city of Cheyenne, Wyoming. Except for Texas, all of the states west of the Mississippi River are under its control. After the destruction of Washington DC by a nuclear device, the line of succession to the presidency was disputed by six different government officials and/or politicians resulting in six rival capitals. One of which was the junior Senator of Wyoming and former J&R executive, John Tomarchio.

It's a government controlled by the Jennings & Rall (J&R) corporation, with many former employees staffing the federal government. Resulting in Cheyenne giving the J&R corporation sweeping powers. which also applies to its paramilitary subsidiary, Ravenwood. It is a force of mercenaries whom are ex-military and Not even the regular military appears to have authority over Ravenwood.

A new constitutional convention was formed by the Allied States to write a new Constitution for America. It eliminated the right to bear arms, which was done with little debate. Prior to the convention, President Tomarchio had suspended the Posse Comitatus Act resulting in the ASA military;

Cheyenne is also attempting to indoctrinate the citizenry via propaganda through the media and history books to blame both Iran and North Korea for the nuclear attacks. They also blame the government of the former United States for permitting the attacks to happen and it's slow response afterwards, as well as the defeat in the Vietnam War.

In he aftermath of the nuclear attacks, President Tomarchio ordered that an American nuclear retaliation on both Iran and North Korea, virtually wiping the countries off the map (likely destroying the urban centers and it's government). In reality the two countries were innocent, and such action was taken both to provide the public with scapegoats and to hide the fact that certain elements in the U.S. government and the J&R Corporation were partly at fault for what happened. The nukes used by the terrorists were actually nukes that were American and John Valente the director of the Department of Homeland Security (and now a high-ranking member of the Cheyenne government) had provided the terrorists with intelligence.

Eventually it was discovered that neither the J&R corporation or their allies in the federal government had ordered the nuclear attacks. It was an ex-J&R employee (John Smith) who was seeking revenge against the J&R corporation for wrongs done to him and his family, and to save the country itself which was coming under the control of J&R. It backfired spectacularly as not only did he fail to eliminate J&R but it brought down the federal government and resulted in the fragmentation of the United States, facilitating the takeover of part of the United States by the J&R corporation through its puppet regime in Cheyenne. Only one nuke remained, and seeking to hide the fact that the attacks on Iran and North Korea were a genocidal war crime done to cover J&R's partial responsibility in the nuclear bombings, the Cheyenne government sought to recover the nuke from ex-CIA operative Robert Hawkins in the town of Jericho, Kansas and eliminate all witnesses.

When Robert Hawkins, Jake Green (the defacto leader of Jericho Rangers), and ex-CIA operative Chavez managed to get the last nuclear bomb and take it to neutral Texas, the lone star state threw in with the Columbus federal government (United States) against the Allied States of America, starting the Second American Civil War. In the comic book series which picked up where the cancelled TV series ended, the ASA launched a surprise aerial attack on Texas which caught them unprepared. It resulted in Texas surrendering and being annexed into the ASA, leading to heightened tensions between the Cheyenne and Columbus governments, the Jericho resistance rising against the ASA, and the ASA hunting down Jake Green, Robert Hawkins, and John Smith. 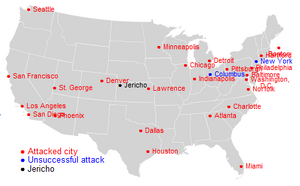 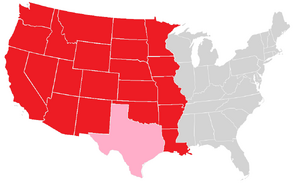 thumb|Red is ASA (Texas in the comics was annexed)

Cheyenne the capital of the ASA 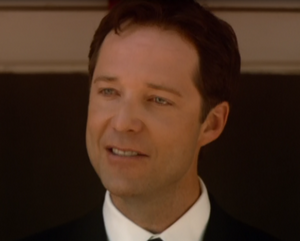 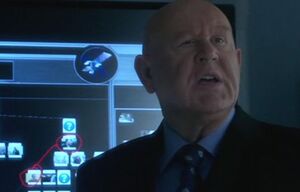 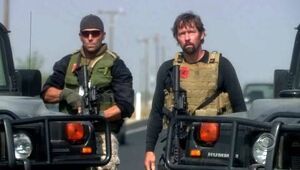 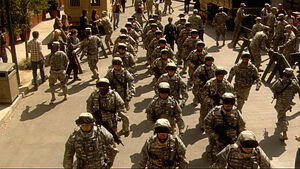 ASA soldiers
Add a photo to this gallery
Retrieved from "https://villains.fandom.com/wiki/Allied_States_of_America?oldid=2695986"
Community content is available under CC-BY-SA unless otherwise noted.