Become a journalist via dark magic.

Kill Cole for "ruining her life" (all failed).

Allison is a major antagonist in Netflix's The Babysitter and one of the secondary antagonists of the 2020 sequel The Babysitter: Killer Queen. She was a dimwitted cheerleader and a member of Bee's Satanic cult.

She was portrayed by Bella Thorne, who also played as Nina Patterson in the MTV series Scream, Holly Viola in You Get Me, Madison Morgan in The DUFF and Jolie in K.C. Undercover.

Allison is one of Bee's friends, who are Satanists looking to get what they desire through Satanic magic. Allison agreed to go along with Bee's plan, hoping to achieve her dream job of a journalist. One of their friends, Samuel, is killed by Bee as part of a Satanic ritual, as the protagonist Cole watches in horror. The group soon after collects his blood while he pretends to be asleep, only to be caught by Bee and tied up in the living room.

As Cole tries to cut the rope binding him with a pocket knife, Allison mockingly taunts him. Just when the group is convinced Cole didn't see the murder, the police show up because of a 911 call Cole made earlier. When the police enter, one of them has a poker thrown through his eye by Max and ends up erroneously firing his gun, landing a shot on Allison's breast. She sobs on the ground while her unsympathetic friends offer no support, Bee refusing to call an ambulance because of the multiple crimes that have taken place. Allison is left for dead as the group runs off to chase Cole.

Later in the night, when Cole returns to the house after inadvertently killing Max and Sonya, he finds the house cleared of almost all evidence of the murders but finds Allison sitting in a chair, seemingly lifeless. As he wanders into the kitchen, Allison makes an attempt on his life, and he fights back by punching her injured breast, an action she's hypocritically offended by. Cole attempts to reason with her, but she once again tries to kill him, lunging at him with a knife and proclaiming vengeance for ruining her life. Before she can kill him, she is killed herself by a shotgun blast by Bee, obliterating her head.

Allison fulfills the stereotype of a narcissistic and superficial teenage girl. However, her self-centered and superficial personality extends into straight-up harmful and even antisocial behavior, even willing to kill a child for indirectly harming her. Overall though, she's shown to be unintelligent and expendable, eventually being put down by the very person who got her into the mess. 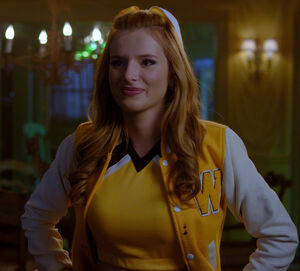 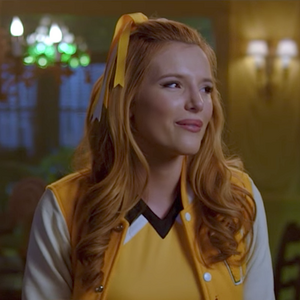 Allison is killed by Bee.