Allison Carr is the CIA Chief of Station in Berlin, as well as a recurring villainess from Season Five of Homeland.

She is portrayed by Miranda Otto.

As revealed in the episode "All About Allison", Allison first met protagonist Carrie Mathison back in 2005, when Carrie was sent to Baghdad to replace Allison at her position. She introduces Carrie to Ahmed Nazeri, a lawyer who reveals his romantic feelings for Allison to her, as well as the fact that he has stolen $8 million from the Ministry of Justice.

Allison reciprocates his romantic feelings and decides to run away with him to the island of St. Lucia, but at that moment, she is confronted by Ivan Krupin, a Russian intelligence agent who informed Allison that everything was recorded and she could face federal prison. At that moment, Krupin makes Allison a deal: work for the SVR and she could keep four of the eight million and she could move up the CIA ranks with his help.

In the events between 2005 and Season Five, Allison ordered a hit on Carrie in order to prevent her from revealing the truth about her villainous double dealings. Her involvement in the hit was revealed in the final scene of the season's fourth episode, "Why Is This Night Different?". In the scene, Carrie takes the hitman's phone and dials the one number on it, which is revealed to be Allison, who answers ""Is it done?" in Russian.

However, Carrie doesn't catch on to Allison, as she asks her for help at the end of the episode, "Oriole." Allison meets with Carrie in the aforementioned following episode, "All About Allison," while having a sniper ready to shoot Carrie at her order. After the meeting, Carrie finally learns about Allison plotting to kill her in the final scenes of the episode, when Numen hacks into Nazeri's laptop and sees a photo of him in St. Lucia. Carrie remembers Allison mentioning a bar in St. Lucia, which draws her to the realization that Allison is behind the hit.

In the season's penultimate episode, "Our Man in Damascus," Allison encounters Dr. Aziz and kills him, as part of the plan to make sure the attacks in Berlin are successful. She then shoots herself on her shoulder to divert suspicion, but when she is about to be caught, she escapes from the hospital. Allison attempted to escape in the trunk of a car driven by her handlers in the season finale, "A False Glimmer, " only to end up shot to death by a group of gunmen working for CIA head (and her former lover) Saul Berenson. 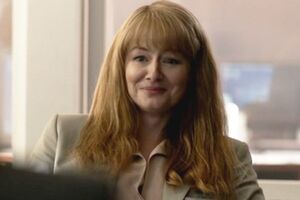 Add a photo to this gallery
Retrieved from "https://villains.fandom.com/wiki/Allison_Carr?oldid=3769772"
Community content is available under CC-BY-SA unless otherwise noted.