Legend of the Guardians: The Owls of Ga'Hoole

He was voiced by Sam Neill, who also played Damien Thorn in Omen III: The Final Conflict, Dr. William Weir in Event Horizon, Mr. McGregor in Peter Rabbit, and Charles Bromley in Daybreakers.

Allomere is a member of the Guardians of Ga'Hoole but was secretly spying for the Pure Ones as their leader Metal Beak had promised him that he would become king of the Great Ga'Hoole Tree.

When the band arrived at the tree with their story of the Pure Ones at the St. Aegolius canyons, Allomere attempted to dissuade the parliament from looking further by trying to discredit them. Ezylryb was the only member of the parliament to question Allomere's judgment and it resulted in Ga'Hoole's monarchs Boron and Barran assigning Allomere to take a search party to the canyons to determine the validity of the Band's story.

Later, Allomere returned from the scouting mission with news that his wingmen had been killed in an ambush by the Pure Ones. He had brought to the tree two moon-blinked, a catatonic state of entrancement caused by sleeping under the moonlight for a prolonged period of time, owlets, one of which was Soren's younger sister Eglantine. Angered, the Guardians invade The Beaks. Soren managed to break Eglantine's trance and learned from her that their older brother Kludd had kidnapped, moon-blinked her, and given her to Allomere. Shocked by this deception, Soren and the band quickly flew to the Guardians' aid. Soren's suspicions proved to be right: when the Guardians assaulted St. Aggie's, Allomere's treason led them into a trap; resulting in The Guardians being physically and mentally paralyzed by mind and gizzard-paralyzing "flecks," operated by bats and made of metal bits gleaned by the enslaved "Pickers" in the months before. However, when Soren and Gylfie plus Twilight and Digger arrived on the scene, Metal Beak believed that Allomere had lied when he said he would bring all of the Guardians. Stating that he could no longer be trusted, Metal Beak betrayed Allomere, who was attacked and dragged away into a dark cave by several bats.

In the Legend of the Guardians video-game, Allomere serves as mentor to a Guardian named Shard. It is also revealed that after being taken away by Metal Beak's bats, Allomere escaped and encountered Shard, who discovered that Allomere was responsible for his parents's deaths and later battles and kills his former mentor. 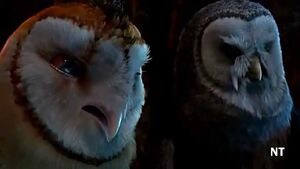 Allomere dragged off by the bats to be killed, though he would survive this. 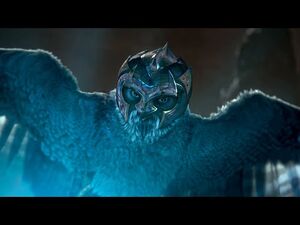 Legend of the Guardians - Allomere Is A Traitor 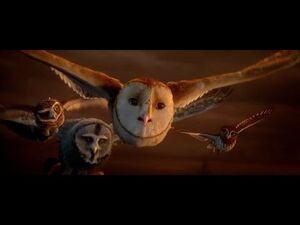 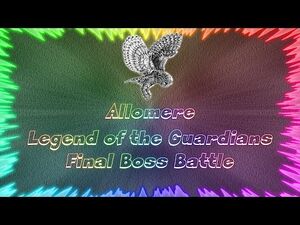