Alma Negra (Dark Soul) is a recurring villain from the Mexican series El Chapulín Colorado. He was portrayed by Ramón Valdez, who also portrayed the villains El Tripaseca and El Rascabuches in the same series.

Born in the year 1720, Alma Negra is a famous pirate captain who, along with his pirate crew, sailed the seven seas and accumulated a lot of treasure. Nobody knows where he hid his treasures, because he would always kill those who helped him bury them. Even after his death, Alma Negra would continue to haunt his treasure, appearing as a ghost to his descendants and guiding them to protect it.

A two-parter episode, it begins with Alma Negra calling two of his subordinates, Sabandija and Panza Loca, to help him bury his treasure. Knowing they would be killed to hide the treasure's location, they call upon Chapulín's help. The two explain the situation to Chapulín, but soon he is confronted by Alma Negra's right-hand man, Matalote, who tells him Alma Negra wanted to talk with him. Chapúlin tries to run away, but Alma Negra shows up and orders him to bring him wine. While Alma Negra is drinking Chapúlin hits him with a chair, causing him to fall down after he pulls the wine from his hand.

Matalote confronts Chapúlin but Alma Negra soon wakes up and promises to kill him, so Chapúlin is joined by Sabandija, claiming the two of them could take him and Matalote down. During the discussion Chapúlin tricks Alma Negra and takes his gun, but inadvertently returns it to the villain while searching him for another gun. Chapúlin, Sabandija and Panza Loca are locked away in a cell, but they are helped by the waitress from the pirate crew, who gives them tools to escape. Though they escape after removing a rock from the wall, they're surprised by Alma Negra in the next room.

Alma Negra takes Chapúlin and the other prisoners with him to bury the treasure, but Panza loca manages to escape when another of Alma Negra's goons, Lagoa Seca, gives him money to buy cigarettes. Suspecting the waitress helped them escape he asks her to serve him wine, but orders Chapúlin to drink it, believing it was poisoned. Chapúlin asks for some juice which she also serves, so the two start tricking each other to look behind in order to switch the drinks. Chapúlin manages to outsmart Alma Negra, who is knocked unconscious after drinking the wine, which had sleep drugs. Matalote confronts them again and takes everyone back to the cell, while Alma Negra swallows the cell key.

Unable to escape, Chapúlin and the other prisoners are taken away to bury the treasure, but Sabandija accidentally hits Alma Negra with a shovel, so Chapúlin takes the opportunity and knocks Matalote as well, after which the group attempts to escape into a cave. In the end Alma Negra and Matalote catch up with them however, the episode ending on a cliffhanger.

The episode begins with Matalote ordering Sabandija and Panza Loca to watch over a cell where Alma Negra locked Flor Marina, a woman he intended to marry, however Flor Marina tricks Sabandija and escapes. Knowing Alma Negra would kill them for letting her escape, they call for Chapulin's help. Chapulin appears but so does Alma Negra, who orders Matalote to lock them up and to look for Flor Marina, otherwise he would end up locked with them as well.

The episode continues with Chapúlin, Sabandija and Panza Loca attempting to escape. Having found Flor Marina, Alma Negra spares Sabandija and Panza Loca but keeps Chapúlin imprisoned with Flor marina, who still refuse to marry the villain. Chapúlin uses one of his Chinquitonilla pills to shrink, escaping the cell and picking the key to release Flor Marina. Since the door of the place was closed Chapúlin picks up a dynamite and lights it up, blowing the door. Alma Negra, who was behind the door, is caught in the blast, letting Chapúlin and Flor Marina escape before fainting.

A woman driving on a storm stops at a old tavern and is greeted by the place's owner, who tells her he is a descendant of Alma Negra. The woman sees Alma Negra's ghost so she calls Chapúlin, who initially thinks she's imagining things. Meanwhile Alma Negra speaks with the tavern owner, telling him to dig a hole to find his treasure.

After the woman goes into another room, Alma Negra appears to Chapúlin and attempts to scare him off. The woman finds a skeleton, apparently that of Alma Negra himself, chained to a vault. She tells the tavern owner he was tricked, as the pirate's treasure had been there all along. However Alma Negra appears in corporeal form and scares her off, taking Chapúlin into a hole which makes him fall into the hole the tavern owner was digging. The woman once again sees Alma Negra's ghost and calls Chapúlin, who again tells her she's imagining things, though while they're talking Chapúlin notices he's been imagining the woman as well.

A couple who's about to be evicted from their home calls Chapúlin to help them get some money to pay the rent. While discussing, Chapúlin accidentally drops a old book and upon reading it discovers it is the diary of Alma Negra and that the man was his descendant. The book reveals Matalote betrayed Alma Negra, who hid his treasure on a old tavern and left a map to locate it. Chapúlin and the couple find the tavern, but are ambushed by Matalote V, descendant of Matalote, who asks them for the map. Since they don't give it the villain ties Chapúlin and the couple, leaving them on the tavern to get haunted by Alma Negra's ghost.

Alma Negra eventually appears in his ghost form, but surprisingly decides to help the heroes just so a descendant of Matalote wouldn't end up with his treasure. Matalote V, who intended to kill them with a cannon end up caught in his own trap after Alma Negra tricks him

Alma Negra appears dressed in a traditional pirate attire. On his first appearance he has short hair, while on later episodes he has longer hair and wears a brown trenchcoat. Though he wears a eyepatch his eye is fine, as he claims it was just part of the pirate costume he borrowed.

He is known to be a ruthless pirate, being credited for killing the Dead Sea and painting the Red Sea red with blood. He doesn't trust anyone, not even his own shadow (being proven right when his own shadow attempts to attack him), this being the reason for him killing the people who help bury his treasure.

Alma Negra also loves to torture his prisoners and those who betray him, having once used a football commentator as a battering ram to topple a brick wall and forcing a prisoner to watch political propaganda 24/7. 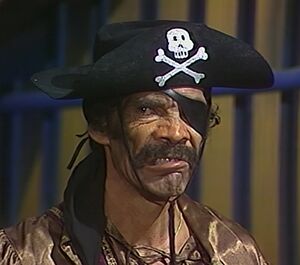 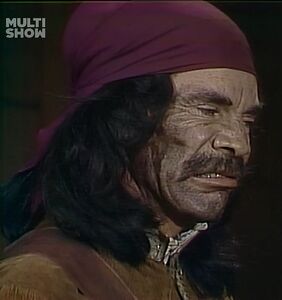 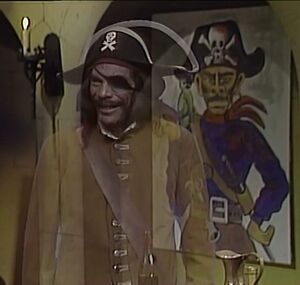 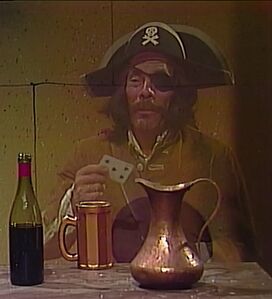 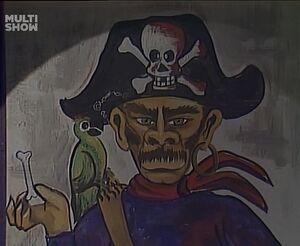 Retrieved from "https://villains.fandom.com/wiki/Alma_Negra?oldid=4125749"
Community content is available under CC-BY-SA unless otherwise noted.