Mother (by her sons)

Killing and torturing people as she pleases.

Seek revenge on those who wrong her.

Torture and kill as many humans as she can.
Destroy humanity.
Have a child with Michael Becket (succeeded).

Alma Wade is the main antagonist of the F.E.A.R. series. She is a powerful spirit who seeks revenge against humanity, due to their invasive implementation of her and her powers in a series of experiments and secret projects.

After being subjected to years of cruel experimentation by Armacham Technology Corporation during Project Origin she sought violent revenge against the organization using her many supernatural powers. She usually appears in child form and later when released, her true body is a young decimated woman. She later appears in a young healthy adult form in F.E.A.R. 2 after being attracted to protagonist Michael Becket, who she rapes, resulting in her to become pregnant.

In F.E.A.R. 3, she does not attack you because she is pregnant with a baby (implied to be a girl) she conceived with Michael Becket and to avoid the Creep (who is the manifestation of her father Harlan Wade). In Point Man and Fettel's endings, she gives birth to the baby and both of them wanted to father him/her, and in Point Man's ending, she disappears while in Fettel's ending she was eaten/absorbed by Fettel possessing Point Man's body.

She seemed to be a helper, especially in her child form, in the F.E.A.R. expansions Extraction Point and Perseus Mandate. Rather than attacking the player, she assists them for example when she kills the Replica soldiers in the subway she tells Point Man that he is safe now. 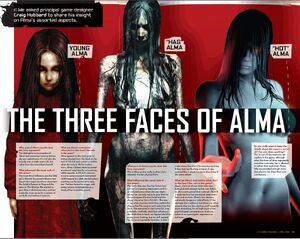 The three faces of Alma throughout the trilogy. 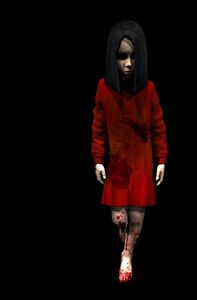 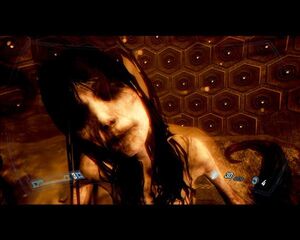 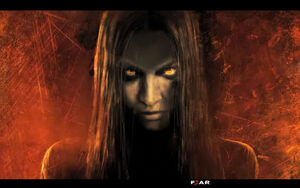 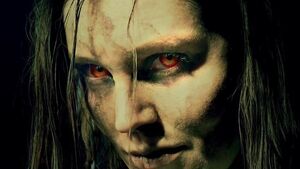 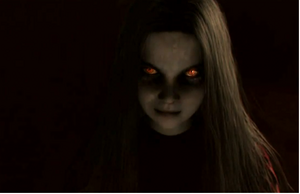 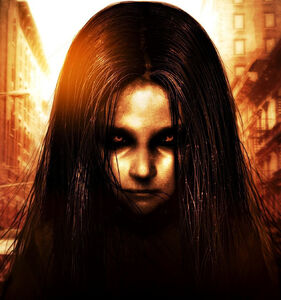 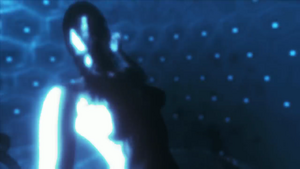 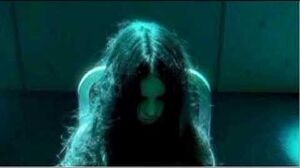 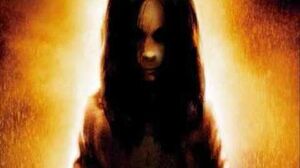 Retrieved from "https://villains.fandom.com/wiki/Alma_Wade?oldid=4085378"
Community content is available under CC-BY-SA unless otherwise noted.