Villains Wiki
Register
Don't have an account?
Sign In
Advertisement
in: Mature, Anime Villains, In Love,
and 42 more

Head of the Trancy household

Jim Macken, better known as Earl Alois Trancy, is the main antagonist in Kuroshitsuji II/Black Butler II. He is the head of the Trancy household.

He is voiced by Nana Mizuki in Japanese and Luci Christian in English.

Alois is a young man with light blonde hair and icy blue eyes. He wears a long plum frock coat, a dark green vest with black lining and a black back, a white button-up shirt, shorts, long black stockings, brown high heel boots with purple laces, and a dark grey-black ribbon tied around his neck. He holds his Faustian Contract mark with Claude Faustus - an encircled, gold, and red pentagram-like shape - on his tongue. His contract mark is invisible at all times, and is mainly only shown if Claude is nearby.

Alois seems to have an overall effervescent and cheerful disposition in spite of hardships and misgivings. However, his emotions are quite unpredictable and suspicious, fluctuating from enthusiastic and hyperactive to angry and cantankerous the next and he loses interest in things fairly quickly. Alois often uses harsh and impolite language, such as "bloody" or other swears, regardless of whom he is speaking to. One of his few consistent traits is his attachment and dependence to his butler, Claude, whose attention he is frequently trying to attract. His horrific childhood, which contained no parental figures, is the likely cause of his extreme need for affection and acknowledgment from Claude. Though his harsh temper was evident even in childhood, his sadistic streak, bizarre promiscuity, and crude language stem from the sexual abuse that he received shortly before contracting with Claude.

Alois enjoys the authority of a noble, he obtains and utilizes his power sadistically. In order to feel dominant, he abuses others and makes them feel uncomfortable and inferior for his own satisfaction. However, Alois particularly directs the cruelty to Hannah. He frequently abuses and demeans her with opprobrous and vile remarks when he believes that she is trying to take someone else's attention away from him. Despite how he mistreated her, Hannah later admits that she has loved Alois the whole time and his attitude towards her changes completely; he accepts her loving him since he can no longer gain any of the acknowledgment he sought from Claude.

The unofficial story is that shortly after he was born, Alois was kidnapped and his mother, in her deep grief, committed suicide, leaving his father to search for him alone.

During his time spent kidnapped, Alois says that he was kept as a slave in an unknown village. An event which occurred in this village left all the villagers dead, leaving Alois as the only survivor. Alois then returned with Claude and soon became the Trancy household's lord after his father died under mysterious circumstances, an occurrence his uncle, Arnold Trancy, finds suspicious.

It is divulged that he is actually Jim Macken, an orphan from the village. He and his little brother, Luka, had been treated unkindly by the villagers since their parents died, forcing them to survive as thieves and pickpockets. Jim expresses a bitter hatred of the villagers and says everyone who was cruel to them ought to die. When a mysterious calamity sweeps the village, killing nearly everyone including Luka, Jim is taken in with a group of other boys by the Head of the Trancy Estate who keeps them as a pedophilic harem. While in captivity, Jim hears rumours about a fairy that grants wishes, and after following the instructions he is given, he summons the spider demon, Claude.

Despite that, he realizes he has no wish to fulfill, and Claude tells Jim to call for him again when he finds a wish.

Though Earl Trancy originally despised him for his defiant attitude (saying he had "dirty eyes"), Jim sets about seducing him, becomes his favorite bedmate and then his heir. Jim, parading from then on as Alois Trancy, receives favourable treatment such as fashionable clothes and more freedom in the mansion from the Earl. During a meeting, Alois discovers that the person who is allegedly responsible for the strange deaths in the village was another demon, Sebastian Michaelis, during his contract before Ciel Phantomhive. Alois then forms a contract with Claude. When the head of Trancy dies, Alois becomes the new Earl and releases all the captive boys, vowing revenge on Sebastian.

Alois is seen making a contract with Claude Faustus; the contract seal resides on Alois' tongue. At breakfast, he complains that a sunny-side-up egg seems pitiable, and spills wine on purpose to attract Hannah's attention. He then pretends he is hurt and screams, and he tells Hannah that it is not appropriate for a maid to look her lord in the eye. Then he sticks his fingers into Hannah's eye socket. When Arnold Trancy arrives, Alois greets him. He tells Arnold of when he was kidnapped as a child. When Arnold is about to go home, Alois scatters banknotes and land agreements onto the ground from the balcony, mocking his greed. Later, a traveler revealed to be Sebastian Michaelis arrives. Alois greets him seductively and tells Claude to allow the strange man to stay with them. Alois finds out that Sebastian had been hiding Ciel in his suitcase. Alois wants Ciel, but neither he nor Claude is able to catch up to him and Sebastian when they flee.

Later, Alois gets bored in picking a costume for his costume ball and tells Hannah to strip so that he can wear her dress. He tries to put a dress on Claude, but his butler refuses. At the party, he disguises himself as a maid with long blond hair and tries to seduce Ciel. He takes Ciel's eyepatch and runs away. Despite his disguise, Ciel acknowledges his identity.

Afterwards, Alois holds a costume ball to persuade Ciel, Sebastian, and the Phantomhive household to come to the Trancy manor. He lets his butler talk with Sebastian but tells him to settle the matter in ten minutes. However, Claude later returns with Sebastian alive and Alois opts to punish Claude but the latter refuses. Soon after, Alois angers Ciel by dancing with Elizabeth Midford. He vows to "have" Ciel while Ciel vows to kill him.

Consequently, he duels with Ciel. He corners Ciel at first, but as the butlers arrive, he gets stabbed in his stomach and bleeds profusely. Alois is mocked by Ciel, who believes that Alois killed Ciel's parents. Alois tries to explain, telling Ciel that they are both the same as they are being deceived by a demon. He begs and cries as he holds onto Ciel's leg. Ciel is about to strike him dead when Claude finally stops him. In separating them, Claude inadvertently tastes Ciel's blood and nearly swoons in ecstasy; he does not help the wounded Alois, who vomits a gush of blood before passing out.

Alois's past as 'Jim Macken' is revealed; he was a slave to the head of the Trancy. He overhears his friends talking about summoning a fairy. He meets Claude and keeps in touch with him. When he enters a room as a slave to the former Trancy Head, he makes a wish, and Claude offers to form a contract. Back in the present, he is saved from Grell by Hannah, and crawls to a tree. Moments before he is killed, Alois reveals that Claude was the most important person to him in the world and clings to him in desperation but his soul is stolen from his body by Claude and stored within the Trancy ring. Hannah is seen sticking her fingers to Alois's left eye after his body has been left beneath the tree by Claude, murmuring to his corpse about his "wish".

The ring Alois wore in life which also contains his soul is now being worn on Ciel's finger and his memories have been mixed in with Ciel's. He soon takes control of Ciel's body and climbs to a clock tower in front of the mansion. Alois then creates a maze in which Sebastian and Claude must solve to get to Ciel's body. Claude takes a head start because of his knowledge of Alois. Ciel's soul briefly breaks through and orders Sebastian to remain his butler until he has consumed his soul entirely, but Alois once again takes control of Ciel's body. Alois states how much he was attached to Claude and allows Claude to get every answer right in the maze of his heart. Upon learning that Claude murdered him in order to get to Ciel, Alois has an emotional breakdown. Hannah reveals of how Luka, his brother, have contracted to her in order to destroy the village he and Alois grew up in for Alois's sake.

Alois makes a new contract with Hannah after he realizes that both she and Luka have always loved him. In return he states that they are the people he should be loving and adds that everyone who never truly loved him should be annihilated. Before fainting he tells Claude that he wanted his love as at that time his heart was trapped in a cobweb. After Alois is brought to a demon sanctuary with Hannah, Claude and Sebastian, Alois talks to Ciel in his subconscious thoughts as they wait for their butlers to finish dueling. It is later revealed that his wish he made with Hannah was for Ciel's soul to never get eaten, and for Alois to join Luka in Hannah's body. When Claude loses the duel and dies, Alois is shocked and sad and subsequently disappears from Ciel's body. Hannah claims that she, Alois, Luka and Claude will be eternally happy in Nirvana as they are seen falling into a whirlpool. 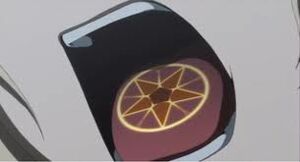 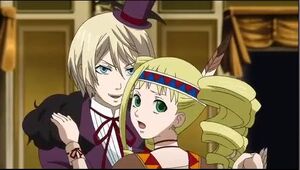 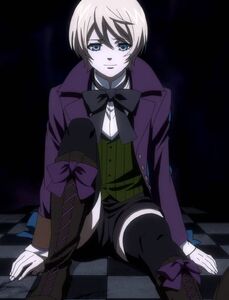 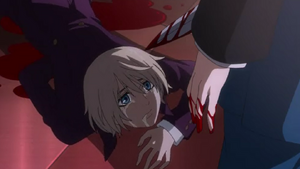 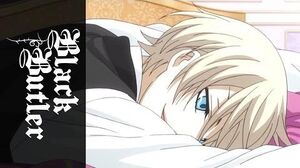