Kill Officer Jake Hoyt and steal money in order to pay off a large debt to Russian gangsters (failed).

Alonzo Harris is the main antagonist of the 2001 American crime thriller film Training Day. He is a corrupt narcotics detective who works for the Russian mob, and who tries to corrupt rookie detective Jake Hoyt.

He was portrayed by Denzel Washington, who won an Academy Award for his role in the film.

L.A.P.D. Detective Sergeant Alonzo Harris has sunk so deep into the depths of his line of work that he has corrupted himself to the point where his own life has become the target of a foolish debt to be repaid. He has more of a gangster rather than a decent cop. And on this particular Training Day, Alonzo has just begun to mentor young Jake Hoyt, a rookie cop who still possesses the ideals of every bright-eyed rookie police officer.

As Alonzo exposes Jake to the harshness of the streets where many a drug deal takes place, he also reveals his own questionable tactics in fighting the criminal element, whether that means intimidating the "animals" at will or misrepresenting themselves with fake search warrants, revealing he favors street justice rather than legal justice. Alonzo also manipulates his new student, going so far as to hold a gun to his head to get him to smoke drugs, which turns out to be a clever blackmail device later on. He is incredibly selfish and arrogant, thinking he owns the city of Los Angeles and caring only for himself, not hesitating to throw away his allies and friends if it benefits him. He is convinced himself his questionables tactics and ways are justified, as long as the bigs criminals gets arrested as a result.

However, as the subsequent events begin to reveal his motivation (a large debt is owed to Russian gangsters by the end of the day), Jake's morals collide with Alonzo's master plan. With the exception of his girlfriend or son, neither friend nor foe will stand in his way, and this constant deception, wrath, distrust, and disrespect for others leads Alonzo to his downfall. Nearly everybody, except maybe his personal squad, are afraid of him or hate him. At the end of the Day, honor indeed prevails and Alonzo gets what he deserves. As he is trying to escape to Los Angeles International Airport, he is ambushed by the Russian Mafia and brutally killed with machine-gun fire as he stops at a red light, ironically getting killed the one time when he followed the law.

Alonzo is charged first to train the young idealist recruit Officer Jake Hoyt. Alonzo is presented as a star among the anti-drug, very decorated and professional of street's wars aboard his black Chevrolet Monte Carlo. For Jake's first arrest, they are dealing with young students who have bought cannabis and PCP. Alonzo brutally seizes their drugs, by pinching the ear of the driver and threatening them to confisc their vehicle and let the MS-13 gang (from whom they bought the drugs) rape the girl with them. Jake is little intrigued but doesn't care too much on Alonzo's way for the moment.

Alonzo traps Hoyt by making him smoke angel dust or PCP and making him believe that it is an initiation test. First, Hoyt refuses but Alonzo gets angry and threats Jake at gunpoint, telling to get away from his car. Jake is resigned to smoke it. Then they go to Roger, Alonzo's informer and one of the biggest traffickers in Los Angeles. They chat over a drink with a Hoyt obviously drugged. Then they find themselves driving in the street when Hoyt sees a rape scene. He gets out of the car and rushes to save the girl, it turns out that she is the cousin of members of the Hill Side gang. He fights against two types and neutralizes them. Alonzo arrives at the crime scene, searches the attackers, a white and a black drug addict. Alonzo offers one of the attackers either to go to prison or to burst a testicle for them, after the latter tells him to "suck his dick". The aggressor, the black one, does not want to go to prison, he accepts Alonzo's proposal. Hoyt is shocked by Alonzo's way of enforcing justice. Alonzo replies that his investigations have led to 15,000 years of incarceration. Alonzo tries to convince Hoyt that he is a wolf to save the sheep from a merciless world.

Then he arrives on the street to arrest a wheelchair crack dealer. He runs away, Hoyt pursues him and calls him into a Korean business. The dealer ingests the drugs. Alonzo arrives, questions him, the suspect refuses to cooperate. Then Alonzo takes a ballpoint pen, puts it in his mouth and makes him regurgitate the crack from his stomach. Alonzo blackmails him between the prison or give him the name of his supplier. The dealer gives him a name, Sandman. It turns out that the latter is in prison. He goes to his wife's house without a warrant but pretending that he has one. Alonzo searches the house and steals money, $ 40,000. The woman notices and yells at the local gang to shoot them. Hoyt is more and more perplexed about Alonzo's methods. Alonzo still manages to reason with him. Then they go to the most sensitive Afro district of the city. To warn of their arrival, pigeons are launched into the air. They get out of the car and go into the neighborhood. In fact, Alonzo goes to visit one of his Salvadoran fiancées, Sara Harris. Hoyt is waiting for them with a child who turns out to be Alonzo's son.

Subsequently, they go to a restaurant to meet the police, the three wise men. They discuss Alonzo's problems with Russians. Indeed, during the previous weekend, Alonzo was in Las Vegas and beat up a boss of the Russian mafia, who apparently insulted him. In compensation, the Russians asked him to pay a ransom to save his life. Alonzo arranges with the three wise men to extort Roger's personal money, Alonzo's informer. The money taken from Sandman's wife will be used to pay for an arrest warrant for Roger. Alonzo gathers his usual police team for the assault. They enter Roger's house, question him, start digging the floor and find four million dollars. Alonzo explains that they will declare three million dollars and that they will share the rest between themselves. Hoyt refuses. Then Alonzo asks Hoyt to assassinate Roger, he refuses and Alonzo is forced to kill Roger himself. Alonzo organizes the staging to create evidence and to justify the death of Roger. For the staging, one of the team members receives two bullets in his bullet-proof vest (he is seriously wounded by the second one however) and Alonzo asks Hoyt to declare he shooted on Roger by invoking self-defense. Hoyt is extremely shocked by what just happened and revolts. Alonzo threatens him and tells him that the team will cover him, otherwise the investigators will ask him to take a blood sample and find traces of PCP, which will at best result in his radiation. At the last moment, Hoyt feels obliged to accept but refuses Alonzo's money. The latter still tries to reason with him.

Then they go to a house in a Latin quarter, Alonzo gives a gift to the owner, the gang leader of the Eastside. Alonzo pretends to go to the bathroom, while Hoyt is invited to a poker game with the gang leader and two other people. As the game progresses, he gives his revolver to one of the members who wants to see it. Then, Hoyt realizes that Alonzo is gone, leaving him alone with the gang. The gang leader explains to Hoyt, that Alonzo owes the Russians a million dollars and that if he does not pay it in time, a team of killers is on standby ready to intervene after midnight. Members are instructed to kill Hoyt. They bring him into the bathtub to kill him. They pocket him, find the wallet which turns out to be that of their cousin, the one who was saved the same morning by Hoyt. The chief calls his cousin and after verification, the members decide to release him.

Hoyt, outside, goes to Alonzo's fiancée district to arrest him. He arrives in the apartment and has the door opened by Alonzo's son. When he is about to stop him, Alonzo throws his cigarette butt in his face, grabs a shotgun under the bed and shots are exchanged. Alonzo runs out of the window. Hoyt comes up to him and they fight on a balcony. Alonzo takes over and runs away in his car but Hoyt jumps on his hood and Alonzo has an accident. In difficulty, he asked the locals to take Hoyt down: they refused, telling him that they didn't have to do his job. Alonzo tries again to coax Hoyt, he wants to pick up his gun but Hoyt shoots him in the buttocks. Hoyt seizes the money Alonzo owes to the Russians and leaves, protected by the gang's members who have become tired of Alonzo's arrogance. Alonzo, enraged, yelled at them and threatens to have them all arrested. He is ignored by the locals, who know he is powerless now. Resigned, he takes his car, almost in wreckage, and drives towards the Los Angeles International Airport to escape. When midnight arrives, he is blocked by black vans and assassinated by the Russians.

It's likely since Jake turned in Alonzo's money as evidence, Alonzo's reputation as an honorable LAPD detective would be tarnished.

Alonzo's first meeting with Officer Jake Hoyt in a diner.

Alonzo takes Hoyt to the house of one of his supposed "friends", who is actually an infamous drug dealer.

Alonzo threatening a street thug who was attempting to rape a young girl.

Alonzo interrogating another suspect after Hoyt chases him down.

Alonzo telling Hoyt to toughen up in order to be on the same level as him.

Alonzo with his family.

Alonzo being held at gunpoint by Hoyt after he witnesses his corrupt acts.

Alonzo trying to give Hoyt words of comfort in his car.

Alonzo trying to kill Hoyt after he attempts to arrest Alonzo.

Alonzo is shocked when the Bloods gang members allow Hoyt to walk away with his money.

Alonzo's dead body after getting shot by the Russians. 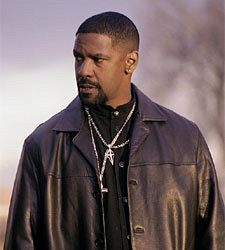 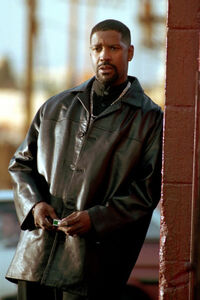 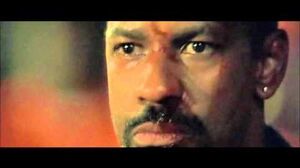 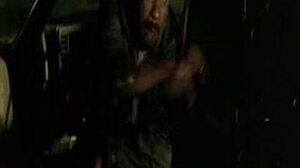 Training Day (Alonzo gets killed)
Add a photo to this gallery

Retrieved from "https://villains.fandom.com/wiki/Alonzo_Harris?oldid=4176182"
Community content is available under CC-BY-SA unless otherwise noted.