Kill Officer Jake Hoyt and to steal money to pay off a large debt to Russian gangsters (all failed).

Alonzo Harris is the main antagonist of the 2001 American crime thriller film Training Day. He is a cop who has sunk far too deep into the criminal underworld, corrupting himself in the process.

He is portrayed by Denzel Washington, who won an Academy Award for his role in the film.

L.A.P.D. Detective Sergeant Alonzo Harris has sunk so deep into the depths of his line of work that he has corrupted himself to the point where his own life has become the target of a foolish debt to be repaid. And on this particular Training Day, Alonzo has just begun to mentor young Jake Hoyt, a rookie cop who still possesses the ideals of every bright-eyed rookie police officer.

As Alonzo exposes Jake to the harshness of the streets where many a drug deal takes place, he also reveals his own questionable tactics in fighting the criminal element, whether that means intimidating the "animals" at will or misrepresenting themselves with fake search warrants. Alonzo also manipulates his new student, going so far as to hold a gun to his head to get him to smoke drugs, which turns out to be a clever blackmail device later on.

However, as the subsequent events begin to reveal his motivation (a large debt is owed to Russian gangsters by the end of the day), Jake's morals collide with Alonzo's master plan. With the exception of his girlfriend or son, neither friend nor foe will stand in his way, and this constant deception, distrust, and disrespect for others leads Alonzo to his downfall. At the end of the Day, honor indeed prevails and Alonzo gets what he deserves. As he is trying to escape to Los Angeles International Airport, he is ambushed by the Russian Mafia and brutally killed with machine-gun fire.

Alonzo's first meeting with Officer Jake Hoyt in a diner

Alonzo takes Hoyt to the house of one of his supposed "friends", who is actually an infamous drug dealer

Alonzo interrogating another suspect after Hoyt chases him down

Alonzo with his family

Alonzo trying to give Hoyt words of comfort in his car

Alonzo trying to kill Hoyt after he attempts to arrest Alonzo 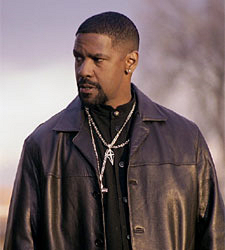 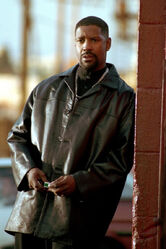 Retrieved from "https://villains.fandom.com/wiki/Alonzo_Harris?oldid=2635117"
Community content is available under CC-BY-SA unless otherwise noted.