Member of the Foot Clan (formerly)

Find her place in life.

Destroy enemies of the Shredder and Foot Clan (formerly).

Alopex is a mutant arctic vixen appearing in the IDW Teenage Mutant Ninja Turtles comic series. She served as a member of the Foot Clan under the orders of The Shredder, until she came to realize the evil the Shredder truly embodied.

Prior to her mutation, Alopex was the lead huntress of her pack, being a feared and respected entity by all creatures around her. The one exception to this was a savage bear that threatened Alopex's hunts and existed as the one thing she feared. Eventually, she was captured and experimented upon by human scientists. These experiments granted her a humanoid intelligence and form, but made her feel all the more alienated from her home. She escaped the facility when she was "rescued" by the Foot Clan's leader, the Shredder himself. Seeing this as a new purpose in life, Alopex came to serve her new master.

In many of her appearances, Alopex comes into direct conflict with the Turtles as one of the Shredder's henchwomen and enforcers. She first attempts to trick them into leading her to their lair, so that she may set up a Foot Clan ambush. Unfortunately for her, Raphael catches onto her plot and confronts Alopex, foiling the vixen's attempt and forcing her into retreat. She also undergoes a notable confrontation with Master Splinter. The old master informs her that he is quite aware of her past and situation, and tries to argue that she should choose how to live her own life rather than serving the Shredder. Alopex retaliates by stating that she chooses to kill him on behalf of her master. Splinter is able to incapacitate and defeat Alopex with ease, noting that she as a student still has much to learn. She recovers and fights alongside her master as the battle continued, but is eventually defeated once again.

Despite assuming this new life as her purpose, Alopex still feels an attachment to her old home and way of life. The Shredder determines this sentiment and has Alopex's original forest home burned to the ground as a test of loyalty. Seeing the Shredder as a monster akin to the bear that threatened her hunts in the past, Alopex flies into a rage, but is quickly beaten down and forced into swearing her loyalty. Alopex chooses to remain as a loyal servant, but only with the aspiration to one day kill him.

Alopex receives her chance during a fight between Splinter and the Shredder, taking advantage of the confrontation to make her move. Unfortunately, Alopex fails to kill the monster, as she is warded off by Karai. In spite of her failure, Alopex is able to survive and escape. Seeing how she no longer had a purpose within the Foot Clan, Alopex follows the Turtles in hopes of making amends. She undergoes struggles due to their history, particularly with an extremely suspicious Raphael. Things are made much worse when members of the Foot Clan attack, leading Raphael to assume that Alopex purposely led them there. However, she proves her change of character by fighting the Foot Clan members and saving Raphael in the process, thus making her desertion of the Foot Clan official.

Already being a skilled hunter in her pre-mutation days, Alopex demonstrates incredible agility and combat skills as a Foot Clan ninja. The vixen makes use of her claws and twin kama in battle, proving to be somewhat formidable, even with her failures noted over time. However, she also tends to act on anger when it concerned stronger opponents, such as Splinter or the Shredder, which puts her into situations where she is outmatched. Nevertheless, her skills benefit her in the long run, allowing her to survive despite numerous odds against her.

However, she also demonstrates a desire to feel a place in life. As noted, her transformation into a humanoid animal like the Turtles made her feel alienated from her old life. Thus, her villainy within the Foot Clan has much of its roots in a desire for a sense of purpose, becoming loyal to her "master" due to the "opportunity" he presented her. This desire to belong also extends towards her later relationships with the Turtles, particularly in how she bonds with Raphael despite their initial, mutual animosity over their experiences of formerly not belonging before meeting up with people, for good or ill. 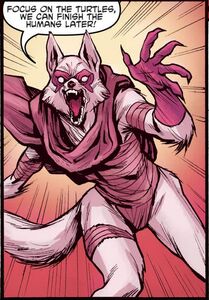 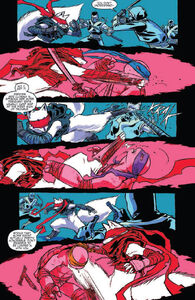 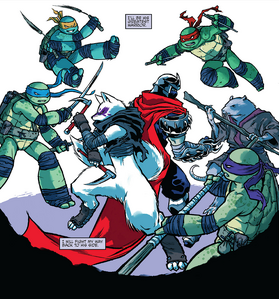 Alopex fighting with the Shredder. 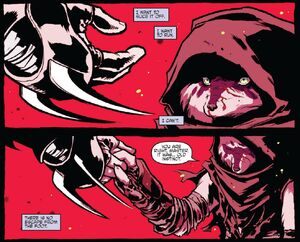 Alopex surrendering for a while. 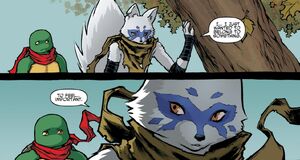 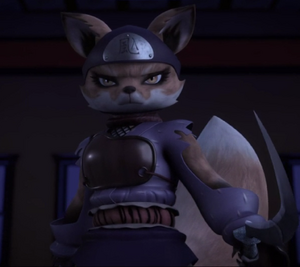 Alopex in TMNT 2012.
Add a photo to this gallery

Retrieved from "https://villains.fandom.com/wiki/Alopex?oldid=3532536"
Community content is available under CC-BY-SA unless otherwise noted.