Villains Wiki
Register
Don't have an account?
Sign In
Advertisement
in: Doctors and Scientists, Psychopath, Bio-Engineered,
and 27 more

Doctor Aloysius James Animo, temporarily known as D'Void in the Null Void is a supervillain scientist and a major antagonist of the Ben 10 franchise.

He was once a promising researcher in veterinary science. His career was cut short when it was discovered that he was performing twisted genetic experiments on animals. He had hoped that his research would win him the Verties Award, which is an award in veterinary science. Because of the nature of his research, he lost the award to another doctor, named Kelly. This drove him mad, and he dropped off the map for five years until he could perfect his research. In the episode "Washington B.C", he finally finishes his work. For some reason, his skin is currently yellowish-green. A picture of him on Gwen's computer shows that he had normal skin in the past.

He is voiced by Dwight Schultz, who also voiced Technovore in The Avengers: Earth's Mightiest Heroes, Attuma in Avengers: Assemble, Charon and Helios in God of War: Chains of Olympus, General Wilhelm Strasse in Wolfenstein: The New Order, Professor Pyg in Batman: Arkham Knight, and The Vulture in Marvel's Spider-Man.

By using the Transmodulator, a device of his own design, Animo can mutate animals into giant versions of themselves. The second phase of his work involves reanimating dead cells, literally bringing dead animals back to life. All of this is in pursuit of the award which he had lost. His quest ends in failure, since Ben was there to stop him, reversing the effects of his Transmodulator by damaging it. He is arrested in that episode.

He appears again in the episode "Dr. Animo and the Mutant Ray", where he creates a much larger version of the Transmodulator using the broken-off faceplate of the Omnitrix. This version mutates living creatures with alien DNA, creating odd mixtures of alien and terrestrial creatures, such as a "Heatbat". Before he can complete his plans to use a satellite to shoot the ray all over the world, Ben stops him with Gwen's help. Since his mutants were never shown being cured, it is possible that they are still around. For some reason, his trademark giant frog is also present, though he may have simply re-mutated it sometime after his original defeat. How and when he escaped is unknown.

In "Ben 10,000", Animo is still alive, though his head is the only part of him that remains. However, it controls a unique apparatus that allows him to attach himself onto animals specially reformatted with a device (in this case, an albino gorilla) and control them. He was the one responsible for creating Exo-Skull and reviving Vilgax. He is defeated by both Gwen and her future self, Gwendolyn, as well as a cybernetically-enhanced Grandpa Max.

The animals he has mutated or reanimated include a mammoth, a Tyrannosaurus Rex, a bat, a cockatoo, a hamster, a rhinoceros, a seagull, a squid, a hornet, and his trademark frog. Vilgax could be counted in as one of the creatures since Animo reanimated him. The same goes for Grandpa Max in "Dr. Animo and the Mutant Ray", when Animo turned him into a slug-like creature.

In "Divided We Stand", it is revealed that his first name is Aloysius. He escapes what seems to be Alcatraz Island on a mutant seagull and captures one of Ben's Dittos to access the DNA stored in his Omnitrix. He creates an army of self-replicating Lepidopterran mutants, but they are destroyed and he is captured again. Afterwards, Max deletes all of his computer files, preventing him from using any more Omnitrix DNA in his experiments if he escapes again.

He also appears in "Ben 10:Secret of the Omnitrix", but only as the instigator of the main plot. In it he tries to create a DNA bomb that was designed to devolve all life on Earth. He is defeated and the bomb is disabled, but a stray burst of energy is still emitted by it. Ben's Omnitrix absorbs the energy, causing it to start a self-destruct sequence and therefore beginning the plot.

He makes a brief appearance at the end of Goodbye and Good Riddance, wearing an ape-like exo-suit, and leading a group of animal mutants towards Ben's school.

Animo appears in Ben 10: Protector of Earth as the main antagonist of the Southeast. He battles in a robotic gorilla suit. He kidnaps Gwen at the Southeast. After Ben defeats Clancy, Animo's agent, he learns Animo and Gwen are at Oil Refinery. When at Oil Refinery, it is revealed that Animo as tied Gwen up to lure Ben into a trap. Ben fights Animo and saves Gwen (thought he doesn't untie her).

Five years later, during the time of Ben 10: Alien Force, Dr. Animo is found in the Null Void (he purposely went in to find new animal species but couldn't get out) where he assumed control over the Null Void Guardians and took on the alias "D'Void". His appearance change in this series his body is more muscular. Considering his surprise when he learned that Brainstorm, (before he learned it was really Ben) knew his name, it can be assumed that he never went by it while there. He plans to open a wormhole to the real world to use the Guardians to take over the Earth, and he forces the citizens there to gather a mineral that not only powered his drill but gives him immense strength and near invulnerability. In "Voided," his plans are foiled by the joint efforts of Helen, Manny, Ben, Max (codenamed "The Wrench"), and a group of other Plumbers' kids (including a Havoc Beast and a Vulpimancer).

Animo later returns in Ben 10: Ultimate Alien, having somehow escaped from the Null Void and going by his true name again.

At the beginning of Escape From Aggregor, he used a device to take control of the Yeti in the Himalayas and create a "De-Evolution Bomb" to turn everyone in the Southern hemisphere into yetis (which Ben, Gwen, Kevin and even the Yeti thought was a stupid idea). Using Brainstorm, Ben was able to turn his mind-controlled Yeti against him, while Kevin and Gwen disabled the bomb. He's then most likely sent back either to the Null Void or a normal jail. He has also returned to his original appearance (for the most part) and voice.

Animo returns in "It's Not Easy Being Gwen" where he attempts to raise an army of his signatured mutated Frogs using the enhanced version of his telescopic transmodulator. He is eventually defeated by Gwen, Ben and Kevin.

Animo comes back again in the episode The Eggman Cometh where he has a farm which is where he uses his de-evolution ray to turn normal eggs into Dinosaur eggs that when they hatch, they have creatures similar to Dragons. However, he's defeated & all of the reatures are turned back into normal Chickens thanks to Jury Rigg and Jetray.

Animo reappears in It Was Them where he raided an army of giant ants that breathe fire as well as building a helmet that allows him control over the creatures. Ben and Rook stumble into his giant ant hill after they mistakenly believed him to be behind the attacks of Khyber's dog. Rook uses a specialized goo to blend in so that the giant ants won't attack them. Animo catches Ben and Rook and orders his army of ants to attack them, but is interrupted when Khyber's dog joins the battle as Mucilator. Ben mistakes that Khyber's dog belongs to Animo (just like how he thought that Buglizard belonged to Psyphon), but Animo insists that it isn't his. Ben defeats Mucilator by redirecting Animo's ants to attack it instead. At this point, Animo has regained his green skin color from the original series and his eyes are never seen to being covered in goggles. Also, his brain is exposed in a dome on top of his head (similar to Mojo Jojo) with two antennas that enable him, by thinking hard enough, to immense a powerful beam that controls animals.

In a flashback in Special Delivery, Dr. Animo and his mutant mosquito attack Ben. However, Way Big crushes the mosquito by swapping it with Mr. Bauuman's truck, accidentally sending the truck into outer space and knocking over Mr. Bauuman's car in the process.

In a flashback in Evil's Encore, Animo infiltrated Mt. Rushmore with the help of his Technobugs planning on using them to take over Plumbers HQ. He also sends a two-headed giraffe after the Tennysons, but the giraffe accidentally has its two smashed together and is knocked out. Ben, Gwen and Max find Dr. Animo using his Technobugs to override the controls and mutate the world, but Merk Upchuck eats the Technobugs and accidentally destroys the heads of Mt. Rushmore whilst spitting them outside. In the present-day, Animo tries using the same plan to escape prison; however, his plan was thwarted when Blukic unwittingly ate the Technobug.

Animo appears again in T.G.I.S, where he resurrects and forms an alliance with V.V. Argost. Argost grants Animo his own army of Chupacabra in exchange for an entire life supply of essence. This prompts Rook to contact the Saturdays for help. Animo raids his army of Chupacabra everywhere in Bellwood, including Mr. Bauuman's shop and Undertown. Animo and Argost confront Ben Rook and the Saturday family out on the streets. However, their alliance soon falls apart when Animo's antennas break apart freeing the Chupacabra from his control and when Feedback strips Argost off of the power that Animo gave him.

In Animo Crackers, Animo is seen in his cell in Plumbers HQ having somehow been recaptured. He vents his anger towards his stuffed animals on his numerous failures in enslaving the world (in the process, he mentions having once allied himself with Joseph Chadwick) when suddenly, a robotic Gorilla Toy appears in his cell. The toy lasers the cell door open and instructs Animo in his escape from Plumbers HQ. It even blasts the elevator Animo was in into the forest, crash-landing and destroying the toy. Animo then comes face-to-face with his future self, who had traveled back in time and transported the toy to his cell so that he can escape. Future Dr. Animo explains that he freed him from prison because he seeks a rare DNA tube called the "A.R.C Project" from the SECT team. Both Animos encounter a faceless figure calling itself "Chrono-Spanner". Ben and Rook, who followed the crash, locate both Animos and reluctantly join forces with Spanner to defeat them. While being chased, Animo uses his new antennas (which he acquired from the Gorilla Toy earlier) to mutate a large army of ferals squirrels into attacking Rook whilst the Future Animo deals with Ben and Spanner. Eventually, both Animos succeed in getting the final vial of the A.R.C Project only to end up fighting over it. When Ben gains a new transformation named Gutrot, he incapacitates the Animos with short-term memory loss gas. As Spanner makes off with the future Dr. Animo, the present one wakes up and Ben and Rook deceive him into thinking it's game night for the prisoners at Plumbers HQ.

Animo, also known as D'Void, appears in Vilgax Attacks in The Null Void. His power source consist of numeral capsules of fire. In order to harm him, you need to freeze them using Big Chill's ice breath. 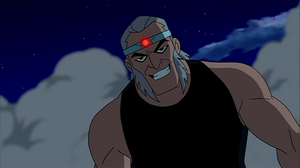 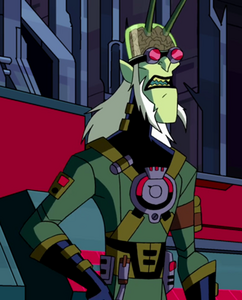 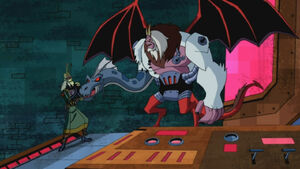 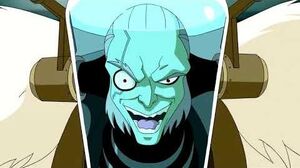 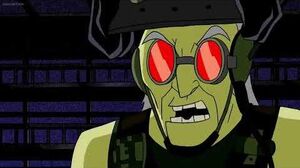 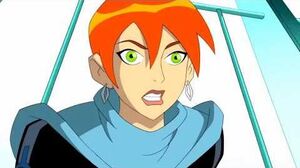 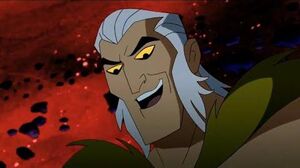 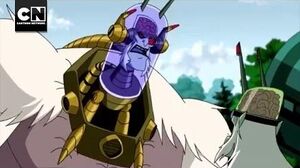