Trying to stabilize and perfect himself

Stabilize himself and become perfect

Absorb as many nanites as possible and seemingly destroy the world

Alpha is an old creation of Rex’s brother, Caesar, and the main antagonist from Ben 10-Generator Rex: Heroes United.

He was voiced by Michael Emerson, who also played Zep Hindle in Saw, Benjamin Linus in Lost, the Joker in The Dark Knight Returns and Cayden James in Arrow.

Alpha was originally created in the early days of the nanites project as a means of manufacturing nanites able to be adapted for any need. Caesar programmed it with artificial intelligence so that it could control the nanites as they did their tasks.

However, Alpha became unstable with every mechanical body it formed, quickly burning out. It tried to take over an organic body, forcing Caesar to banish it to what he thought was as an empty pocket dimension. In actuality, it was the Null Void, a dimension where galactic criminals were banished, and Alpha apparently absorbed alien life, gaining a new form. It also managed to absorb alien technology that used a dimensional equivalent to nanites, giving it the power it needed to return to Rex’s world to seek out Caesar, so as to stabilize itself.

Battle with Rex and Ben

However, as Alpha returned, it accidentally brought Ben Tennyson with it and upon arriving, it headed into New York City while Ben and Rex engaged each other. Alpha was interested by the presence of nanites in the humans and creatures all around it. Six attacked it, cutting a piece off of its mechanical body, which came into Caesar’s possession. However, Alpha’s body self-destructed, putting Six in a coma, and it later began tailing Rex and Ben.

When they met up with Caesar, Alpha showed up and attacked them, trying to get its “father” to stabilize it. Ben, Rex, and Caesar retreated to Caesar’s lab, but Alpha pursued them and attacked again, though Ben and Rex escaped.

Alpha invaded Rex’s base, trying to absorb all the E.V.O.s inside to get their nanites. When Ben and Rex showed up, Alpha went after Rex, hoping to gain his Omega nanite, which was its key to becoming perfect and stabilizing itself. However, Ben and Rex managed to drive Alpha off, forcing it to seek another source of nanites.

Alpha headed to the location of the second-largest nanite concentration, the Bug Jar, which was a whole city of E.V.O.s. Rex, Ben, and White Knight arrived to stop Alpha, but by the time that they arrived, it had already absorbed the nanites of every E.V.O. in the Bug Jar, gaining a new monstrous form. They began fighting and Alpha continued to try and absorb Rex’s Omega nanite. Eventually it hacked Ben’s Ultimatrix so as to gain more power, thanks to the inactive nanites Ben absorbed earlier. This allowed Alpha to form its own corrupt Ultimatrix and transform into mutated E.V.O. versions of Ben’s aliens. It continued to try to absorb Rex’s Omega nanite and Ben managed to briefly transform into Shocksquatch, catching Alpha off guard. Rex eventually managed to disable Alpha’s Ultimatrix, but was finally caught, allowing it to absorb the Omega nanite and transform again. Declaring itself Alpha-Omega, it rampaged through the Bug Jar, absorbing ruined buildings and forming them into new nanites. Rex doubted that he could stop the nanite monster without his Omega nanite, but Ben turned into Upgrade and merged with Rex. They were able to take on and weaken Alpha-Omega, before Caesar showed up and extracted the Omega nanite. Thus, Rex was able to compress Alpha into a small sphere of matter and Caesar opened a rift for Ben to get home. Before doing so, Ben transformed into Upchuck and swallowed the cube Alpha had been compacted into, returning him to the Null Void before heading back to his own dimension. However, Alpha began stirring, cracking its matter prison in the depths of the Null Void. Alpha never returned after this.

Alpha is heartless and cruel, constantly seeking to accomplish its own goals. It looks upon Nanites as its brethren and considers Caesar its father, despite the fact that Caesar cares nothing for it. Alpha also considers the E.V.O.s superior to humans because of their active nanites.

Alpha is made of a non-organic compound and can take over living creatures and machines, as well as drain nanites from E.V.O.s to increase its own power. It can also absorb machines to gain their abilities, such as the Ultimatrix. When Alpha did so, it formed its own Ultimatrix, allowing it to turn into even stronger E.V.O. versions of Ben’s aliens. 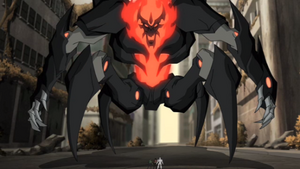 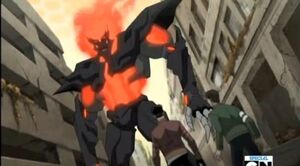 Alpha after absorbing all the Nanites in the Bug Jar 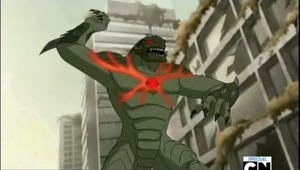 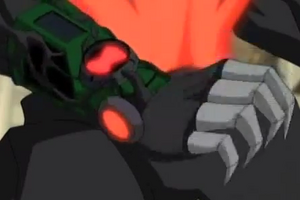 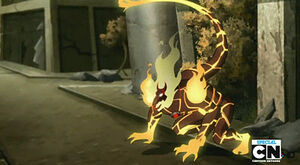 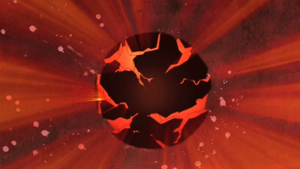 Alpha breaking free from his nanite sphere.
Add a photo to this gallery

Retrieved from "https://villains.fandom.com/wiki/Alpha_(Heroes_United)?oldid=4087836"
Community content is available under CC-BY-SA unless otherwise noted.