Men in Black: The Series

Founder of the MiB

Destroy the MIB.
Take over the world (all failed).

He was voiced by David Warner, who also portrayed Ra's al Ghul in Batman: The Animated Series, Spicer Lovejoy in Titanic, The Evil Genius in Time Bandits, The Lobe in Freakazoid, Jon Irenicus in Baldur's Gate 2, Ed Dillinger, Sark and the MCP in Tron, and Nergal in The Grim Adventures of Billy & Mandy.

Between the 1950's and 1960's, Alpha helped form the organization MiB to monitor and police extraterrestrial activity on Earth, and has recruited many other agents, including Kay, to the cause. As the first Chief of MiB, he showed the ways to Kay. However, as time passes by, Alpha became corrupt and greedy, stealing a Cosmic Integrator, which was forbidden to be used in Earth for another thousand years according to MiB policy. He tried to get Kay to go with him, but Kay refuses to reject everything he taught him. Angered, Alpha shoots Kay, leaving him for dead.

For unknown reasons, Kay has survived being left for dead by Alpha, but this trauma has changed him into becoming the grouchy and humorless man he is. When this act of treachery became public to the MiB, Alpha was ousted from the MiB for his actions, leaving Zed to take over as the new Chief.

Branded as a criminal by his own organization, Alpha then goes into exile in outer space to avoid incarceration, and he spent 20 years searching the cosmos for the best alien parts. He would then use the Cosmic Integrator to put these body parts onto himself against the aliens' will. After these 20 years, Alpha came back, with only one thing in mind: revenge against the MiB.

First appearing in "The Alpha Syndrome", Alpha returned to Earth, and stole a Sintillian Heart from an alien at a Hotel. He stayed there disguised as a MIB Agent, meets Jay (claims to be Agent A), after telling Jay several things he asked him as he noticed he was K's partner if he was still Mr. Happy, Jay commented as if A was being sarcastic. MiB soon catches on of his presence, and despite Zed's warning, Kay and Jay go to confront him. They find him with the heart, and he reveals his new form. After this there is a long fight, in which Alpha shoots the heart, and then disappears. Alpha later kidnaps the same Sintillian which he stole the heart, intending to use the other heart.

Kay finds Alpha alone, while Jay and Elle try to find them both, with the help of Jeebs. Using technology from Jeebs, Kay sees a flashback of Kay and Alpha finding the Cosmic Integrator off of some dead aliens. After watching, Jay knows that Alpha is back where he was in the flashback. Once again, Alpha is trying to get Kay to join him, again to no avail. Kay then attempts to release gas that would only kill him and Alpha, while the Sintillian, on the other hand, can breathe through it. However, he is forced to relent when Jay and Elle arrive, unwilling to sacrifice their lives. Alpha takes Jay hostage, and Elle and Kay run away. While trying to get Jay to join him, Jay melts, revealing to be a Quick Clone, leaving behind a bomb. The distraction allows Kay to rescue the Sintillian before the bomb sets off, destroying the while building. Alpha then disappears, leaving the agents wondering about him.

In "The Heads You Lose Syndrome", Alpha was weakening horribly and his's alien attachments were falling apart. Alpha then forced Jack Jeebs to locate new replacement parts for him. After his attempt to steal a Gravalax arm, Jeebs told Alpha about Troy the Symbiote and how it could help him heal him and his attachment. After Jeebs gave MiB a "anonymous call", Alpha then separated Jay and Troy from Kay. Alpha then split Troy from Jay and then made Troy join him. Alpha and his attachments were then healed and he escaped to his secret lair. Alpha was then called by Jeebs about a special alien ship. When alpha got there he inspected the ship, but found out that it was trap by Kay and Elle, who are waiting for him. Alpha then locked Kay and Elle in the ship and then glued Jeebs to the ship. Alpha then had the ship plot a crash course at Mount Rushmore. After the ship took off, Alpha then left. Alpha was confronted by Jay and Troy's mother.

Jay and Alpha fought each other. Just as Alpha was about to finish of Jay and Troy's mother, Troy started to become one with Alpha. Troy's mother then joined with Alpha, but when she did, not only was Alpha was losing control of his body, but the alien attachments are being healed and grown of new bodies. As a result of this reaction, Alpha and his alien attachments then exploded, leaving the aliens to finally regain control of their bodies. Jay then merges back with Troy and his mother to save them while the former alien attachments could catch Alpha and make him pay for what he did to them, only to find out that he has disappeared. Though Alpha lost most of his attachments, he was able to get new parts starting with a Gravalax arm.

Alpha then returned in "The Quick Clone Syndrome", where Kay and Jay found him in the sewers when Bobo the Squat found something that did not belong there. Alpha was in a alien cocoon. Alpha's appearance had become larger than before. Kay tried to neutralize Alpha, but was subdue by him. Jay then pulled out his noisy cricket, but was then revealed to be a quick clone. After it melted Alpha escaped. Alpha then returned and picked up what remained of the quick clone. In a secret lair, Alpha used one of his alien offspring and mixed it with what remained of the Jay quick clone. Alpha then sent the rogue Jay quick clone to retrieve "intelligence" from MiB. The rogue Jay quick clone returns with Zed's still alive brain in a jar.

Alpha tried to access information from Zed, but could only get his memories of Old Yeller. Alpha then took Zed to a museum to look at Artwork that contained alien secrets. Kay and Jay then arrived. While Jay battle his rogue quick clone, Kay took on Alpha. During their fight, Alpha almost dropped Zed brain jar. Fortunately, Jay was able to catch it. Alpha then cut Jay in half and tried to get Zed's brain. Jay was then revealed to be another quick clone. Alpha is then surrounded by a army of Jay quick clones. Alpha then escaped once again.

In "The Blackguard Syndrome", Alpha, working with Jeebs' brother, Dak, tried to take the MiB Blackguard Satellite. Alpha and Dak failed in this attempt and Alpha went down plummeting to earth.

In "The Cold Sweat Syndrome", Alpha merged with Dak and the two tried to raise an ancient alien ship out of the Arctic.

In "The Out to Pasture Syndrome", Alpha returned with more power, but is later beaten down by Jay, who finally destroys his ultimate body, leaving Alpha as a frail old man. Having lost his power, Alpha demands to be finished off, but the MiB refused to do so and instead have Alpha arrested and locked up in a detainment cell for life.

In "The Opening Gambit Syndrome", Alpha was asked how he stopped Vangus from destroying Earth 30 years ago. He provided Agent J of several clues regarding to the invasion that was prevented 30 years ago, but this was all part of a plan of manipulation, which lead to Alpha escaping from MiB custody and possessing cybernetic parts for his frail body, becoming a cyborg before reuniting with Vangus. It is later revealed that Alpha convinced Vangus to delay the attack on Earth for the next 30 years before he was kicked out from MiB. In the end, Vangus got caught by MiB, but Alpha escaped.

In The Endgame Syndrome (Parts 1 and 2), the series finale of the animated series, Alpha arranges for Vangus to escape from MiB custody and plots with him to take over the Earth of its oil supplies. Due to the threat of this takeover and the destruction of the United Nations building as a result, the MIB then decides to reveal themselves to the world in order for the governments and their alien allies a good chance to fight back. Alpha has now used the cosmic integrator to the max, not even resembling his human self. He now is massive, and has alien and robotic parts attached. In the final battle, Jay and Kay try to intervene by infiltrating into Vangus' mother-ship, but are captured. Vangus, frustrated with the difficulty involved in conquering Earth, elects to simply destroy it and plunder its oil resources. This leads to a fight between Alpha (who wanted to rule the world, not destroy it) and Vangus, who later sets a missile to destroy the Earth before escaping.

Jay and Kay realize that they cannot stop the missile and that Alpha is the only one who has a chance to stop it. Still wanting to rule the Earth, Alpha agrees to disarm the missile to save the Earth using his cybernetic parts, taking on the thought of what happens if the MiB are to be living under his rule. He climbs down to the missile, but as he is working on disarming it, it launches towards Earth with Alpha still on it. Realizing that it's too late, Alpha accepts the fate that he and the Earth will ponder, stating that at least no one else will try to rule it. Fortunately, Jay and Kay shoot the missile just above the atmosphere, which causes it to detonate, finally destroying Alpha for good and saving the Earth. 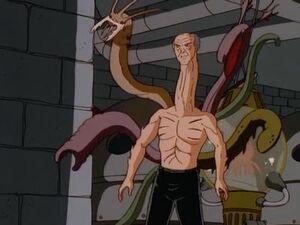 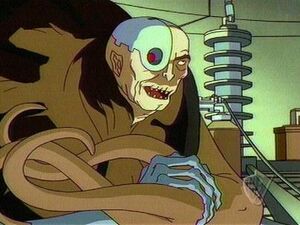