Find Kevin and take her to his master (formerly).

Alpha is the secondary antagonist of Pixar's 10th full-length animated feature film Up, and the main antagonist of the short called Dug's Special Mission.

He was voiced by Bob Peterson, who also played Chick Hicks in Cars 3.

Alpha is a Doberman Pinscher owned by Charles F. Muntz. He is the leader of the dog pack and is usually found with Beta and Gamma, his lieutenants. Like Dug, he has a collar that allows him to talk, but a minor malfunction makes him sound as if he'd been inhaling helium, giving him a squeaky voice. The real voice for Alpha's translator chip (after Muntz fixes his collar) is a deep, intimidating voice. Russell says he likes the high-pitched voice better than the intimidating one.

In the background, he can be seen panting with happiness once Charles says "treat" to Carl and Russell.

Alpha has a very condescending, egotistical, and proud disposition, and looks down on all the other dogs in the pack. When Dug fails to bring Kevin (the bird) to Alpha, he puts Dug in the "Cone of Shame." In the climax of the film, Alpha clashes with Dug inside the airship until Dug finally defeats Alpha by trapping him under the helm and sticking a conical airship instrument housing over the Doberman's head as the "Cone of Shame". Alpha breaks his collar, making his voice high-pitched again, which causes the other dogs to ridicule him and bestow the "Alpha" title upon Dug. Following his defeat, he is seen at Russell's promotion ceremony in the film's closing scenes, still wearing the "Cone of Shame". The ending credits suggest he becomes a pet of one of the residents at the Shady Oaks Retirement Home.

Alpha, Beta and Gamma are chasing Kevin when Dug accidentally trips them, causing them to lose the bird. Alpha tells Dug to "watch the bird's favorite rock and tell them if it moves." Dug accidentally knocks the large rock over, almost squashing Alpha and the rest of the pack. Alpha then tells him to sit in the bird's 'favorite hole' and, while giving a speech to his packmates, gets buried by Dug, who sank through the hole (which was filled with quicksand). Alpha is shown getting beat up several more times until he calls "master" to tell him that Dug caused them to lose the bird, and that he is a bad dog. 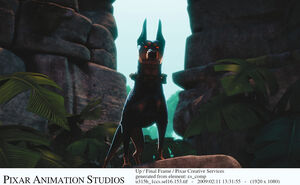 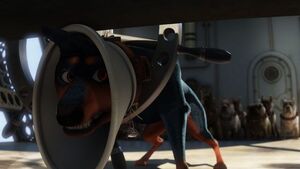 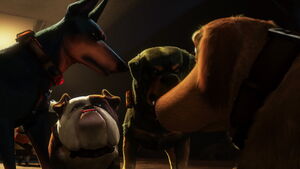 "He has lost the bird. Put him in the Cone of Shame" 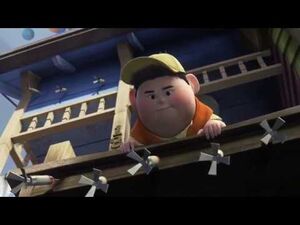 Pixar's Up - Seizing the Spirit of Adventure