The Alpha Hug Wolf looks like a werewolf, but with heart-shaped hands, feet and purple fur. In the Alpha Hug Wolf's humanoid form, she has lavender skin and dark purple hair. She seems to wear lipstick. Unlike most characters, she has big, bright green eyes, maybe caused by the Tree Monster's poison. She wears a tattered brown dress. 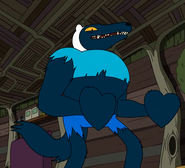 Finn as a hug wolf.

The Alpha Hug Wolf attacking Finn.
Add a photo to this gallery

Retrieved from "https://villains.fandom.com/wiki/Alpha_Hug_Wolf?oldid=3458549"
Community content is available under CC-BY-SA unless otherwise noted.