Can merge together to become a single giant monster
Superhuman strength, speed, resilience, senses and durability
One brother is able to feel whenever the other is in pain

Join Scott McCall and kill Oni and Nogitsune. (Both succeeded)

The Alpha Twins, Ethan and Aiden, are supporting antagonists in Season 3A of MTV's Teen Wolf. These characters are identical twins and alpha werewolves that has the ability to merge together and transform into a giant monster. The mechanism for this transformation the brothers displays has yet to be explained.

The Alpha Twins were members of the Alpha Pack. Ethan says they were the Omegas within a pack of brutal werewolves when Deucalion helped them develop their ability to merge together into a larger form. Once they'd mastered the ability, they killed the rest of their pack and joined the Alpha Pack.

The twins attempt to capture Isaac Lahey and a mysterious girl. On foot they are able to chase down and almost catch the motorcycle on which Isaac and the girl try to escape with. After the bike wrecks, they merge into one giant alpha and begin to charge Isaac and the girl. An electrical bolt fired from a "modified tazer" causes them to split back into two separate individuals. Later, they appear at Beacon Hills High School and attack the mysterious girl again, along with the rest of their pack.

Ethan and Aiden are seen in friendly conversations with Lydia and Danny in the school library.

Ethan and Aiden attack Isaac, then frame him for attacking them. After Scott and Isaac mess with their motorcycles, the twins merge into one to take on both boys. They only stop when Deucalion shows up. He punishes them by slicing both of them across the cheek.

Ethan sits with Danny on a road trip with the Cross Country team after the big battle between The Alpha Pack and Scott and Derek's Pack. Aiden is shown in flashback making out with Lydia. He later helps Kali get treatment for Ennis from Dr. Deaton. He comforts her after Ennis dies.

Ethan rooms with Danny during the team trip. The pair make out until Ethan begins to hallucinate and leaves to try to kill himself. Stiles stops him. In the morning, he tells Scott that Derek is still alive. He blames him for the death of Ennis and says either he must join their pack, or be hunted down by Kali.

Ethan brings Danny to the hospital for shortness of breath and chest pains. Ethan admits that he and his brother went after Lydia and Danny because they knew one of the two would be important to Scott. Aiden and Lydia make out. Both Twins hold Jennifer Blake captive during the attack on Derek's loft.

Aiden confronts Ethan and tells him to stop talking to Danny. Later, he is seen making out with Lydia until she confronts him about killing Boyd. Ethan reveals the Twins' backstory to Scott and Stiles: they were the Omegas of a pack, always the last to eat and the first to be abused, until Deucalion found them. He showed them how to control their power of merging together, allowing them to eliminate their whole pack and becoming Alphas by killing their own. Aiden is seen fighting Cora until Ethan and Scott stop the fight. Aiden and Ethan are both seen at the concert.

The twins scour the hospital in search of Jennifer Blake. They get into multiple physical encounters with Scott, Derek, Peter, and the Argents.

The twins hunt down Ms. Morrell along with Kali and Deucalion.

Ethan goes to the animal clinic wanting Lydia to help him stop Aiden and Kali from killing Derek. The merged twins attack Jennifer and she breaks their necks. They survive thanks to Deaton.

They fought with Scott until the very end when a chaotic demon known as a Nogitsune wrecked havoc in Beacon Hills and killed Aiden with the aid of the Oni. He died in the arms of Derek and Ethan, who leaves the town afterwards, but not before breaking up with Danny, who reveals to have known he was a werewolf all along because "...it's Beacon Hills". 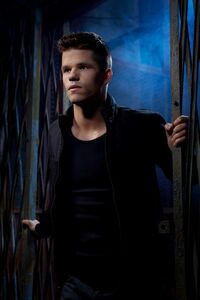 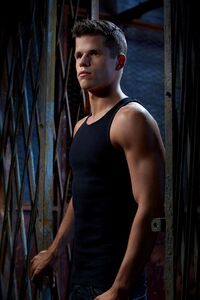 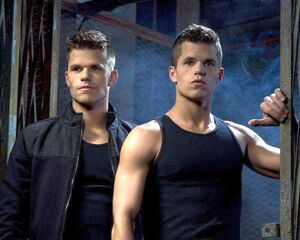 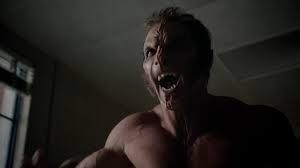 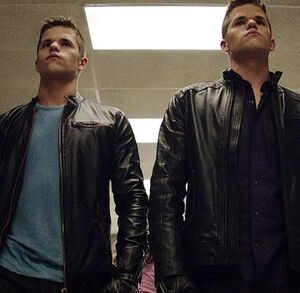 Ethan and his twin Aiden 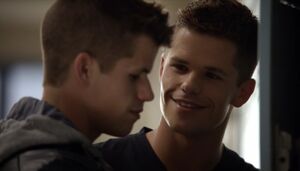 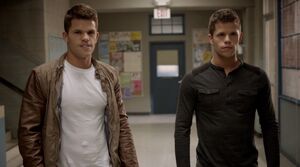 Ethan and his twin are facing Scott
Add a photo to this gallery
Retrieved from "https://villains.fandom.com/wiki/Alpha_Twins?oldid=4028667"
Community content is available under CC-BY-SA unless otherwise noted.