Make everyone in the world smile continuously.

Alternate Reality Mr. Turner is an alternate reality incarnation of Timmy's Dad. Although he is constantly smiling, he only does it to escape the harsh reality of his life and is quite worse than the original Mr. Turner.

He was voiced by Daran Norris, who also voiced his mainstream counterpart.

This tyrannical version of Mr. Turner was born through a seemingly insignificant wish by Timmy. The plot begins when Timmy Turner wishes for heat vision in order to breeze through his chores, but winds up melting his father's prized trophy. This results in him getting sent to his room by his angry father for melting his prized trophy.

Instead of simply wishing to go back in time to prevent himself from melting the trophy after Wanda suggests that he should apologize to his father, he decides to go all the way back to the 1970s to keep him from winning the trophy in the first place. Thus, Cosmo and Wanda wish up a Time Scooter for him that allows him to travel through time. In the 1970s, Cosmo and Wanda were a young Bill Gates' godparents, and Timmy's Dad was training both to win the trophy and the young Mrs. Turner's love.

To ensure his father loses the race, Timmy embarks his young father on a regimen designed to leave him a wreck before the race, such as feeding him a constant supply of junk food and telling scary stories to him to keep him up all night. His efforts succeed, as Mr. Turner does not win the trophy. However, Timmy then sees that the last place reward for this race (i.e. for his dad) was a scholarship to the Lil' Tyrant Dictator School. However, at this point, Timmy returns to the present day.

Upon returning to the present, Timmy sees that Dimmsdale has been turned into a totalitarian dystopia, where everyone is constantly smiling. Cosmo and Wanda are also no longer his godparents, since he no longer exists in this alternate reality meaning that Mr. Turner has never met his wife and never had a son. He meets Chester and AJ, who do not recognize him, and try to capture him. He manages to escape, and makes his way to Mr. Turner's mansion.

Upon arriving there, Mr. Turner shows Timmy around, showing pictures of him graduating dictator college, then taking over the world "with smiles", then shows a pedestal where he would put a trophy, before breaking his overly happy persona for a quick breakdown due not having one before resuming his normal happy persona.

When Timmy asks why he forces everyone to smile all the time, he says it to make sure that everyone is constantly happy as a way of not facing the reality of his life. When he revolts against this by saying that everyone cannot be happy all the time, "Dad" orders him captured by Chester, AJ and two bulky guards. However, the 70s versions of Cosmo and Wanda, who traveled with Timmy to this alternate present, distract the captors by poofing up a lava lamp, leaving them entranced so that Timmy can escape. He uses his Time Scooter to once again return to the 1970s before Alternate Mr. Turner's henchmen could capture Timmy to prevent him from change the present and erase them from existence.

Knowing that he has to make up for his error to avoid his father's tyrannical future from coming to existence, Timmy tries to make sure his father can win the race. However, he decides to do this by posing as his dad and running the race for him. immediately after the race starts, Timmy realizes that he is incredibly unathletic, but remembers he still has heat vision. He uses this to melt the bottoms of all the other runner's shoes, stopping them and ensuring he wins the race. His mother declares his love for "Mr. Turner", where Timmy tells her where to meet his actual dad, thus ensuring history is changed to normal and erasing Alternate Mr. Turner's tyrannical future from existence.

Returning to the restored present, Timmy apologizes for melting his dad's trophy. His father accepts, giving Timmy the melted remains of the trophy. However, due to an offhand suggestion by present-day Cosmo, Bill Gates called the Internet the "Timmy", and as such, Timmy's name in this reality is "Internet". This plot point is presumably wished out by Cosmo and Wanda or simply forgotten by the next episode in the show's typical "reset" button. 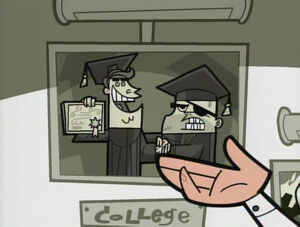 "This is me graduating dictator college". 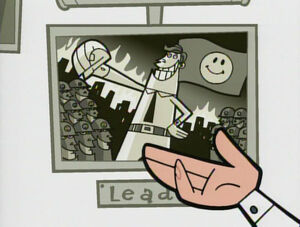 "And this is me taking over the world - with smiles!" 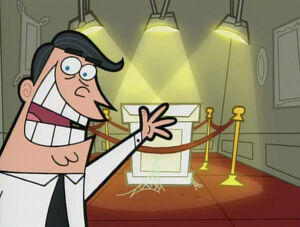 "And this is where I'd keep my trophy" 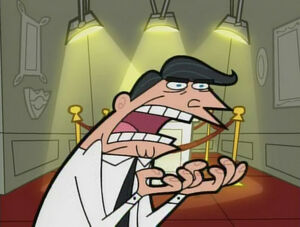 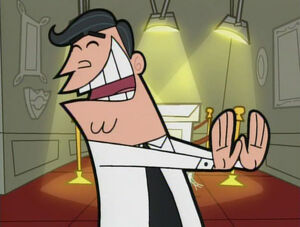 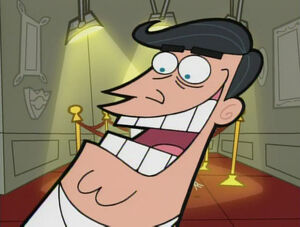