Nemesis in the Moon

Complete control over the One-Eyes

Alus is the main antagonist of the anime Gundam Build Diver Re:RISE.

As an AI, Alus had a very limited emotions, and is extremely dedicated into protecting Eldora, and will be willing to eliminate anyone he deemed as intruders. As he keep getting defeated by the BUILD DiVERS, Alus can be seen to get increasingly frustrated. Deep down, Alus wished to be able to reunite with the ancient Eldorans.

Alus is an AI created by the Ancients, a civilization living on the planet Eldora to protect the planet from foreign threat. However, he was eventually damaged and fell in a deep sleep, while the ancient Eldorans promised that they will meet him again. When Alus awoke, Eldora was inhabited by Mountain-Dwellers, which Alus saw as foreign enemy and began sending the One-Eyes to attack and kill the Mountain-Dwellers, attempting to wipe them out. The sacred beast Cuadorn tried to reason with Alus, only to get wounded by him. Eventually, Alus gained the access to the GBN, where he copied the data of the gunplas to build his own army on Eldora to kill Mountain-dwellers more effectively. At some point, the GBN player, Masaki Shido, entered Eldora, which he think is Story Mission Mode and start protecting the Mountain-dwellers. However, Alus eventually controlled Shido and force him to become his underlings.

When BUILD DiVERS entered GBN and went to the base of the One-Eyes, they are greeted by Alus, who told them that he is protecting Eldora When Kazami accidentally leaked that the position of Resistance, a group fighting against One-eyes is Seguri, Alus started to charge a superweapon called Lightning from the Moon to the city, while the BUILD DiVERS tried to destroy it and Hiroto even damaged Shido's Gundam Setlsam, they still failed to stop the satellite cannon, it fired and destroyed Seguri, killing everyone on it. The BUILD DiVERS then was forced to logout in defeat.

Soon, it was revealed that when Hiroto damaged the Gundam Setlsam, and Shido started to be freed from Alus's control. As Shidi started to fight the One-Eyes and even protect some Eldorans. Alus sent a force of Mobile Suits, including the revived Alus Earthree Gundam, Dubious Arche Gundam, and Fake V Gundam to fight against Shido. The BUILD DiVERS intervened in order to completely save Shido from Alus, and with Cuadorn's help, the BUILD DiVERS freed Shido, As for Alus, since Cuadorn destroyed the Fake V Gundam's Fin Funnels, he was forced to retreat.

Eventually, the BUILD DiVERS decided to destroy the Lightning from the Moon after having some training and testing in GBN. Alus send his massive armies together with the Dubious Arche Gundam, Fake V Gundam, and the newly developed Reverse Turn X. While Alus had overwhelming force, his strategy on using powerful attacks on attacking was exploited by BUILD DiVERS, thus they destroyed the three Gundams and had Freddy to thank Alus for protecting them. The BUILD DiVERS also combined their mechs to become BUILD DiVERS Re:Rising Gundam, and its Grand Cannon overpowered the satellite cannon, destroying the base. Alus then finally realized that the Mountain-Dwellers are the new Eldorans, but concluded that the GBN players were the intruders, so he went to GBN, only to get surrounded by GBN players since Kazami was doing a live boardcast. The final battle against Alus then started in GBN.

Alus, even though he was completely surrounded by GBN players, was still able to overwhelm them with his overwhelming firepower and even damaged the GBN server. However, the GBN admin came and fixed the damaged servers, while the players were started to be able to destroy Alus' fleet, causing his ships to sink one by one. In the end, he was left with the Alus Earthree Gundam and a ship. After getting damaged by Kyoya, Alus combined his Gundam with his sunken ship. However, Hiroto and Riku arrived and fired together, destroying Alus. In his final moments, he was finally able to reunite with the ancient Eldorans. Later, his data reborn as a new EL-Diver.

Alus taking the form of Hiroto.

Alus taking the form of Kazami. 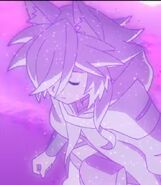 Alus taking the form of Parviz.

Alus taking the form of May.

Alus ordering the Lightning from the Moon to be fired.

Alus watching the Grand Cannon firing towards him.

Alus consumed by the explosion.

Alus going to the GBN.

Alus's final moments before his death. 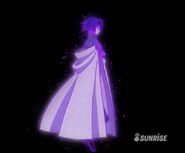 Alus during the time of the Ancients.
Community content is available under CC-BY-SA unless otherwise noted.
Advertisement