Pokémon: Volcanion and the Mechanical Marvel

Councilor of the Azoth Kingdom

Plotting his rise to power.

Take over the Azoth Kingdom.

Install Magearna's soul-heart into the Kingdom's castle.
Kill Ash, Clemont, Bonnie, Serena, and anyone else who stand against him (all failed).

Alva (also known as Jarvis in the Japanese version) is the main antagonist of the nineteenth Pokémon film Pokémon: Volcanion and the Mechanical Marvel. He is the corrupt councellor of the Azoth Kingdom who wishes to rule said kingdom.

He was voiced by Kōichi Yamadera in Japanese and in English, he was voiced by Sean Schemmel in the trailer for Pokémon: Volcanion and the Mechanical Marvel and Billy Bob Thompson in the actual film.

Jarvis is the corrupt councillor of the Azoth Kingdom, who plans to take over the Kingdom. He is highly knowledgeable in the Kingdom's history and Mystery Science, and even made his own type of Mystery Science called "Neo Mystery Science", to create the technique known as "Mega Wave", which forces many Pokémon to painfully Mega-evolve at once and follow his order, bypassing the "bond" phase.

He spent years educating the young prince of the kingdom, Raleigh, to gain his loyalty. Also, he has two henchmen, Levi and Cherie, to do his bidding. The only person who does not trust him is the prince's sister, Kimia.

He first appeared when Magearna was delivered to him by his henchmen after an attack by Volcanion. He waits until Volcanion appears with Ash. Alva then uses his Mega Wave technique to Mega Evolve Alakazam, Glalie, and his shiny Gengar. He ordered them to attack, but Volcanion and Ash were able to escape with Magearna.

When Team Rocket were caught sneaking into the castle, they met Alva in his office. Once he learned that they knew Ash, he recruited them and gave them Mega Wave Bracelets, and a Heracross and a Pinsir. He then tracks Ash and co. location and sends Team Rocket after them.

However, when Team Rocket failed their mission, Alva leads an attack on Nebel Plateau, which is the home of Volcanion and Magearna. He then traps many of the resident Pokémon, including Volcanion (and Ash) in electrical machines, and tortures them to force Magearna to surrender, which it eventually does.

As soon as Magearna boarded his airship, it is paralyzed by his Gengar. he then opens the hatch on its chest and reveals the Soul-Heart. When Raleigh realizes Alva's plans, he attempted to stop Alva, but failed, and is forced to watch as Alva removes the Soul-Heart out of Magearna, "killing" it in the process. Alva discards Magearna's body and had his Pokémon use Hyper Beam on the People and their Pokémon, before putting Raleigh to sleep via Gengar's Hypnosis.

Once he returns to the Azoth Kingdom's castle, Alva installed the Soul-heart into the machine located at the heart of the castle. This transforms the castle into a flying fortress, which was made by Magearna's creator, Nikola, to protect the kingdom. However, Alva discovered that the people he thought he had killed during his attack on Nebel Plateau survived and are approaching the Fortress.

Alva charges the fortress's laser cannons, but they do not fire, causing him to realize that Magearna is fighting his control. Panicking, he had his henchmen go out to fight the attackers while Alva himself hid in the control room. When Ash, his Greninja, Volcanion, Kimia, and her Gardevoir arrives, Alva traps them in the electrical machines that he used before.

He then forced Magearna to use the laser to destroy Nebel Plateau by using Gengar's Mean Look to weaken Magearna's resistance. This action cause Magearna's soul to fade from the Soul-Heart, reducing Meowth to tears. A satisfied Alva attempts to finish off the Plateau with another laser fire, but it is blocked by the combined efforts of Squishy, in its Complete Form, and the residing Pokémon.

Volcanion eventually manages to free itself and others from the electrical machine. Alva ordered Gengar to attack with Shadow Ball, which is countered by Pikachu's Electro Ball. The blowback from Electro Ball caused Alva to drop his staff, which Ash jams into machinery, destroying the Mega Wave jewel, and causing all the Mega Wave Pokémon to revert into their original form and escape the fortress.

In one last attempt to kill his enemies, Alva locks the fortress on a collision course with the Nebel Plateau and then attempts to escape on his jetpack. However, Greninja, who transformed into Ash-Greninja, manages to disable the jetpack, which causes him to fly out of control and crash in the forest below.

He is later revealed to have survived the fall and found by Kimia, who arrests him using the same Magnetic Bands that were used earlier on Ash and Volcanion. He attempted to escape, only to be pulled back into the aircraft by the Magnetic Bands, much to his dismay. 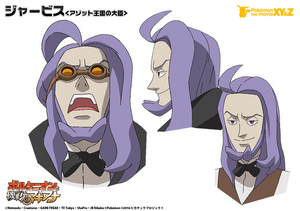 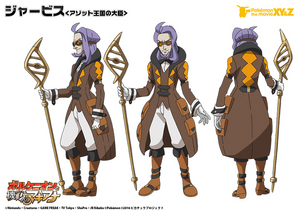 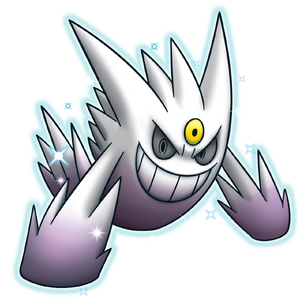