Drinking alcohol and watching sports on TV.
Keeping his daughter in control and being extremely strict and authoritative to her (novel and 1990 TV Miniseries).

Keep Beverly Marsh away from the Losers Club or anyone else (failed).

Alvin Marsh is a supporting antagonist in Stephen King's It. He is the widowed spouse of the late Elfrida Marsh (though, in the original novel, Elfrida is alive, at least in the segments taking place when the Loser's Club were kids) and the abusive father of Beverly Marsh. He is also a form that Pennywise/IT uses to frighten Beverly since she has a problem with him. It is also implied (and confirmed in the 2017 film) that he sexually abuses his own daughter.

He was portrayed by Frank C. Turner in the miniseries, and Stephen Bogaert in the 2017 film.

Like Henry Bowers' father Butch and Eddie Corcoran's stepfather Richard Macklin, Al is an abusive parent. While beating Beverly, he constantly tends to say “Sometimes, I worry about you, Bevvie, sometimes I worry a lot.”.

While he often abused Beverly in the worst ways imaginable, however, Al could also be truly kind, loving, and empathetic to Beverly. However, even his kindness has a darker side; as it is implied that he has incestuous feelings for her. Elfrida however made sure to ask Beverly if Alvin ever touched her inappropriately, Beverly reacted with confusion, proving that he hadn’t raped her.

In the 2017 film, Alvin is portrayed as sexually abusive towards Beverly (unlike in the novel and miniseries where it is just implied) making him even worse of a father, it is shown that he has a creepy and disturbing attraction towards his daughter and appears to manipulate her into thinking that she can trust nobody but him. This highly ramps up his villainy through his sick actions, and sheds any redeeming quality he originally had of him actually caring for his daughter.

While Alvin Marsh is sitting in his chair drinking alcohol and watching television, Beverly was tidying up in the bathroom when IT's presence in the voices of lost children begin to taunt Beverly from the drain in the sink.

Then the children's voices morph into IT's voice and a big red balloon rises from the drain in the sink and explodes, flooding the sink and covering Beverly in blood. As would be expected, Beverly begins screaming and attracts the attention of her father. He comes in, believing that a peeping Tom was looking in on his precious daughter, and ends up hitting her across the face. (He worries about her, he worries a lot.)

She realizes that he cannot see the blood that covers the bathroom and decides to tell him instead of the blood that she saw a big spider. He leaves after checking out the drain, much to the horror of Beverly as he covers his own hands in the mysterious blood.

The blood does not disappear, and she shows it to her friends a day or so later. The Losers' Club helps clean it up when her father is gone one day.

27 years later, an adult Beverly Marsh arrives in town and goes to her old home. She sees her father's name on the doorbell, but when she rings it, an old woman comes out. She introduces herself as Mrs. Kersh, who tells Beverly that Alvin has been dead for 5 years. Beverly checks the doorbell and realizes that she apparently mistaken and that the name is Kersh. She apologizes and Mrs. Kersh invites her in for tea. Beverly accepts and discovers that the place has been entirely redecorated.

She freshens up in the bathroom and hastily plugs the drain. She runs a bit of water and then hesitates, and when Mrs. Kersh calls out to her, asking her what is taking her so long. Beverly realizes that the sink is now halfway full of water from the leaky faucet. She goes to have tea with Mrs. Kersh, who nastily slurps down her tea. Beverly realizes that the woman's teeth are rotting, and discovers that her tea has transformed into feces (blood in the 1990 TV miniseries). She drops the cup and realizes that it did say "Marsh" on the doorbell.

Pennywise then adopts the voice of her father, another great fear of hers since childhood, who says that he wishes that Beverly would be wise to leave while she can. Alvin tells Beverly that he always worried about her, he always worried a lot, causing Beverly to become frightened of him. Alvin chases after Beverly, trapping her into a corner near the locked door and admitted that he loved beating her up, he beaten her because he secretly wanted to rape her. He also told her that nobody who died in Derry really died. Alvin chases Beverly to the door, attempting to grab her as Beverly screams "You're not real! You're not even alive!", then Beverly manages to escape into the streets.

Just like the book, Alvin does not seem sexually attracted to his daughter. Although he still abuses her, it seems he is very overprotective of his daughter, Beverly. Unlike the novel or the 2017 remake, Beverly seems to trust her father a little bit, since she does call for his help whenever she needs him.

Alvin is one of It's manifestations in the mini series, like the novel, he had say that he's worried about her and It would taunt Beverly with It's form of Alvin.

Unlike the novel or miniseries, Alvin is sexually abusive towards his daughter, Beverly. After she came home from the pharmacy, her father shows up in front of her and passionately sniffs her hair. This cause Beverly to have an emotional breakdown and cuts off her ponytail. Later, he found Ben's poem in her underwear drawer and gets mad at her. He asks Bev if she is still his little girl, but she finally denies him.

Alvin snaps and attempts to rape his daughter, but Bev fights back, runs into the bathroom and hides in the shower. Alvin kicks the door open and looks for her. Moments later, Beverly bashes him in the face with a toilet seat, knocking him out him. Later, Bill Denborough finds a groaning yet still knocked out Alvin in his apartment, with his blood used to write a message on the bathroom wall saying "You die if you try". 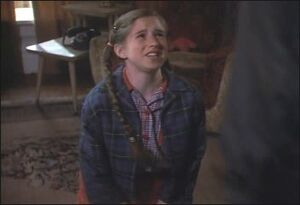 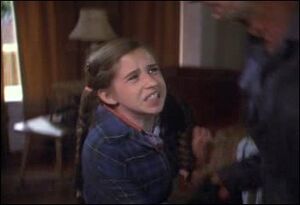 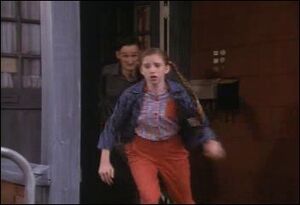 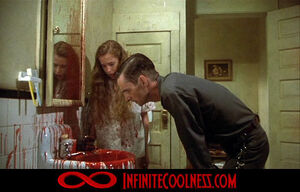 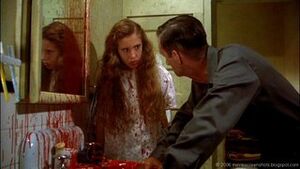 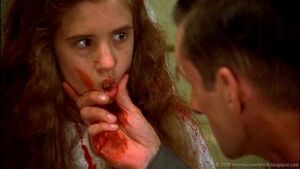 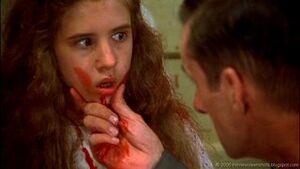 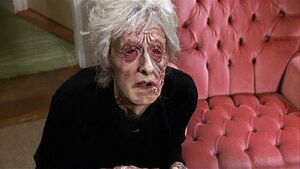 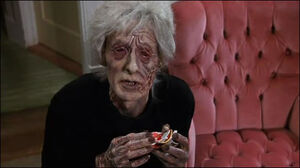 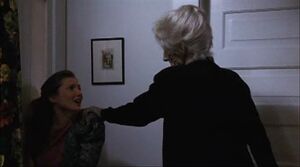 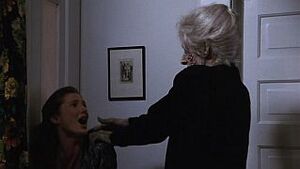 Retrieved from "https://villains.fandom.com/wiki/Alvin_Marsh?oldid=4024649"
Community content is available under CC-BY-SA unless otherwise noted.