Alvin and the Chipmunks (Disaster Movie)

Kill Will, Juney, Calvin, and the Princess to prevent them from rescuing Amy from the museum (succeeded in killing Juney, but failed in killing the others).

Alvin and the Chipmunks are an evil trio of singing rodents & a parody of the anthropomorphic characters of the same name. They are supporting antagonists in the infamous 2008 parody movie Disaster Movie.

"Alvin" and the "Chipmunks" first appeared inside the shelter Will, Calvin, Juney & Giselle are staying. They are first shown singing We Wish You A Merry Christmas, wherein Giselle applause is adobed by them while Juney distrust them. The "Chipmunks" later sang Chipmunk Boogie (a loose parody of Funkytown by Lipps Inc), in which Will, Calvin, Giselle joins them by dancing. Will & Calvin find them cute & harmless but after they said that, the "Chipmunks" show their true nature by singing a dark rock song "Chipmunk Metal", surprising the main characters. Juney says that they are not Alvin & the Chipmunks & Will says "Alvin" has rabies, which the latter shows. The main characters back out as "Alvin" ask them where do they think they are going & then attacks Will (who shouts Dave's line "ALVIN!!!!!!!") on his crotch leaving Calvin, Juney & Giselle to run away from him, as "Theodore" attacks Calvin.

Juney then tries to help him by hit "Theodore" with a baseball bat but instead hits Calvin. Will fights "Alvin" who wants to eat his scrotum, which he considered as "nuts". While they are fighting the "Chipmunks", Giselle complains that no one is fighting her. Later, "Simon" attacks Juney on the back but Juney fights back & throws him and then runs away. "Alvin", who was busy fight Will, saw her & then attacks her, alongside with his brothers "Simon" & "Theodore", who was just thrown by Calvin. The "Chipmunks" got her & start devouring her while Will, Calvin & Giselle helplessly watch her get eaten. Her last words were, "Vlog you later." After they finish eating her, "Alvin" states that she was just an appetizer & they decided to eat the main course, Will. The Chipmunks tried to attack them but Will traps them inside a trash can & then shuts the lid to suffocate the "Chipmunks", thus killing them. One of the "Chipmunks'" (persumably "Alvin's") last word was, "Shithead!" 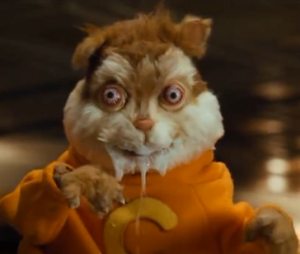 Alvin showing he had rabies 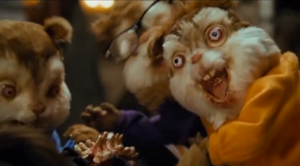 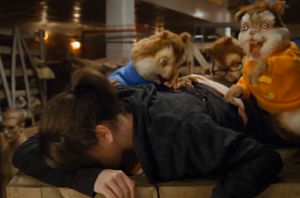 Alvin and the Chipmunks devouring Juney. 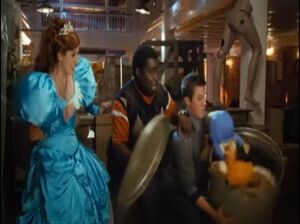 Alvin and the Chipmunks Death. 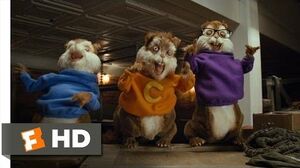 Disaster Movie (6 10) Movie CLIP - Demonic Chipmunks (2008) HD
Note: This video is not available in some parts of Europe. 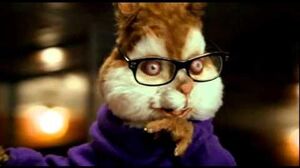