NOTE: For the book version of this character, click here.

Leader of the Outcasts

He was voiced by Mark Hamill, who also played Kavaxas in Tales of the Teenage Mutant Ninja Turtles, Colonel Muska in Castle in the Sky, and the Joker in Batman: The Animated Series and another incarnation in the Batman: Arkham videogames, the Skeleton King in Super Robot Monkey Team Hyper Force Go!, Maximus in the Fantastic Four animated series, the Hobgoblin in Spider-Man: The Animated Series, Stickybeard in Codename: Kids Next Door, Flint in Disney's Buzz Lightyear of Star Command, Niju in Balto II: Wolf Quest by Universal Pictures, Solomon Grundy in the DC Animated Universe, Fire Lord Ozai in Avatar: The Last Airbender, Trickster in The Flash, Dictatious Maximus Galadrigal in Trollhunters, ShiverJack in Disney's Jake and the Never Land Pirates, Undergrowth in the Danny Phantom series, Agent Goodman in Disney's Recess: School's Out, and Popsicles in the 2016 reiteration of The Powerpuff Girls.

Alvin was said to have been banished from Berk many years ago and now lives on a savage island of other Outcasts. Along with others, he will do anything in their power to get revenge on Berk. Now that he has heard that Berk has changed because of Hiccup, he then sets out to get him. He serves as an antagonist to Hiccup in the series, wanting to capture him so that the outcasts can learn to ride dragons.

After arriving on Berk, the Outcasts hold the population hostage, demanding that they be told who the "Dragon Conqueror" is. Snotlout and Astrid try to fight back, but to no avail. When Hiccup reveals himself as the Dragon Conqueror, Alvin in incredulous, but is convinced to take Hiccup to Dragon Island. Once there, Hiccup tricks Alvin into thinking he is fighting Toothless when he is actually putting on his saddle. Hiccup and Toothless then attack the Outcasts, backed up by the arrival of the other teens on their dragons and the adult Vikings on a ship of their own. During the conflict, Alvin faces Stoick, attacking him with an anchor on a rope. When the anchor is stuck in the ship's figurehead, Stoick ties Alvin's hands together with the rope. The figurehead falls into the sea, taking Alvin with it. The Outcasts' boat is then incinerated by the dragons. Having escaped to dry land, Alvin acknowledges that Hiccup and his friends ride dragons, and that the Outcasts will, too.

In Heather Report Part I and Part II, Alvin holds Heather's parents hostage and blackmails her into helping him by acting as a spy. He sends her to Berk to learn the secret of controlling dragons. Heather was found unconscious by the teenagers and she makes up a story and tells the others that her ship were taken over by pirates. Hiccup graciously invites her to stay with them until it is safe for her to return home. She easily gains the trust of the boys, but Astrid catches her performing suspicious activities and eventually learns that she is a spy for the Outcasts. Heather soon learns about the Book of Dragons which has almost everything they know about them. After Heather manages to steal the Book of Dragons and Stormfly and flies back to Outcast Island, the boys realize that Astrid was telling the truth all along. Astrid manages to recover Stormfly and capture Heather, but a flaming catapult stone prevents Hiccup from recovering the book: Alvin now has the Book of Dragons.

In Part II, Heather reveals that Alvin blackmailed her into helping him, but the gang doesn't buy it. They plan to disguise Astrid as Heather so she can recover the book while the others arrive at a desolate spot for extraction. Meanwhile, the Book of Dragons is blocked by a wild Gronckle and the Outcasts eventually take the book from it. "Heather" returns to Outcast Island and convinces the Outcasts that the "book will only get them far" when one of them fails to tame a Deadly Nadder. Alvin then pits "Heather" against a Monstrous Nightmare and succeeds in taming it, but when she tries to make her getaway, Alvin reveals to indeed have the real Heather's parents. The two make an exchange for Heather's parents and the Monstrous Nightmare's fire blast, but the getaway fails again and Astrid is discovered. Astrid is forced to take the Outcasts to Hiccup and the gang where Alvin attempts to persuade him into joining the Outcasts, but Hiccup bluntly refuses. The gang and their dragons don't do so hot until the real Heather and Stormfly show up and defeat the Outcasts. In a last ditch effort, Alvin flings Savage via catapult and knocks Astrid out of the sky and attempts to drop her off the cliff, but is saved by the Monstrous Nightmare and the Book of Dragons is recovered. Alvin notes the bond between the Monstrous Nightmare and Astrid, and decides that they need more than the book: they need the boy.

Alvin appears again in "We Are Family Part 1. After Hiccup and Toothless arrives on the island where Toothless's family supposedly resides, Alvin & the Outcasts ambush them, taking them prisoner, but only wanting Hiccup so Alvin can train his own dragon and claim Berk for himself. Toward the end of the episode, the plan was set up by Mildew, revealing himself as a traitor to Berk. Alvin and his men then sail to Outcast Island.

In "We Are Family Part 2", Alvin takes Hiccup and Toothless hostage back on Outcast Island. As they walk by cages containing a Whispering Death, a Scauldron, and a Changewing, Hiccup observes the Outcasts poorly handling the dragons and suggests some changes to their prison. Alvin takes the suggestions by putting cast iron on the floor of the Whispering Death's cage so it can't burrow and giving the Scauldron less to drink so it can't spit boiling water at a long range. Alvin also double-crosses Mildew and takes Fungus away. After Hiccup and Toothless escape with Mildew falling behind and getting captured again, Mildew reveals that his "arrest" was part of Alvin's plan in forming a temporary truce between Mildew and Hiccup so he could learn his secrets in taming dragons. Alvin then puts this to use and tames the captive Whispering Death, finally achieving his goal.

Alvin appeared near the end of "Live and Let Fly". He and the Outcasts appeared they were attaching Berk, but was really a diversion while Savage and Mildew placed Whispering Death eggs under the island.

In "Worst in Show", He, Savage, and Mildew returned to Berk to check on the Whispering Deaths, only to discover they were gone. He was about to kill Mildew, since it was his plan to plant the eggs, until he told him he could use the tunnels to get to the dragon academy. After checking several paths, they made it academy, where the teens were working with the Terrible Terrors. When Meatlug found the Outcasts, Alvin captured her and used her as a hostage. The riders used the Terrors to save her, and Hiccup and Toothless destroy the ship.

Alvin appeared at the end of "View to a Skrill Part I", capturing the Skrill. In the next episode, it is revealed that he is working with Dagur the Deranged to plot an invasion attack on Berk. Both chiefs were planning on betraying the other and keeping the Skrill for themselves. Alvin confronted Dagur for taking the dragon, and after fighting each other, Dagur used the Skrill to attack Alvin when he jumped into the water. Dagur had the Skrill fire into the water, electrocuting him. It is unknown if Alvin survived, as he is not seen for the rest of the episode.

Alvin returns in "Cast Out Part I" after saving Snotlout from the Screaming Death. When he arrives on Berk, he is charged with several forms of treachery and is locked up. Alvin tries to propose a deal with Stoick and Hiccup about reclaiming his island from Dagur and having the Outcasts allies to Berk, though they refuse. Snotlout later checks on him, and Alvin says the two of them are a lot alike. When the warning call sounds, Snotlout lets Alvin out to help. He even assits Stoick in the fight. When Stoick is captured, Alvin convinces Hiccup not to go after Dagur. He is later locked up again by Snotlout.

In "Cast Out Part II", Hiccup releases him from jail so he can aid Hiccup in rescuing Stoick. Alvin helps Hiccup infiltrate Outcast Island (where Dagur is holding Stoick) by diving in a cave underwater where they find Mildew. After they devise a plan, Hiccup goes to rescue Stoick, but is captured. Whispering deaths suddenly burst from the ground, and in the ensuing chaos, Alvin frees Stoick and Hiccup. After the battle, an enraged Dagur charges at Hiccup, but is knocked down by Alvin, causing Dagur to panic and call out for Hiccup. The episode then cuts to Alvin and Stoick sitting on a cliff, where Stoick forgives Alvin and the two restore their friendship.

In "Return of Thor Bonecrusher", Alvin were captured by men working for Viggo Grimborn and Krogan.

In "King of Dragons, Part 2", Alvin came to help protect Berk while Stoick recovered from a previous fight with the Dragon Hunters. 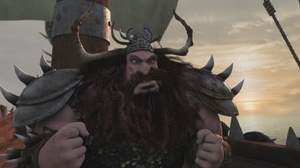 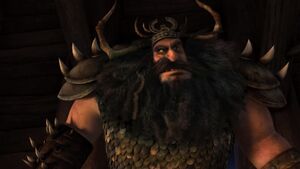 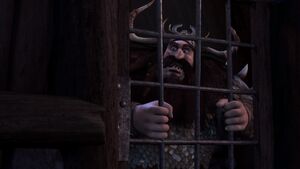 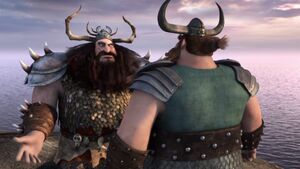 Alvin talks about the past with Stoick. 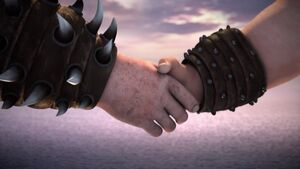 Alvin and Stoick shake hands, becoming friends again as they used to be.