Surf the Dark side of the force

Destroy the Republic with her hyper canon
Kill Karre (all failed).

Am is the main antagonist and one of the two titular characters (alongside Karre) of "The Twins", an episode of the non-canon 2021 Disney+ anime anthology series Star Wars: Visions.

She is one of two twins born into the dark side. From the moment she was born, she was prepared to sacrifice everything for the dark side together with her brother, and they were both trained at destroying planets by being part of the weapon that destroys the planets.

She was voiced by Ryoko Shiraishi in Japanese and Alison Brie in English.

Am is wearing black armor with a black mask that has a small resemblance with Darth Vader's mask, which is not surprising considering the armor itself being the prototype of new variant of Dark Armors — the same type of armor Darth Vader wears. During her fight against her brother for the power source the mask is ripped off her as the crystal cracks. It is then revealed that she has long blond hair and bright blue eyes.

Am and Karre were cloned through the power of the dark side. Their mission was to bring order to the galaxy with their power. Am is now copilot together with her brother Karre at conjoined imperial starships.

The final adjustments to the hyper cannon have just been completed, which means that it will soon be operational. The cannon’s firepower will be at full strength when the high-purity energy has been extracted from the power source in the central core. It is the same power that is transferred into the twins' dark armor. When the refined dark energy is unleashed through the ship’s hyper cannon, it will be easy to destroy a planet or any star system that is against the Empire.

Am is ready to use the cannon to fulfill the mission, even after B-2ON tells her about his concern about the effect the dark armor, which is only a prototype, could have on the twins physical body.

When they receive an alert from Central Block B-25 saying that the reactor core appears to have been stolen, this means that the hyper cannon cannot be charged. It is only Am and Karre who can access the chamber where the reactor core is kept. Am seems to suspect that Karre has stolen the core at once.

Then Am alongside many stormtroopers confront Karre asking him where he was planning on going with the core. She thinks Karre is a fool because he says that he is going to bring the power core to a galaxy far far away. She wants him to hand over the power core and then she will forget it ever happened. When he refuses she says that she will take it by force but before they start fighting, X-wing powers up and R-DUO helps Karre escape. As they escape they shoot at the stormtroopers creating a lot of chaos.

Then Am stops Karre in the X-wing from escaping by using the dark side of the force standing on top of the starship. She tries to get the power core to return to her by using enormous force from the dark side. She is successful but Karre grabs it and is torn out of the X-wing. Am and Karre then stand on opposite sides of the starship both trying to get hold of the power core. This results in them tearing the power core apart and Am is impressed by the beauty of the Kyber crystal. As both Am and Karre keep grabbing at the crystal it is ripped over in two pieces. It results in Am losing her mask.

We then see Am screaming continually, and right after Am asks if it is her screaming and it turns out that Karre is showing her the future in the hope that if she sees that she will die if she uses the power of the kyber crystal. However Am is not moved by what she has seen. She does not fear death, she and Karre were born from the dark side of the Force and made to bring back order. They keep fighting after Am powers up her armor with one piece of the crystal and Karre uses the other side of the crystal to power up his lightsaber. At one point she uses so much power that Karre is thrown of the starship. As he is rescued by R-DUO in the X-wing, he sees Am screaming as he had seen in his vision. He can see that she has released too much power and now she no longer control is which is making her armor overloading. Karre and R-DUO saves her by using the hyperdrive from the X-wing and the lightsaber but it destroys the starship and stripes Am of her armor.

She is very dedicated to the dark side of the force and fulfilling her mission even if it could kill her or she has to kill her own brother. Karre thinks she is stubborn.

Am is an expert pilot who typically flies an imperial starship and is able to fight with six lightsabers at once thanks to the four extra robotic arms attached to her suit. Her sabers are unique in that they are able to extend and wrap themselves around objects such as another lightsaber blade. She can use the dark side of the force to lift people from the ground and prevent the X-wing from escaping. Her power is incredibly immense, given that the battle between her and her brother ended up obliterating the Star Destroyer they were on. 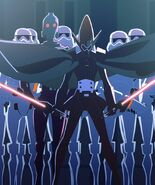