Have Isaribi sink more ships so he can steal their resources.

Create an army of undersea hybrid-shinobi and sell them to all nations in order to evolve the naval warfare.
Become the top scientist of the world
Kill Naruto, Ino, Shino, and Anko.
Get revenge on Orochimaru (all failed).

Amachi (in Japanese: アマチ, Amachi) is the main antagonist of the Kaima Capture Mission Arc of Naruto. He is a scientist who used to work for Orochimaru. In the past, he conducted illegal experiments on the citizens of the Land of Sea.

He was voiced by Hideyuki Umezu in the Japanese version, and by Doug Stone in the English dubbed version.

Like Orochimaru and Kabuto Yakushi, Amachi is interested in his scientific experiments. Amachi is violent by his actions such as sending Isaribi out to attack ships and for conducting illicit experiments on innocents from the Land of Sea. Amachi is also arrogant and thinks that he can continue to manipulate Isaribi and can fight Anko and Naruto. Amachi also prides himself being called a monster multiple times by Naruto and does not feel remorse for terrorizing the people of the Land of Sea or ruining Isaribi's life. Despite his cruelty, Amachi respected Orochimaru for being a genius scientist. When Orochimaru cut off his support for Amachi's experiments, Amachi did not take that well wanted a level of vengeance on the sannin. While captured by the leaf ninjas, Amachi is not willing to give important information away such as giving away Orochimaru's location to Anko.

In the past, Amachi used to work alongside Orochimaru in the Land of Sea. They work to abduct the citizens of the Land of Sea and put them through illicit experiments so that they can create a human that can breathe under water. As a result of their abductions, everyone who was taken to be experimented on did not return to the Land of Sea. Amachi also witnessed Orochimaru giving Anko the Cursed Seal of Heaven mark when she was a young girl. Orochimaru left the Land of Sea and Amachi continued his experiments on the citizens of the Land of Sea. Amachi found Isarabi and successfully turned her into a human-fish hybrid. He coerced her into attacking ships so that he can one day turn her back into human. At some point, he experimented on himself and managed to turn himself into a fish-humanoid. Unlike Isaribi, Amachi can transform back into a human.

After the events of the chuunin exams, Yoroi Akado and Misumi Tsurugi came to help Amachi. Orochimaru also returns to the island to talk with Amachi about their experiments. During his meeting with Orochimaru, Amachi had the moment to meet Sasuke Uchiha briefly. Amachi continues to coerce Isaribi into attacking the ships so that he can get his hands on the resources on the ship. Amachi eventually meets the leaf ninja in his hideout when he came face-to-face with them. He attempts to trap them which results in them being expelled from his hideout.

Amachi confronts the leaf ninja on one of the ships after having Isaribi attack them. Naruto manages to talk Isaribi out of her actions leaving her to hesitate. Amachi fights Anko and manages to gain the upperhand over her. Amachi confronts Isaribi and gets angry when she no longer wants to go along with his schemes. Amachi transforms into a stronger fish-humanoid form and attacks Naruto. Naruto soon finds himself trapped by Umibozu, a creation of Amachi that is made out of water. Naruto uses his nine-tails chakra form to burst out of the water creature and defeats Amachi with his brute strength. Amachi is detained by the leaf ninjas. Umibozu attempts to attack Naruto until the latter summons his giant frog, Gamabunta to help defeat Umibozu.

When Amachi is detained by the leaf ninjas, he mocks the ninjas and mocks Isaribi saying that when she was done working for him he was going to dissect her instead of turning her back to human. Anko asks him where Orochimaru was but Amachi refuses to give her an answer. He is taken by the leaf ninjas and arrested. 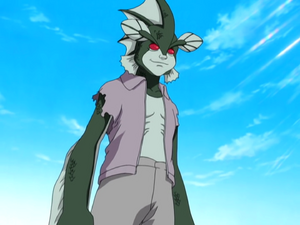