Affable Right-Hand
Amado (Japanese: アマド), is a major antagonist in Boruto: Naruto Next Generations. A member of Kara, he assisted Jigen in forcing the kama seal onto multiple children to test them to become Jigen's vessel.

He was voiced by Akio Ōtsuka.

Amado is a reserved, stoic and detached member of Kara and does not show too much emotions outside from being calm. Amado doesn't care at all for the child test-subjects, as he does not show any compassion as they died, but at the same time he is more realistic and doesn't seem to enjoy taking their lives, as he asked Jigen to find an alternative solution to prevent too many people from dying. A relaxed and practical man compared to Delta who is shown to be wrathful, the only time Amado shows surprise is when Delta angrily kicks open the lid of her containment damaging it, which clearly annoyed him. Although he had served Kara loyally, it has been indicated that he had to be promised what he desired first by Jigen and Jigen even saw it as being necessary to remind Amado he would fulfill his desire, indicating that Amado was more loyal to his personal desires than the organization.

It was later on revealed that Amado cares more about humanity as a whole and Earth than Kara, having betrayed the organization the moment he secured the right momentum. Despite his willingness to perform many lethal experimentation, Amado admitted that he was disgusted with the Otsutsuki Clan's way of killing all life on planets just for evolution, intending to deal with not only Isshiki Ōtsutsuki but also the entire clan, showing he did have a sense of morality. In addition, he also did not place an explosive collar on Shikadai despite the potential that Shikamaru would realize that it was a bluff. However, Amado was more than willing to make sacrifices to deal with the Otsutsuki, as shown by how he left Koji Kashin, his own creation, to die at the hands of Isshiki, knowing fully well he never stood a chance against a full-power Isshiki and could only defeat a weakened Jigen.

Although being an Inner of Kara means being a complete monster in terms of power and ability, as the head of Kara's research and development section, it is unclear how high Amado's combat abilities are compared to the other Inners. From what has been seen, he appears to be a very methodical and well-equipped man, skillfully using a variety of technology to prevail. He can somehow manifest such weapons from his hands even when immobilized, such as a Scientific Ninja Tool capable of emitting powerful sonic waves that could repel and reverse the Shadow Imitation Technique, which he used to easily defeat Shikadai, Inoijin and Chocho, and a drug capable of knocking people out that he administers through needles from his gloves, as well as being fast enough to easily bind Shikadai in an instant.

As his position in Kara indicates, Amado is an extraordinarily intelligent man with incredible abilities in science and technology, acknowledged by even Kawaki to be a technological genius and with abilities proven superior to even that of the extremely intelligent scientist Katasuke Tono, being Kara's main engineer and scientist. He provided Isshiki with the means to transfer his Kāma to others through his scientific expertise, although it had a low level of success that killed many people until Kawaki successfully survived and received it. He was also able to advance and proliferate the technology of scientific ninja tools with the research of Katasuke given to him by Koji, amassing and further refining the technology well beyond the capabilities of even Konohagakure. In particular, he was said to have modified all the members of Kara with fearsome Shinobi-Ware, which also afforded him the opportunity to include shutdown commands into their Shinobi-Ware, though whether this applied to Isshiki's vessel Jigen remains unknown, and extensively modified Kawaki down to the level of his circulatory and nervous systems, implanting inside him an extremely high level of Shinobi-Ware in the form of microscopic scientific ninja tools implanted throughout his entire body, with even the genius engineer Katasuke Tōno expressing awe at the level with which Amado had turned Kawaki into a living Scientific Ninja Tool and later noting that it was above his own level of expertise. The aforementioned technology is so advanced that even the likes of Katasuke was shown to be unable to understand the level of technology Amado used, as he couldn't create an artifical arm for Kawaki due to Amado modifying it, and Delta noted Amado would be the only one capable of restoring the arm he lost to her Destruction Beam. Amado himself confirmed it would be easy for him to restore Kawaki's arm. Other creations of Amado included includes devices that could heal virtually any injury, weapons that could counter an individual's regenerative abilities, devices that could absorb, store, and release absorbed ninjutsu, and a powerful virus capable of incapacitating those who inhale it. He could also clone humans, as he created Koji Kashin, using Jiraiya's DNA.

Aside from his incredible scientific and technological abilities, Amado is an extremely cunning strategist, manipulator and deceiver, having been able to hide his desire for a mutiny from all members of Kara, except Isshiki, while simultaneously carrying out acts to free Kawaki and guide Konoha into learning about Isshiki and the Ten Tails. His defection also proves Amado's skill in planning several steps ahead, such as pretending to plant an explosive collar device on Shikadai to use him as a leverage against his father to get Konoha to listen to him, making it look convincing by detonating a genuinely explosive collar, which fooled Shikamaru and the others. He came up with a plan to force Isshiki to reincarnate in Jigen's body to remove Kawaki's Kāma by having Koji attack him when he was critically weakened from his victory over Naruto and Sasuke while deceiving Koji into believing he could defeat Isshiki even though he never intended for him to make it out alive, which even earned him Isshiki's praise.

One day after gathering all the abducted children, Jigen and Amado both held the children in plastic containers filled with water. Amado would help Jigen force the kama seal onto each test subject to test their strength and whether they can handle the seal. They would do this for the purpose of getting a new vessel for the Kara organization and for Jigen. However, for each child that Jigen force the seal onto the child would die from the seal. Amado expressed a level of concern for their progress in getting the vessel since almost all the children died but Jigen reminds Amado that finding the vessel is very important. The last of the test subjects, Kawaki, was successfully made into the vessel for Kara. Amado would then extensively modify Kawaki, implanting countless microscopic Shinobi Wares throughout his entire body and altering his body tissues to a cellular level to grant him powers unrelated to Kama. Kawaki also noted Amado had modified all other members of Kara with it, but so far only Delta, Boro, Ao and Garo proved to have such technology in their bodies. He was also in charge of Kawaki but Kawaki managed to escape from him. Afterwards Jigen sent him to another mission but refused to say what it is.

Amado was mentioned by Jigen to have been assigned to another mission that is strictly hidden, with Jigen refusing to discuss the details with the other Inners. Amado appears in a room that contains replicas of Delta to help revive her after she ended up dying from her battle against Naruto Uzumaki. He did not like Delta's temper when she kicked open the pod after her revival and remarks on her anger. Amado overhears the conversation from Delta about the progress at retrieving the vessel and that Boruto Uzumaki contains the kama seal.

When Jigen returned from his battle against Naruto and Sasuke, Amado treats Jigen and tells him that he will be back at full power in the next few days. Later, Koji Kashin returned, and Amado realized that he was planning on killing Jigen and decided to join him. Delta confronted them, but Amado shut her down. Koji used his reverse summoning to transport Amado outside of Konoha.

Amado was confronted by Team 10. They tried to fight him, but he incapacitated them. Amado captured Shikadai and put an explosive collar around his neck. He came in contact with Shikamaru, and offered to share information about Kara.

Amado was taken to interrogation. He claimed he needed asylum, as he would be killed if he returned to Kara. He explained to them the history of the Otsutsuki, and how they use the Ten-Tailed Beast to grow a God-Tree in order to steal the Chakra from planets. He also told them that Jigen became a vessel for Isshiki Ōtsutsuki after being branded with Karma. He then revealed that he and Koji worked together to help Kawaki escape, and to destroy Jigen. Through Amado's glasses they were able to see Koji's confrontation with Jigen. As the battle continued, Amado explained the purpose of the kama seal and how Momoshiki planned to use it to eventually take possession of Boruto's body and kill him. He also explained that since Isshiki is forced to take full control of Jigen's body, Kawaki's kama seal would disappear. With the scout toad done for Amado reveals that Koji never could survive his battle against Isshiki.

With his citizenship in the village recognized, although he is not allowed to leave the village without permission and must give Konoha all his technology to be allowed to use the lab, Amado told Shikamaru that the bomb around Shikidai was a fake and that he used a real bomb as a decoy in order to get Naruto's attention and to get him to take the term of his deal seriously. He then began to strategically advise them to deal with Isshiki's inevitable assault, lecturing Naruto's desire to back up Koji by reminding him that Isshiki could just teleport to Konoha to retrieve Kawaki and not engage him and Sasuke, as with Kawaki in Konoha and Isshiki only having a few days to live, he would definitely attack Konoha. Urging for the civillians to be evacuated, Amado advised that Kawaki be hidden with Naruto and Sasuke there to protect him and made it clear that no matter what the cost they must defeat Isshiki before he could implant a Kama on Kawaki.

After Kawaki wakes up, Amado updates him on the situation and assures that while Isshiki's might is certainly overwhelming and he is even more of a monster than when he was Jigen, as long as he can't implant another Kama on Kawaki, he'll lose and die. He admits that while Naruto, Boruto and Sasuke are incapable of defeating Isshiki in raw power, Boruto does have something that can be used against Isshiki, as Isshiki can't kill Boruto and is forced to feed Boruto to the Ten Tails to birth a powerful Chakra Fruit, and as such, he can potentially be used as leverage. Amado does admit he's got no other plans that can defeat Isshiki in battle if Naruto and Sasuke are defeated along with Boruto, but his plan was the only one he had when Kawaki angrily attacks him and reminds him if Isshiki defeats Naruto and Sasuke as well as Konoha, Amado will die too. 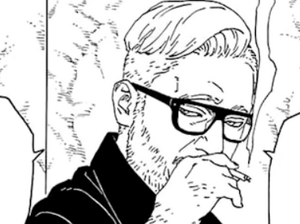 Amado in the manga.