Kill on the orders of his creator, Ruvik, especially Jimenez and Sebastian.

Hybrid
Amalgam Alpha is a monstrous boss encountered in The Evil Within and it's DLC The Evil Within: The Execution. It's the subconscious of all the individuals who died in STEM modded into one horrific shape.

When putting STEM through trial runs, many subjects died, however their subconsciouses molded together in one horrific shape - The Amalgam Alpha.

Though it looks like a mesh of corpses, the Amalgam seems to have two main heads and the front of it's body is a mouth which allows it to roar and consume victims. This implies it's more animalistic than a mindful killer though it's ability to take orders from Ruvik and one death scene where it locates Sebastian hiding beneath a car and using it to crush him shows it has some intelligence.

The Amalgam Alpha, despite its monstrous frame is fast and can easily crush victims with its own hands but the true weakness is it's under-eye but that can only be revealed after dealing heaby damage to the creatures, however, if the player also gets too close to the eye the Amalgam will devour you whole.

The Amalgam Alpha is first encountered at the end of Chapter 8 where it suddenly appears behind Sebastian whilst they are traveling back through the asylum. It immediately chases them through the corridor until they reach the reception desk, where it breaks off the pursuit.

After Marcelo Jimenez attempts to connect Leslie to STEM in order to find a way out the mindscape, his actions draw Ruvik's attention and the Amalgam is summoned in the chamber. Although Sebastian and Leslie manage to evade the beast, it proceeds to crush a hysterical Jimenez before hurling Sebastian into a underground car park where it engages him in a final battle which Sebastian wins by shooting the Amalgam's under-eye.

The Evil Within: The Executioner

The Amalgam Alpha is the second-to-last boss encountered in the DLC. It is listed in STEM as subject CB-210, a psychiatric patient. When fighting the Amalgam Alpha, the easiest way to deal the greatest damage is to use the cars scattered around the parking garage. It is not recommended to use melee attacks on the Amalgam Alpha. When Amalgam flings one at the player, the player is able to hit it back at the creature. One must wait until the car explodes in front of the Amalgam, as this temporarily stuns it. After a car explodes on Amalgam, it is rendered completely defenseless and the player can go in for melee attacks. However, flinging cars at Amalgam Alpha may not always work, since it sometimes repels cars with a purple aura. 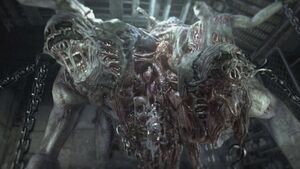 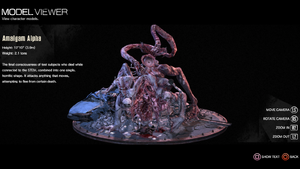 Add a photo to this gallery
Retrieved from "https://villains.fandom.com/wiki/Amalgam_Alpha?oldid=3316746"
Community content is available under CC-BY-SA unless otherwise noted.