Praetor of the Indoline Praetorium.

Cleansing the core crystals.
Quaestor of the Indoline Praetorium (formerly).

Absorption (Driver of an Aegis)

He was voiced by Junichi Suwabe in Japanese and Corey Johnson in English.

Although Amalthus appears to have a young appearance, he is actually a very old man, having lived before the events of the Aegis War. He has light blue skin, white hair, and wears a royal outfit. After absorbing all of the Core Crystals that he has gathered, his general appearance has taken on more of a monstrous appearance, in addition to gaining red eyes and blue tentacles made out of energy.

Initially, Amalthus appears to be a calm and respectful man. He is very appreciative, welcoming and caring for his guests, to the point that he allowed them to stay at his Sanctum. However, in truth, Amalthus is a cold-hearted and psychopathic individual who is hell-bent on the destruction of humanity. Ever since the death of his mother, he has developed a motive of wiping out humanity from existence. He believes that it is the Architect's will of cleansing the world by destroying humanity. According to Pyra, Amalthus' hatred and anger is the main influence of Malos' destructive and dangerous nature.

Despite this, he is not a complete monster, as he still holds a heart for others. This is shown when he saved Zeke from near death for Pandoria's sake.

Many years ago, Amalthus and his mother were on the run from a group of men. His mother decided to get rid of him, by pushing him down a tree, in order for him to save his life. When Amalthus awoke from his fall, he stumbled around the forest, until he came across the camp of the men who killed his mother. Devastated at the sight of his mother's corpse, he grabbed a rock and proceeded to kill one of the men with it.

Since then, Amalthus has traveled around Alrest, assisting those in need and sharing his ideas. When he walked around in a forest, he came across a house where he discovered a soldier that he healed was ready to kill a woman and her child. Amalthus, however, prevented the man from doing so and instead killed him. He then took the baby with him, calming it down, and watched the skies, wondering what the Architect's true intentions were when creating the world.

Some time later, Amalthus traveled to the World Tree, where he managed to reach Elysium. There, he came across the Aegis Core Crystals, which he ended up taking home with him. When he returned to his home, Amalthus grabbed the purple Core Crystal, which as a result, awoken Malos. Malos proceeded to destroy humanity, while Amalthus left the other Core Crystal for the time being.

Eventually, Amalthus passed down the other Core Crystal to Addam, who unleashed it, awakening the Aegis Mythra. Together, they were able to defeat Malos in the Aegis War. After the war, Amalthus became Praetor of Indoline Praetorium by poisoning the former Praetor Rhadallis and began to gather Core Crystals around the world. He would later use these Core Crystals to create Blade Eaters, by fusing them with children.

At some point, Amalthus came across Pandoria, who was grieving over the fact that Zeke was ready to die. Amalthus decided to split Pandoria's Core Crystal and place it in Zeke, making him a Blade Eater. Preventing him from death, Amalthus promoted Zeke as his special envoy and gave him the task to find the Aegis and its new Driver.

Zeke managed to fulfill his task and brings Rex (along with his companions) to the Indoline Praetorium, where they met with Amalthus himself. Rex tried to properly introduce himself, but Amalthus assured that it was not needed, as he considered him and Rex as equals. Rex then hands him back the dagger that he once wielded when Minoth (now named Cole) was his Blade and talks to him about how he wishes to reach to Elysium. Amalthus replies that he thought of the same thing as well and that he will assist him in his quest, but as he spoke, Rex felt the presence of Malos within him.

Later on, Amalthus is seen outside looking at an ancient painting, while discussing with Pyra/Mythra about whether humanity is changing or regressing itself.

The next day, Amalthus hears a Judician Titan Weapon is attacking Urayan force’s unprovoked in Temperantia. He sends for Rex and the party to meet him at the Audience Chamber to discuss the recent turn of events. Enraged upon hearing this, Morag and Brighid leave to investigate while Amalthus asks Rex and the rest of the party to help with the investigation.

After the party defeat Jin, the one responsible for provoking Uraya, and shutting down the Judician Titan Weapon, both Urayan and Ardanian forces prepare to attack one another with their respective nation’s Titan weapons until the intervention of Amalthus and Indol, resulting in a ceasefire.

Amalthus holds a ruler’s congress with all of the nations’ leaders. He reveals that Mor Ardain did not issue the attack and that Torna was responsible. To prove his point, he had Zeke, the crown prince of Tantal; acting chairman of Argentum, Niranira; and the Aegis Mythra attend as mediators. He reveals the Aegis Malos is involved, and it was none other than Amalthus himself who unleashed him upon Alrest 500 years ago. He calls himself a fool for forbidding anyone from entering the World Tree, and suggests to lift that restriction with all parties agreeing.

Mythra stays after the ruler’s congress much to the appreciation of Amalthus, though she makes it clear she still doesn’t trust him. She further tells him that Rex is bound to cross paths with Malos, sooner or later. He expresses surprise on her devotion to Rex, with her telling him it’s for both of their sakes. She then brings the question to Amalthus, asking what is it he is living for, something he is unable to answer.

Mythra asks why Amalthus resonated with Haze, the original identity of Fan la Norne. Amalthus explains her usefulness in repelling attacks from Torna. Mythra further questions why Amalthus doesn’t have any other Blades in his possession; he explains he is no fighter despite being a Driver, going on further to explain his faith in the Indoline monks getting the job done. Mythra questions Jin’s decision to use Torna’s name as it fell during the Aegis War. Amalthus surmises it to be loyalty, nostalgia, or possibly both since Jin was a Blade of Torna once, though he does not know fully, reminding her that only those present can truly know what happened, which Mythra rhetorically asks if he was one of those people who lived in that time to which he tells her is exactly why he is offering his cooperation.

Amalthus holds a funeral for Fan la Norne with many attending to pay their respects, though Mythra and Nia note the unusualness of Fan, despite being a Blade, still having a physical body as opposed to being a core crystal.

Rex and the party later walk into the audience chamber where Amalthus is cleansing the core crystals. Once he is done, Rex asks what Amalthus was doing to which he explains he was cleansing the core crystals which effectively increases their resonance rate. He awakened the power through becoming Malos’s Driver. When Rex shows interest in giving it a go, Amalthus cannot confirm or deny, believing everyone is cut for something different.

After ending up in the Land of Morytha, Jin reveals to Rex and his friends that the reason Torna was destroyed was because of Amalthus.

Meanwhile, Amalthus begins preparations of leading his army to the World Tree, planning on destroying Jin and Malos. He sends a group of soldiers to order Rex to use the power of the Aegis and destroy the Tornan warship. However, Rex refuses and defeats them in battle. A hologram of Amalthus is then projected, in which he reveals that he was the one who stole Fan la Norne's Core Crystal, and as a result, is able to control the Blades and Titans. With this power, he forces Mythra into summoning Siren to destroy the Tornan warship, but she resists. Rex was then able to break Mythra free from the control.

Eventually, Amalthus begins to call in all of the Titans and commands them to destroy the World Tree. However, his mind control was eventually broken by Rex and Mythra, with the assistance of Poppi. Mikhail was then able to save them from being blasted to smithereens. While Rex and Mythra continue on with their friends, Mikhail proceeds to hold off Amalthus as long as he could. He sacrificed himself by coming in collision with Indol.

Amalthus survived the explosion, however, and with the power of all the Core Crystals he's absorbed, he confronts Rex, Jin and everyone else in the World Tree. He kills Akhos and Patroka and absorbs their power, then proceeds to fight the heroes. He is defeated, then Jin proceeds to use his powers to freeze him to a wall, while impaling him with ice spears. Amalthus begins to slowly die, questioning why the Architect won't answer him when he calls. Before he dies, he got the chance to see his mother one last time in the light, reuniting with her at last.

In Super Smash Bros. Ultimate, Amalthus appears as one of the game's many spirits, being first introduced in Pyra/Mythra's spirit board. An Ace-rank support-type spirit, he makes the user's attacks stronger if they manage to deliver the first attack in a fight. In his spirit battle, the player must face against five Robins before facing a giant Dark Samus on the Ω variant of Shadow Moses Island in a stamina match. Furthermore, the giant Dark Samus has "super armor" on his attacks and slowly recovers health, although it is slower to balance this out.

Dark Samus references the face that Amalthus have absorbed his victims like Dark Samus herself. The puppet fighter's giant size references Amalthus's monstrous transformation, which resembles a giant blue Dark Samus. The Robins represent the Indoline loyalists who serve under him. 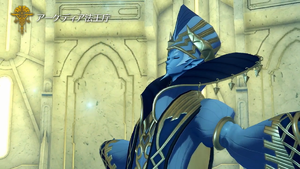 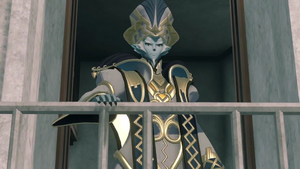 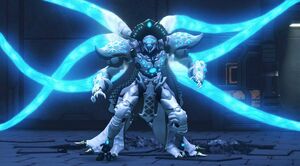 Amalthus charged by all the Core Crystals he absorbed.