Director of the Agency

Using any questionable means necessary to apprehend criminals and uphold the law.

Exploit SANCTUS resources such as the LOTUS Virus.
Have Bruce Wayne infiltrate the Pact.
Stop the Pact.
Keep Gordon from interfering with her operations.
Shut down SANCTUS (all succeeded).
Kill or capture "John Doe"/The Joker (succeeded; captured only).
Prevent Harley Quinn from leaving Gotham and arrest her (succeeded/failed).
Keep Batman on her side and convince him to work with her (succeeded/failed).
Catch The Riddler (failed).
Create an elite team of federal operatives from super-criminals, such as members of the Pact (succeeded/ongoing).

Amanda Waller is a major anti-villainess in Telltale Games' Batman: The Enemy Within. As the director of the clandestine government organization known as The Agency, Waller initially appears in Gotham City tracking the Riddler and offering to help Batman and the GCPD.

However, as the game progresses, it becomes increasingly apparent that Waller herself is no hero, and can even become a full-fledged enemy depending on the player's choices. At the same time, the story makes it clear that she is honorable in spite of her crimes.

She is voiced by Debra Wilson, who also voiced Crying Wolf in Metal Gear Solid 4: Guns of the Patriots, Renata Glasc in League of Legends, Jormag in Guild Wars 2, and Batari in Far Cry Primal.

Amanda Waller is introduced in the first episode of Batman: The Enemy Within as the director of the Agency, a clandestine government organization that is after The Riddler, and are eager to bring him in for past crimes. GCPD Commissioner James Gordon is immediately wary and distrustful of her, disapproving of Waller's history of underhandedness and reputation for ruthlessness. Waller for her part looks down on Gordon as a meddling fool, and almost immediately seeks to ingratiate herself with Batman (though how much or how little he goes along with this depends on the player's choices).

If Batman chooses to interrogate Eli Knable, Amanda Waller will watch him (and disapprove if he chooses a merciful approach versus a more violent approach that she admires). On the other hand, if Bruce Wayne gets what he needs out of Rumi Mori, Waller will correctly deduce that Batman was involved and will be livid. However, she decides to maintain her alliance with Batman anyway out of pragmatism... and also reveals that she knows who Batman is. Later, after Batman is injured by Bane, he can contact Waller for help, at which point she will give him a means of counteracting Bane's Venom. Meanwhile, Waller's relationship with Gordon further deteriorates, especially if Gordon is told by Batman that Waller knows his identity. Nevertheless, the tense alliance is maintained, with Waller having Bruce infiltrate Harley Quinn's Pact as a spy. Later, should Bruce blow his cover later on to save Catwoman from certain death, Waller will be furious.

After the Pact is defeated and SANCTUS is shut down by the Agency, Waller expresses disgust at their actions... but also a desire to put what's left of their technology and science to good use. Should Batman disagree with her, Waller will be miffed. She also shoots down Special Agent Iman Avesta's suggestion to get information out of Mr. Freeze, and when she and Bruce/Batman do talk to him and learn more about the Pact's goals and what the LOTUS Virus does (and can potentially do), the pair realize that Waller is deliberately keeping them in the dark. After going to the Pact's hideout and discovering Riddler's body destroyed in addition to the samples of his blood taken, Avesta realizes that Waller intends to be the sole distributor of the LOTUS Virus cure, as a means of forcing the members of the Pact to work for her to get the cure they all seek. Disgusted with this and disagreeing with Waller's plan, Avesta secretly destroys the samples of Riddler's blood (something Waller later catches on to).

Waller later confronts a deranged Harley Quinn on the bridge leading out of Gotham, and a tense stand-off ensues. Depending on how Bruce Wayne dealt with the reveal that John Doe had killed several Agency members, he will either show up to help Bruce assist Waller and the Agency in stopping her, or rescue Harley Quinn from Batman.

If Bruce trusts John Doe, they successfully obtain the LOTUS Virus and apprehend Harley for the Agency. Afterwards, John refuses to hand over the LOTUS vial to the Agency. In response, Waller pulls a gun on him and tries to murder him, though Bruce stops her. This sends John into a rage, and he ends up stabbing Waller in the abdomen and blowing up part of the bridge in his retreat killing several Agency operatives.

Two weeks later, Waller forms a special task force (consisting of Harley, Bane, and Catwoman) and has the three members of the Pact forced to work for her via explosive shock collars, while she also issues a manhunt for Joker and Batman, and has the Agency try to apprehend the pair. When Batman comes to Joker's aid, Waller finds out and threatens to expose his secret identity if he doesn't turn Joker in. In response, Batman has Agent Avesta dig into Waller's history, where it's revealed that she deliberately kept parts of SANCTUS intact as a means of exploiting their science for her own ends.

Between this and various other unsavory acts she's taken as Director of the Agency, Batman has enough dirt on her to ensure that, if she exposes him, he will return the favor. So, they agree to an impasse (Batman can request Waller to either let Avesta leave the Agency peacefully and without prosecution, remove Catwoman from her special task force due to not being like the rest of the Pact, have Harley and Bane released from her special task force but then have the pair incarcerated at Blackgate Prison for their crimes, or don't make a request; regardless of either choice in which Waller will agree to if he agrees to hand over Joker to which Batman can either agree to or refuse to do so, but regardless she will still agree to his chosen request), which enrages Joker, who starts a fight with Batman, Waller and her special task force. He proceeds to kidnap Waller and takes her to the now abandoned Ace Chemicals plant, where he tries to kill her before Batman stops him. Afterwards, with Joker in custody, and she and Batman still at an impasse, she agrees to leave Gotham behind with the rest of the Agency, and depending on dialogue chosen for parting words, she will leave either as an ally or as an enemy.

If Bruce betrays John, then he goes and saves Harley on the bridge, while blowing up numerous parts of the bridge killing dozens of GCPD officers, Agency operatives, and civilians.

Waller remains an ally of Batman, and three weeks later, helps him try and stop Joker's violent revenge crusade against Gotham. After Joker and Harley are stopped, Waller in gratitude asks Bruce what to do with Selina, Gordon and Avesta involved in terms of special care from the Agency, and if he requests it, he can have Waller have Selina (Bruce can request Waller either keep her in her special task force, release her from her special task force with her criminal record expunged, or release her from her special task force but have her banned from Gotham and be made a person of interest for the Agency under their constant watchful surveillance just like with Mori), Gordon (Bruce can request Waller either rescind her earlier firing of him from the GCPD by giving him his title of commissioner back in addition to a medal of high honor, blacklist him from law enforcement, or have him retired from law enforcement due to being crippled via gunshots to both his kneecaps by Joker), and Avesta (Bruce can request Waller either let her leave the Agency peacefully and without prosecution for destroying the samples of Riddler's blood in a threatening tone, have her stay in the Agency without being punished, or let her leave the Agency peacefully and without prosecution in a calm manner but also let her work at Wayne Enterprises as their Chief Operating Officer) awarded with their chosen Agency special care offers. Waller then asks Bruce if she should arrest Tiffany Fox for murdering Riddler, to which he can allow or refuse and go talk to her herself. She then leaves Gotham behind with the Agency. 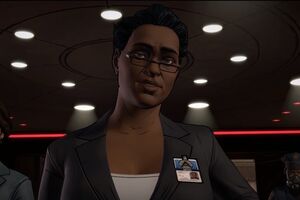 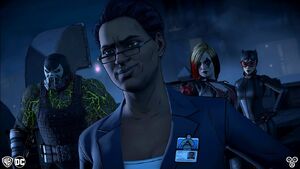