Amanda Young is a major antagonist in the Saw franchise, serving as a minor character in Saw, the secondary antagonist of Saw II and Saw III, and a posthumous antagonist in subsequent sequels.

She is John Kramer's secret apprentice (along with Mark Hoffman) and potential successor. At first, she seemed feasible to continue John's work, until it's revealed that she doesn't truly believe in his philosophy and simply was trying to find love and appreciation, due to her mental illness.

She was portrayed by Shawnee Smith, who also played Julie Lawry in the 1994 The Stand miniseries and Mariska in Lollipop Chainsaw. In the titular 2009 video game, she was voiced by Jen Taylor, who voices Cortana in the Halo franchise and Salem in RWBY.

Amanda Young's early life was never established on the films, although both writer Leigh Whannell and Shawnee Smith have worked on and discussed it. On the commentary for the Saw III: Director's Cut, Whannel stated that as a child Amanda had been abused by her father and neglected as a child, which lead to her being filled with rage as an adult. A deleted line from the original script for III has Amanda telling John that her father used to lock her in the dark for hours.

"When I was a little girl . . . my father would lock me under the stairs. I was terrified of the dark, and he would leave me in there alone. For hours." Because of her childhood, Amanda had never properly learned to deal with stress and emotional pain, and thus turned to self-injury as a way of dealing with her problems. While in prison, her abusive tendencies were replaced with heroin. However, after giving up heroin after surviving the Reverse Bear Trap, she returned to cutting, burning, and other forms of self injury. Because of her frail emotional state and somewhat mental instability, she is quick to anger, and often acts purely on impulse or emotion (such as trying to kill Eric Matthews and later Lynn Denlon).

The scene in Saw III where Amanda is shown cutting her inside thigh was not in the original script; there was only a brief scene that hinted at Amanda self injuring, in which Amanda is shown squeezing a razor blade (which was later replaced by a scene of Amanda squeezing a leather cutter). Shawnee Smith had been reading the book A Bright Red Scream prior to filming, and she firmly believed that it was necessary to show Amanda's self-injuring tendencies (for character depth), and thus insisted that the scene be filmed and put into the film. Still, some of the scene was cut, including a shot of Amanda using the cloth body of a doll on her bed to soak up the blood from her wounds.

Due to her temperamental behavior, Amanda possibly suffers from borderline personality disorder. As an adult, Amanda turned to drug use and self-mutilation. She was later framed by corrupt cop Eric Matthews and arrested, at which point her situation worsened.

At some point, Amanda was abducted by Jigsaw and placed in a trap that was described as being like a reverse bear trap; a device was placed around her jaws that would rip them apart. The only way to get herself out of the device was to get a key—a key that was in the stomach of man, who despite being overdosed on opium, was still alive. Amanda killed the man, successfully retrieved the key in time, and unlocked the trap seconds before it went off.

As she reeled from the experience, Jigsaw's "puppet" Billy arrived on his tricycle, congratulating her for still being alive and telling her that she would no longer be ungrateful being alive.

Upon being interviewed by police detective David Tapp, Amanda tearfully confessed that Jigsaw's actions had "helped" her. The same day as her interview, Jigsaw appeared in her apartment and recruited her.

Upon returning home, she was approached by Jigsaw, who recruited her as his second apprentice, after Mark Hoffman. The exact nature of their initial meeting is unknown.

As his apprentice, Amanda was told by Jigsaw that there was no going back from this life and that she would would ultimately give everything to him. Her first assignment was to kidnap Adam Faulkner, a photographer, for the purposes of Jigsaw's test. A deleted scene showed the two meeting prior and Adam flirting with Amanda.

Amanda helped Jigsaw set up the Bathroom Trap, placing Adam inside the bathtub. After the events of the test, in which Adam was left inside to rot, Amanda was plagued by nightmares and guilt of her involvement. She went back to the bathroom to mercy kill Adam by suffocating him with a plastic bag. Jigsaw knew about this but did not tell her so. This was the first time that Amanda would deliberately kill someone.

The events of Saw II had Amanda posing as another test subject in a house in which several apparent strangers were locked in a house in which a deadly gas was being pumped through. Their connection was that, like Amanda, all of them had been set up by Eric Matthews. Among them was Matthews' son. At one point during the game, Amanda was pushed into a vat of hypodermic needles to find a key by a drug dealer who was Jigsaw's intended target for that case.

During this time, Eric was part of another test: one to talk to the recently apprehended Jigsaw long enough to see his son again. Unbeknownst to Eric, his son was in a nearby safe all along. The tapes that showed his current predicament were not live. Failing his test, Eric brutalized Jigsaw and forced him to take him to the house.

There, Eric found himself in the bathroom from the first film. He was ambushed by Amanda and locked in a chain. Amanda's tape revealed to him that she was Jigsaw's apprentice, and that Eric was doomed to be left alone to die.

A deleted scene had Amanda walking back to Eric and stabbing him viciously through the throat. According to Whannell, it was this event that turned Amanda into a killer. The producers, however, wanted Eric to be kept alive for a potential sequel and, despite the director's fight to keep it in, the scene was ultimately dropped. Amanda unlike Hoffman seemed to have more empathy towards her victims.

Amanda would go on to make two traps by herself, but unlike John's in which the subjects had slim chances of surviving so long as they: followed his rules, are clever and determined enough, Amanda's were unwinnable. In the case of Troy, the door to his room was sealed shut, so he wouldn't have been able to get out when the bombs detonated and the chain that was hooked onto his mouth was impossible to being pulled out. In the case of Allison Kerry, Kerry successfully completed her trap, but it was designed to activate regardless of whether or not Kerry had unlocked the padlock at the front of the metal contraption attached to her rib cage. The fact that it was attached through her skin to her bones was a large indicator that the woman was going to die regardless. It has been suggested that both Hoffman and Amanda worked on this particular trap together.

Distraught, a now dying Jigsaw decided to give his apprentice one last chance.

As he lay on his deathbed, Jigsaw ordered Amanda to kidnap surgeon Lynn Denlon in order to keep him alive until another subject, Jeff Reinhart, completed his own test.

During this time, Amanda grew increasingly agitated and hostile towards Lynn upon seeing Jigsaw being operated on —especially when he told Lynn that he 'loved' her, when in fact he was delirious and thought he was talking to ex-wife Jill Tuck, something Amanda did not know. Later scenes revealed that Amanda, in the stress of her situation, had resumed her 'cutting'.

Amanda was told by Jigsaw to read a letter that he left her. Upon reading its contents, Amanda broke down and cried. The letter was revealed to be written by Hoffman in IV and in VI it was revealed that he had blackmailed her into killing Lynn (the consequence for not doing so would be that he would tell John that she was responsible for Gideon's death).

As Jeff finished his test, Jigsaw ordered Amanda to let Lynn go. Amanda refused, saying that Lynn hadn't learned anything and didn't deserve to go free. Jigsaw pleaded with Amanda to let her go, and that Lynn held Amanda's life in her hands. Instead, Amanda shot and wounded Lynn. At this point, Jigsaw revealed to Amanda that Jeff and Lynn had been husband and wife, and by shooting her, she had ended 'four lives'.

Upon seeing his wife shot, Jeff shot Amanda in the neck, fatally wounding her. As Amanda bled to death, a tearful Jigsaw told her that she was being tested all along—tested to see if she could keep someone alive...Lynn. He explained that by making her traps unwinnable, her subjects were merely victims, and she wasn't testing anyone's will to live, thus defeating Jigsaw's original purpose. As she bled to death, Jigsaw told her that he wanted her to succeed, but she couldn't. She then started to cough blood out of her mouth as she collapsed on the floor. She then closed her eyes and coughed her last breath and died.

It was revealed in VI that moments after she read the letter, she had visited Corbett's cell, and, in tears, told her not to trust the man who would be saving her that night (Hoffman).

Amanda Young appears in Dead by Daylight as a playable killer in the Saw DLC chapter, known as "The Pig" on January 23, 2018. In the game, she was revived by The Entity alongside David Tapp as one of its servants and took up the mantle of The Pig to hunt down survivors.

The Pig has two abilities. The first one allows her to crouch and then burst into a sprint afterwards. The second allows her to place reverse bear traps on dying survivors, traps which activate after a generator finishes repairing. The traps can only be removed in jigsaw boxes around the map and will kill survivors if they aren't removed after the timer ends. Her perks, Hangman's Trick and Surveillance, allows her to keep an eye out on survivors near hooks and generators while Make Your Choice punishes their altruism.

She is voiced by Christine Marsh. 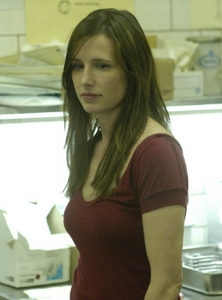 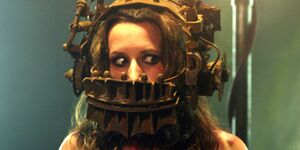 Amanda in her test. 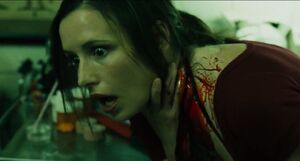 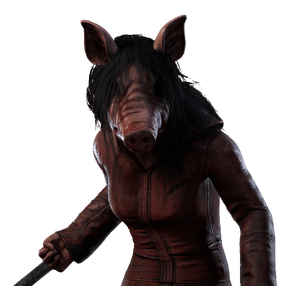 Amanda Young as The Pig in Dead by Daylight.