Unwilling power source of the Amaterasu.

Take vengeance on humanity for her eternal pain (ongoing).

Vengeful Prisoner
Amaterasu, also known as the First Pillar, is a major antagonist in the 2015 Japanese dark fantasy manga series Fire Force and its 2020 anime television series adaptation of the same name. She is the main antagonist of the VS. Special Fire Force Company 4 Arc.

Amaterasu was born over two hundred and fifty years ago before the outbreak of the Great Cataclysm. The Cataclysm was an apocalyptic event that saw the world covered in a sea of flames that almost destroyed every mass of land. In the aftermath, Amaterasu was one of the few survivors.

She possessed a link to the underworld Adolla that meant a perpetual flame burned inside her. A man later known as Raffles I trapped her in a container and built a massive powerplant around her that would later be named "Amaterasu" after her. With the girl as its power source, the Amaterasu would burn brightly for eternity and fuel an entire Empire that Raffles built around it.

For two hundred and fifty years, Amaterasu rested at the core of the Amaterasu forever burning. Eventually, she was twisted by the experience, seeking only to inflict pain upon those responsible for her torment. In the modern day, she was referred to as the First Pillar, as she was the first of the eight identified people to have a link to Adolla.

The First Pillar is voiced by Mao Ichimichi in the Japanese version of the anime and by Cherami Leigh in the English version. Leigh has also voiced Lucy Heartfilia in Fairy Tail, Sarada Uchiha in Boruto: Naruto Next Generations, and Asuna Yuuki in Sword Art Online.

The First Pillar, as the core of the Amaterasu, was only ever seen completely naked. She had clear sky-blue eyes devoid of emotion and shoulder-length unkempt blonde hair with a long fringe that partially covered her eyes. Shinra Kusakabe noted that she looked identical to her doppelgänger Iris. Like Iris, she had a slender figure and was fairly well endowed.

Little is known of the First Pillar's personality before her containment within the Amaterasu. That being said, being unfairly tormented for centuries within the core of the power plant gave her an intense disdain towards humanity in general. Her hatred was so unbridled that it was enough to corrupt a mind into sharing her rage in mere moments. She enjoyed watching people in mental and/or physical pain and usually bared a sadistic smile at the thought of causing chaos. However, her almost perpetual smiling only served as a mask for the immense pain she felt, as at least in her heart, the First Pillar cried eternally. Furthermore, her eyes were devoid of emotion, implying she was a husk of the person she used to be. 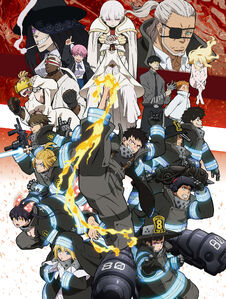 Amaterasu (top right) on the first key visual for the anime's second season. 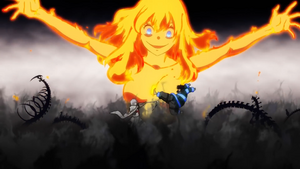 Amaterasu's fiery influence towering over the Kusakabe brothers in SPARK-AGAIN. 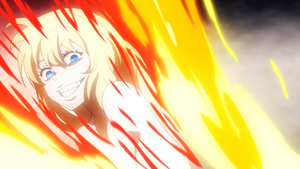 The First Pillar in SPARK-AGAIN, the first opening of the anime's second season. 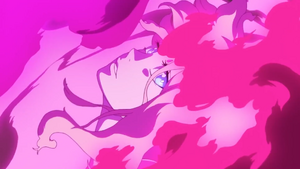 The First Pillar in Torch of Liberty, the second opening of season two of the anime adaptation.