Destroying everything around him

Amatsu-Mikaboshi is an embodiment of the chaotic nothingness (and an aspect of Oblivion) that existed shortly before the formation of the physical universe as anyone knows it that appears in Marvel Comics. He is an adversary to Hercules and many other heroes across space/time. He is the main villain of the event Chaos War.

Amatsu-Mikaboshi is one of the oldest beings of the Marvel Universe and is an aspect of Oblivion and the rival to Eternity.

At first, he was seemingly little more than a generic god of evil. However, this was all a guise by the real Mikaboshi, who was no mere demon or god but an Abstract who sought to end all things so as to return to his beloved chaos.

He has appeared in Hercules, the Ares mini-series and Secret Invasion, acting as an antagonist in almost every appearance he has appeared in, furthering his guise as a "god of evil".

Amatsu-Mikaboshi would also play a major role as the primary antagonist of the "Chaos War" event, in which he enslaved pantheons of alien deities and demons with the intent of destroying the multiverse, returning it to an endless sea of chaos and nothingness. It was during this event that he shed his guise as a "god of evil" so as to finally reveal his true power to multiple pantheons of gods, since he was no longer holding back he quickly changed from a manipulative entity into an outright destroyer as he quickened his apocalyptic plan to erase the entire existence and give birth to an endless sea of chaos. 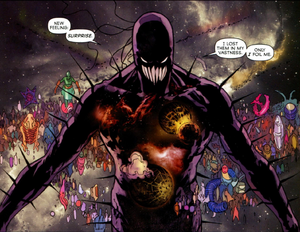 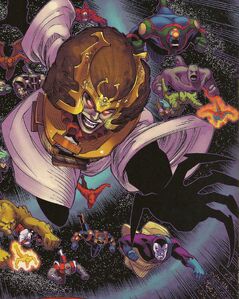