The Amazon Quartet are a group of four young ladies that part of the Dead Moon Circus and are some of the most powerful followers of Queen Nehelenia. They are all young girls possessing orbs called Amazon Stones that give them eternal childhood. Their names are Besu Besu, Cele Cele, Jun Jun, and Para Para. In the Japanese version of the anime and the manga, they are called the Amazoness Quartet.

The Amazon Quartet were playing in the forest when they found a dream mirror, which Queen Nehelenia spoke to them through, and they began working for her here when she gave them their orbs, to keep them young.

When it became clear the Amazon Trio could not find Pegasus, Zirconia sent them to eliminate the Amazon Trio. Para Para summoned a Remless named Mr. Magic Pierrot to kill them. However, Mr. Magic Pierrot was destroyed. From here, the Amazon Quartet took over searching dream mirrors for Pegasus. They never had to look into them, however, as they were told that the dream mirror that contained Pegasus would be a golden mirror. They searched several dream mirrors and sent several Remless to fight the Sailor Scouts when they tried to stop them, but all the Remless were destroyed.

The Amazon Quartet were always getting on Zirconia's nerves (though Nehelenia insisted he keep them around), often calling him "Zirc", "Zirco", "Zirc the Jerk", and "Zirc Face". They also disliked the idea of growing up, feeling it would destroy their dreams.

Eventually, the Amazon Quartet fought the Sailor Scouts, but were recalled by Zirconia and given power by Queen Nehelenia. Inside the circus tent, they gained the advantage over the Sailor Scouts, but when Sailor Mini Moon called Pegasus, Sailor Moon defeated them. They survived, and, after Sailor Mini Moon became trapped by Nehelenia, switched her around with a doll so they could ride Pegasus. They were unable to, however, and Zirconia imprisoned them inside mirrors in another dimension as punishment.

He eventually returned them to his room during his fight with the Sailor Scouts where he drained their power. The Sailor Scouts convinced them to crush their orbs, and that this would not destroy their dreams even though it meant giving up eternal childhood. Without their orbs, they no longer possessed Nehelenia's power, and couldn't be drained. During the Sailor Scouts' fight with Queen Nehelenia, they switched the golden crystal (which was in her possession) with a pineapple and gave it to Sailor Moon.

After Nehelenia was defeated and left Earth, the Amazon Quartet decided to leave quietly, saying they might see the Sailor Scouts again sometime.

In Sailor Moon Eternal, the movie of Sailor Moon Crystal that covers the Sailor Moon Supers season of the original 90s anime, and follows the manga more closely, the Amazoness Quartet are actually Sailor Guardians in their own right, but while they were still in their slumber, Queen Nehelenia awoke them early and corrupted them, turning them into loyal members of the Dead Moon Circus, pitting them against the Sailor Guardians. At one point, they've managed to capture the Inner Guardians in Sailor Mercury, Sailor Mars, Sailor Jupiter, and Sailor Venus, only to be stopped when the Outer Guardians, Sailor Uranus, Sailor Neptune, Sailor Pluto, and Sailor Saturn, arrive and rescue them. Later, when Super Sailor Chibi Moon and Super Sailor Saturn follow them back to the circus, Saturn attempts to reason with them and make them see sense that they are being manipulated. Her words seem to break through the Quartet as JunJun attempts to take Saturn's hand in a show of friendship, but Zirconia arrives and, thinking the Quartet have betrayed Nehelenia, imprisons them back inside their globes where they normally lay dormant, and captures Chibi Moon and Saturn as well. When Super Sailor Moon rescues Chibi Moon and Saturn later, Saturn recovers the Quartet's globes, and after Nehelenia is destroyed by Eternal Sailor Moon and Tuxedo Mask as their future selves, King Endymion and Neo Queen Serenity, Saturn asks Serenity to restore the Quartet, which she does, awakening them as their true selves as Sailor Guardians. However, due to their premature awakening, the Quartet have to return to sleep until the time comes when they are needed to support Chibiusa after she becomes a full-fledged Sailor Guardian. Saturn promises to look after Small Lady until that time comes, and the Quartet peacefully return to their slumber.

In the musicals, the Quartet become prominent during the Third Stage, particularly during Kessen / Transylvania no Mori (Kaiteiban) - Saikyou no Kataki Dark Cain no Nazo, where they were known as the Samael Quartet and had a very different background. Here, they were Homunculi that had been grown in Samael Flasks from Professor Tomoe's laboratory. This process required a pure heart to give the Homunculus a soul, and the Quartet had been created using Chibiusa's Star Seed. Their connection to her was limited since she had been rescued and her Star Seed removed from the flasks before they were fully grown, but they did have cryptic dreams and visions of one another.

The Samael Quartet were at times under the sway of the mysterious Lilith of Darkness. However, the friendship of Mandrake and their unconscious loyalty to Chibiusa ultimately broke through the spell, and they became the Sailor Quartet in order to aid Sailor Moon. 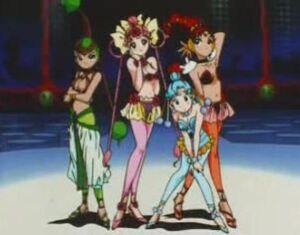 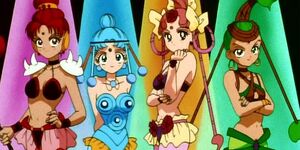 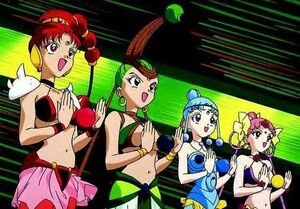 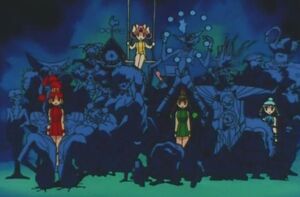 The Amazoness Quartet part of the wicked Dead Moon Circus. 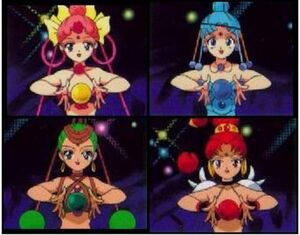