Can summon Remless (all members)

Fulfill their mission to become humans.

Betrayed Tricksters
The Amazon Trio are a subset of members of the Dead Moon Circus and villains in the Sailor Moon universe.

The Amazon Trio are Lemures created by Amazoness Quartet from circus animals to eliminate the Sailor Guardians.

In the Sailor Moon Super S anime, the Amazon Trio were created by Zirconia whom they feared. The Amazon Trio were tasked to seek out the Dream Mirror among the humans that contain Pegasus. The Trio choose their victims by seducing their preferred targets: Tiger's Eye going after girls slightly younger than himself, Hawk's Eye after older women, and Fisheye targeting men. Once their target is vulnerable enough, they ensnare them and force the mirror out while summoning a Lemures to deal with any interlopers.

When Zirconia finally reveals to them their true natures (those of animals), Fisheye fears particularly of their fate and questions why they do not possess dream mirrors like humans. Fisheye's change in perspective was attributed to the kindness of Usagi after Fisheye was rejected by Mamoru and also with the discovery that Chibiusa was the holder of the Golden Dream Mirror, which housed the dream Pegasus (Helios) he hid himself in. Fisheye's insolence nearly costs the life of the Amazon Trio, however, because Zirconia reads Fisheye's memory and mistakenly believes Usagi is the holder of the Golden Dream Mirror, Zirconia sends Hawk's Eye to steal the mirror. Fisheye and Tiger's Eye follow to stop Hawk's Eye while Zirconia plans to have the trio eliminated as soon as Usagi's mirror is revealed.

The Lemures sent by Zirconia shatters Usagi's dream mirror before Hawk's Eye has a chance to restore it to Usagi's body. Hawk's Eye ends up dying to protect Fisheye from an attack and gives him the power Zirconia granted him to stay human like so that they may finish off the Lemures. Fisheye and Tiger's Eye use the power to resurrect Usagi, realizing she is Sailor Moon, and also summon Chibiusa, believing that the pair is the only ones who can defeat the Lemures and avenge Hawk's Eye. Sailor Moon and Sailor Chibi Moon defeat the summoned Lemures but is it too late for either of them to do anything for the Amazon Trio, who have reverted to their animal forms. Soon afterwards, Pegasus, summoned by Chibiusa, grants them dream mirrors, knowing that the trio have suffered greatly and have truly changed for the better. They cannot, however, retain their current forms as humans and are taken away by Pegasus to the Crystal Forest. As he places them within the forest, he promises that one day they will be reborn as the humans they wish to be, with their beautiful dreams intact. 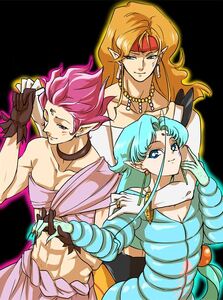 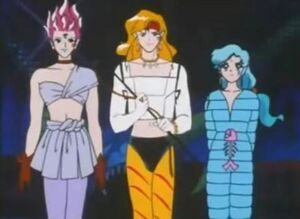 The Amazon Trio in their human forms. 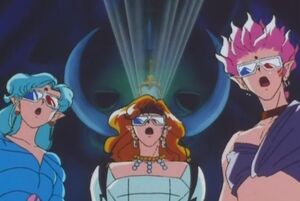 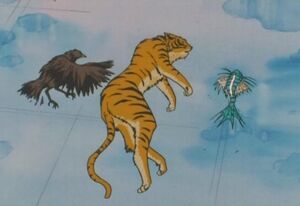 The Amazon Trio in their original animal forms. 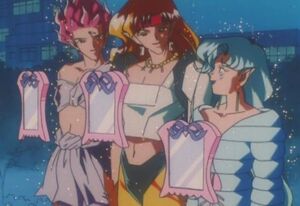 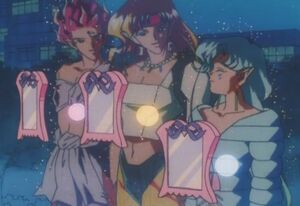 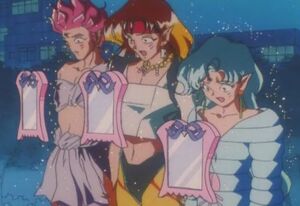