Have Ronal and Alibert for themselves.

The Amazons are minor antagonists in the 2011 Danish animated movie Ronal the Barbarian.

Their leader, the Amazon Queen, was voiced by Brigitte Nielsen, who also played Ludmilla Drago in the Rocky franchise and Karla Fry in Beverly Hills Cops II.

The Amazons captures the heroes Ronal and Alibert right after they escape from being captured by Volcazar's General while they're caught into a web by the foot. They subdue them with their spears. They bring them attached to some branches in front of their leader in order to decide their fate. She mistakes them for females at first. But when Ronal affirms both he and Alibert, the Queen is jubilant, believing the gods answered their prayers. Seeing finally the opportunity to carry on the tribe, the Queen orders the Amazons to put them into the sacred meeting cabin at once. The Amazons rush at them and lift them into the air. The Queen decides to use Ronal first and Alibert is reserved for tomorrow. Two women brings him in a wood cabin, to his dismay.

In the night, the Amazons celebrate around a bonfire and Ronal is taken to the cabin where Alibert is, very affaive and his face covered with traces of lipstick from the many kisses. Soon after, the Amazon Queen enters the cabin and only Alibert remains. She couldn't wait any longer and decided to break the ritual. So she begins to have sex with Alibert. However, the latter had a change of heart and has decided to genuinely help Ronal. He rejectes the Queen and this makes her very angry. With the help of a few warriors, she chases Alibert, trying to hit him with spears.

They are not seen or mentionned afterwards.

During their free time, they talk to each other, read some books and practise their spear throw or archery skills. They also like to dance around a bonfire during the night. They are warriors and they use spears or arrows as weapons. 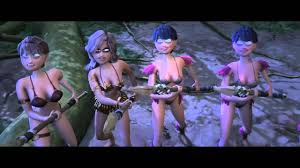 The Amazons capturing Ronal and Alibert.

The Queen receiving Ronan and Alibert. 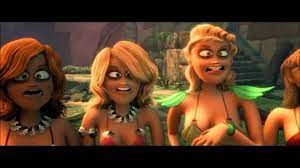 The Amazons disgusted because they think their prisoners are ugly women.

The Amazon Queen trying to force herself on Alibert. 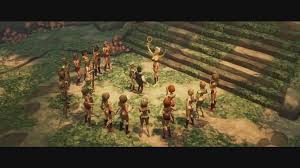 The entire tribe of the Amazons.

The Queen sitting on her throne.