He was portrayed by the late Kenji Ushio, who also played his brother in the original Kamen Rider TV series and in episodes 17 and 18 of Kamen Rider V3. He was "portrayed" (in more ways than one) by Shun Sugata in Heisei Rider vs. Showa Rider: Kamen Rider Taisen feat. Super Sentai, the same actor who portrayed Ryo Murasame/Kamen Rider ZX, which foreshadowed the reveal that Ryo disguised as the real Ambassador Darkness.

Ambassador Darkness is the leader of the Badan Empire and the brother of Ambassador Hell of the Shocker organization. He is a maniacal man who is hellbent on getting what he wants. He was the one that ordered Ryō's plane to be shot down, thus killing his elder sister. He then planned to complete a superweapon that would allow Badan Empire to conquer the world. He was later destroyed in the battle between the Kamen Riders and Badan by Kamen Rider ZX's ZX Kick.

In the episode in the magazine, he was transformed into Southern Cross who is a horned turban monster.

The nominal leader of the Badan Empire and younger cousin of Ambassador Hell of Shocker, as oposed to the TV Special in which they are twins. The two brothers were once known as General Damon and Colonel Gamon, who fought for the independence of a small Southeast Asian nation later christened "Gamon" after the supposedly deceased Colonel, who in fact joined Badan. Far more powerful than his brother, Ambassador Darkness cannot be killed by physical means, and can regenerate wounds as grievous as being cut in half in a short period of time.

Ambassador Darkness returns as a member of Badan Empire. However, it is later revealed he is Ryo Murasame in disguise, who assumed his identity to infiltrate Badan and destroy the Mega Reverse Machine.

Ambassador Darkness appears as a member of GranShocker. He was among the meeting with the Great Leader. Unlike his TV counterpart, his left is is cybernetic. 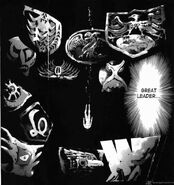 Badan Leader reborn through the will of the defeated.