Ambassador of Alagadda
SCP-701-1
SCP-2264-4
The Ambassador
The Person in Rags (by Eric)
The Dragon (by Dr. Placeholder McDoctorate)

Ambassador of the Hanged King.

Host of the Black Lord.

"Serve" the Hanged King. (succeeded this far, failed in tales)

Being the absolute ruler of Alagadda. (succeeded this far, failed in tales)

The Ambassador of Alagadda is a recurring antagonist in the SCP Foundation Mythos. It is a powerful reality warping entity who serves the Hanged King as a mobile agent and servant, although it is implied that it had imprisoned the King and use him to rule the interdimensional Kingdom of Alagadda on its own. It is designated by the Foundation as both SCP-701-1 and SCP-2264-4.

The Ambassador's true origin is currently unknown, but in "Theology of a Snake" it is shown as a mysterious figure originating from outside of Alagadda which at that point completely lacked any form of religion. After the King lost his wife leaving him in grief, the being that would become the Ambassador arrived in the Kingdom of Alagadda and took this opportunity to convince the king that he could become a god by having the citizens worship him. The king soon began performing rituals in order to achieve apotheosis through the belief of his people who were convinced by the Ambassador that the king would become a god. After the king sacrificed his only son, the Ambassador turned on the king by having him hanged, since in death he would properly become a god. After three days, the king returned to life, albeit not the way he had hoped for, while the Ambassador began using him to secretly rule Alagadda on its own accord. However, this story was told by a man from the Xia Dynasty and should be taken with a grain of salt.

After Alagadda became the interdimensional nexus due to SCP-3812, the Ambassador of Alagadda/SCP-2264-4 became one of the Hanged King's closest advisors, alongside the four masked lords.

As the Hanged King himself could not move from his palace in Alagadda, the Ambassador became a key agent of the monarch, representing him in other realms of the multiverse, such as the Kingdom of Adytum.

The Ambassador influenced sixteenth century playwright Christopher Marlowe to write SCP-701, The Hanged King's Tragedy, a five-act Caroline-era revenge tragedy which would kill tens of thousands of people via anomalous ways. Around that time the Ambassador also influenced composer Carlo Gesualdo da Venosa after the latter brutally killed his cheating wife and her lover. As Gesualdo became haunted by visions of Alagadda and its citizens, the Ambassador invited itself into Gesualdo's castle and further manipulated the composer, turning Gesualdo into a fanatic servant of Alagadda. As part of Gesualdo's plan to bring Alagadda back into reality, the Ambassador sent the Yellow Lord of Alagadda, who was also heavily associated with music in order to help Gesualdo into constructing a mechanical instrument made out of the remains of deceased singers killed by Gesualdo. The instrument would later become known as SCP-6624 as the music produced by it would not only affect listeners both mentally and physically, but could summon Alagdda citizens into reality.

The Ambassador allied with three of the lords to exile the Black Lord, since the lord had figured out that the Ambassador intentionally left the King in chains and did not wish to see him rise to power. The plan worked and the Black Lord was successfully exiled to "a dreadful dimensional backwater", while the Ambassador watched the carnival parade destroy the lord's original body.

The Ambassador also exiled four unknown citizen from Alagadda due to them practicing music to which the Ambassador, unlike the other lords, did not like. After having them exiled to Earth, these four individuals decided to form a rock band and spread their music dedicated to the Hanged King. This band would later be designated SCP-5075. However, after the Ambassador found out that they still practiced music, it manifested itself during one of their performances and assaulted them directly before demanding that they cease their activity much to the band's dismay. However, apparently the band secretly continued in creating music despite all of this, since it is implied that SCP-2112 was created by them.

At some point it met the SCP Foundation's Mobile Task Force Psi-9 ("Abyss Gazers") inside the palace, where it decided to torture them with its psychic powers, destroying the bodies of all the agents, while laughing over the affair in its alien language. Only one agent, Alexander Papadopoulos, was left alive and was taken to see the Hanged King. The Ambassador lifted the veil that covered the face of its master, and the eldritch horrors beneath turned agent Papadopoulos insane and wanting to commit suicide.

The Ambassador then returned a mangled agent Papadopoulos to Earth, as warning for further missions to the city and to have the agent tell cosmic irrelevance about the human race.

The Ambassador, its King, and the three lords were eventually greeted by Ruprecht Carter, Skitter Marshall, Percival Darke and his apprentice Iris Dark from Marshall, Carter, and Dark Ltd., which was acquainted with the Kingdom. The businessmen offered the Alagaddans the skull of the recently deceased SCP-096 in exchange for some rooms in the palace. After the Hanged King revived 096 into his new servant, the Ambassador was pleased and agreed to give them more liberty in Alagadda.

When the event only known as SCP-6500 began neutralizing all of the anomalies due to the Foundation containing most of them, Alagadda was one of the many anomalies being affected by the entropy. After Foundation personnel Delfina Ibanez, Dr. Placeholder McDoctorate, and Dr. Udo Okorie entered Alagadda's Black Vaults through the Wanderer's Library with the intent of learning more about the sword known as "The Leading Edge", the weakened Ambassador began taunting Ibanez from the darkness. It then made them think it was part of their group and showed them the dark knowledge before Ibanez realized that the Ambassador was not part of them. This prompted the Ambassador to attack Ibanez and began manipulating reality around them in order to torment her. Thankfully Ibanez was able to fight back and during the bloody struggle, Ibanez took the Ambassador to the fountain under SCP-5923-A where Ibanez ordered her task force to shoot at it. This caused the two of them to be transported back to the Kingdom's Black Vaults and seeing that the Ambassador had been knocked out she took the opportunity to snap its neck and killing it for good. As a result of its death, Ibanez's sword achieved its full power which would allow the Foundation to fight SCP-6500, while the Hanged King was finally free from his chains.

However, unbeknownst to the Foundation the Ambassador had managed to survive and as magic began to return within Alagadda, it slowly regained itself. When Ibanez returned to the King's palace in order to rescue Okorie who had been left behind, the Ambassador tried to get its revenge on her, but because it was still recovering Ibanez shot it with her gun before getting SCP-035, the Black Lord's mask, and quickly put it on the Ambassador's face, allowing the Black Lord to take possession of the Ambassador and use it as its new body.

Unlike its master, who appears to be an indifferent being, the Ambassador is extremely malevolent and narcissistic, showing great pride over who it is and what it can do. This was notably shown when it killed most agents of MTF Psi-9, laughing in amusement over the agony of the humans. It also appears that it is not actually loyal to the king as it is heavily implied that it deliberately keeps the king imprisoned and uses him for its selfish reasons, making it the true ruler of Alagadda.

The Ambassador is described as a feminine humanoid entity, having "black flesh" and lacks any facial features, such as eyes, a nose or a mouth. On a first glance the being also appears to have a skintight outfit and high heels, which in fact are part of it's body and not clothing. It is the only one, alongside the King, who doesn't wear a mask in Alagadda. During the events of SCP-6500 after the bandages fell from its body the Ambassador was described as a lithe form of sheer night.

The Ambassador was able to travel through the multiverse, going as far as the Kingdom of Adytum and met the local Grand Karcist. It was also able to manipulate matter and reality with its mind. Despite all these powers, it would still be a mere pawn to the full power of the Hanged King. 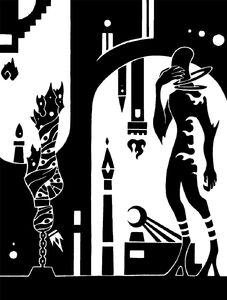 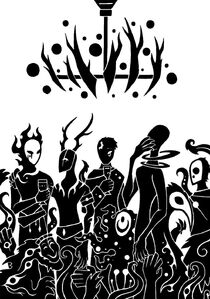 The Ambassador among the inhabitants of Alagadda. 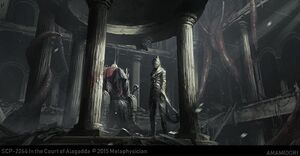 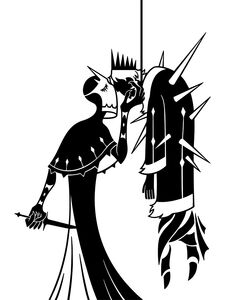 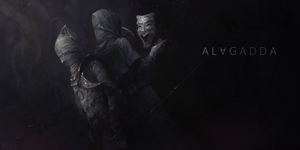 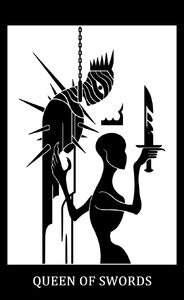 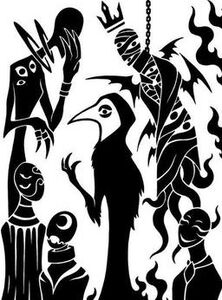 The Ambassador among the Hanged King's court. 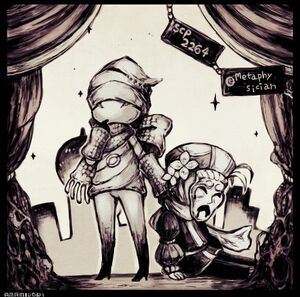 With the Black Lord. 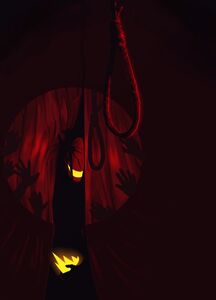 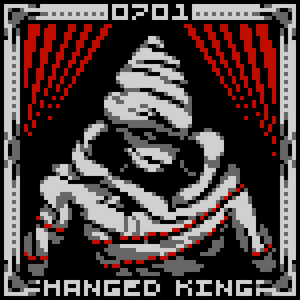 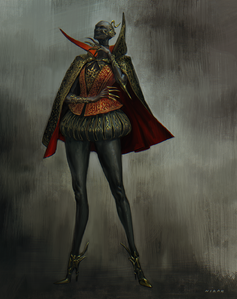 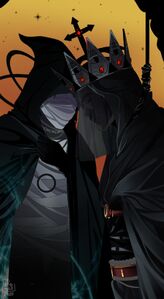 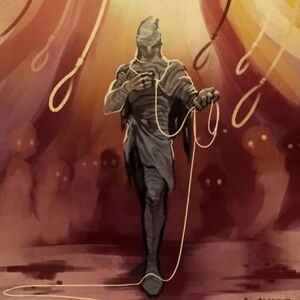 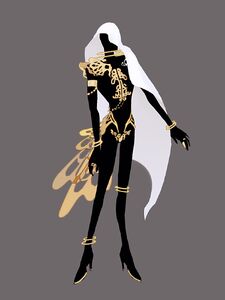 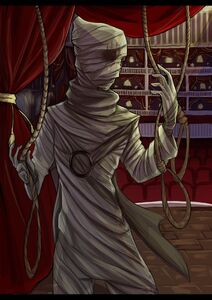 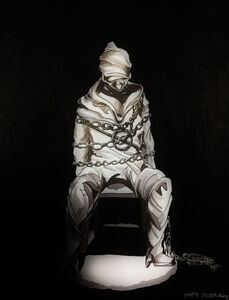 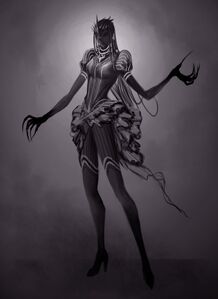 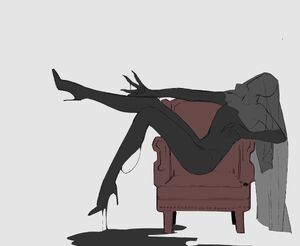 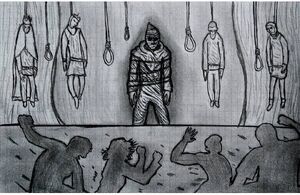 The Ambassador watching as the audience goes mad and slaughter each other. 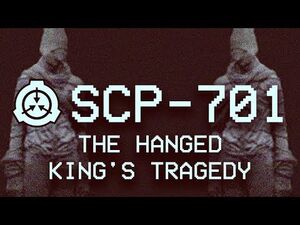 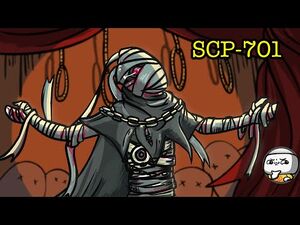 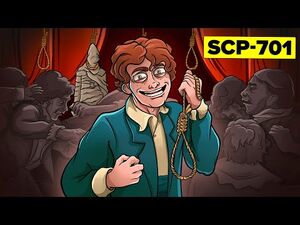 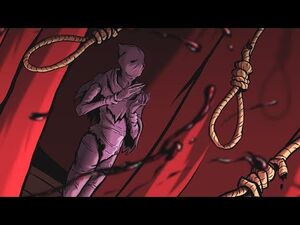