Amber is the secret antagonist of the Dan Vs. episode "Dan Vs. Anger Management". She is the instructor of an anger management class that Dan and Chris both attend in the episode. She is also somewhat of a love interest to Dan in this episode.

She was voiced by Jenna Fischer.

Amber is first seen welcoming Chris and Dan to anger management class for 4 weeks. 5 hours later, Dan is complaining about his worksheet. Four hours later, Amber gave Dan a television and tells him whenever a channel makes him angry, she tells her to click a button. Dan is then very annoyed by the television, so he destroys the television. She goes into interrigation with Chris and Dan about their anger levels. Dan's level is confirmed to be 80, after that Dan corrects her by saying that it's only up to 50. After this she tells him that 50 and lower is for normal human emotion. She orders the other anger management students to welcome Chris and Dan to anger management class. She gives the class a chance to tell her what sets them off, littering is her example. Dan hears her car alarm, which causes him to get the other students to destroy Amber's car. After the destruction of her car, she goes into another interrogation with Dan and his friend about her car being destroyed. Amber later gives them a chance to volunteer for her by cleaning the grass. One guy throws a paper ball at her, which almost causes her to lose it. She goes back into her classroom to get out a stressball and have a cup of tea. Dan orders her to track down the guy who threw a paperball at her, but she told him it is impossible to find him, because she barely knows a single thing about him. However, Dan gives her the guy's license plate, while Amber changes her mind and agrees to help him. During the night, she and Dan find the guy while dressed up like robbers, and the two fill the guy's car with trash. The guy gets upset about his car getting trashed after he shortly gets out of his house. She insults him and throws a trash can at him brutally.

She and Dan later on go to Ninja Dave's cookie shop, growing an excited expression about taking down the guy who threw a paperball in her face while driving his car. Amber planned on taking down the girl named Emily who she met in high school and intentionally got her shirt wet during the yearbook photo day by spilling ink on her, who is getting married on Saturday. She glares at Dan while giving him a choice to either do what she says, or she will send him to prison for ten years, just like the judge said far earlier to Dan. Later, she and Dan sneak up on the church, and set up a paint bomb, warning Emily. Amber freaks out about her school grounds being covered with garbage. Chris tells her that's he's been covering the school grounds with garbage because he finally got a touch with his anger. She gets into a rampage, getting ready to chase Chris by attempting to kill him with a chainsaw. She later stands up to her anger with her students.

While seemingly caring and warmhearted at first, quickly welcoming Dan and Chris to the class, she eventually gets in touch with her anger when Dan coaxes hers into getting revenge after a litterer tossed scrap at her. She then becomes persistent in getting revenge from other people and forces Dan into joining in on her schemes, even where she becomes psychopathic at the point. 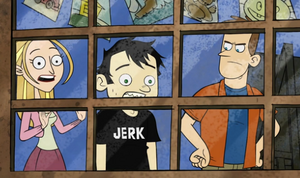 Amber noticing her car getting destroyed by her students. 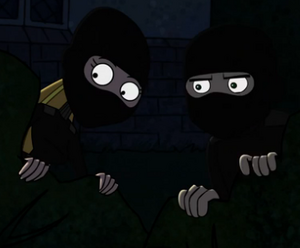 Amber and Dan dressed up as robbers, although they're not attempting to commit robbery.

Amber and Dan about to wreck Emily's wedding. 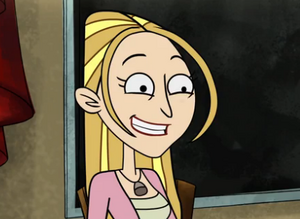 Amber's creepy smile.
Add a photo to this gallery
Retrieved from "https://villains.fandom.com/wiki/Amber_(Dan_Vs.)?oldid=3363331"
Community content is available under CC-BY-SA unless otherwise noted.