Torture and kill as many women as possible.

Amber Canardo (née Brooks) is the main antagonist of the Criminal Minds Season Two episode "The Perfect Storm". She is a serial killer and kidnapper, and the mastermind of a killing team that includes her husband Tony.

She is portrayed by actress and singer Nicki Aycox.

Born in 1985 in Jacksonville, Florida, Amber was physically and sexually abused by her father and brother. When she was 15, she stumbled into a Tallahassee hospital, showing signs of having been savagely beaten and raped. Doctors convinced Amber to go to the police, but when Amber arrived at the station, her mother appeared and told the officers that Amber was lying about everything, including the rape, and they stopped investigating. The abuse, combined with her mother's complicity in it, filled Amber with rage and hatred against not only her abusers, but her mother for allowing it. She wanted to inflict the same pain on other young women that had been inflicted on her so she could relive her abuse as the empowered tormentor rather than the helpless victim.

In 2003, Amber began abducting and killing teenage girls, convincing her then-boyfriend to help her. Amber took the girls to a secluded cabin in the woods, where she tortured them while her boyfriend filmed the assault. The torture would last for for weeks, until Amber finally strangled them to death. At some point in 2004, Amber's partner died (possibly at her hands) and she left his body to rot on the grounds located near the cabin.

The following year, Amber met Tony Canardo, who became her new partner, when he was released from prison. The two married and began killing girls together, recording the torture and murders. They would then have Tony's former cellmate Joey Davin dispose of the victims' cars over state lines; he would do so without realizing what the two were actually doing. When the mother of her sixth victim, Bonnie Mossenberg, appeared on television, pleading for her daughter's safe return and begging forgiveness for her abductor, not knowing at the time Bonnie was dead. Enraged, Amber sent a DVD depicting Bonnie being tortured and raped to Mrs. Mossenberg, as if to say "I don't want, or need your forgiveness".

When the BAU is given a series of DVDs by a number of murder victims' families, Supervisory agent Jason Gideon is convinced that that a two-person killing team is behind the murders, and that the dominant killer is male. Meanwhile, Amber abducts Tiffany Spears after Tony asks her for directions.

Through investigation, the team finds a link to Joey, but he refuses to comply and commits suicide-by-cop by pulling a gun on one f the agents. The BAU then tracks down Tony, whom they believe is the dominant partner. They meet Amber, who is sporting a black eye and presenting a meek, frightened demeanor, and assume that Tony is abusing her. Unbeknownst to them, Amber had given herself the black eye, and is manipulating them into giving her a chance to silence Tony.

Tony refuses to talk to them, so Amber is brought in to talk to Tony to find out the location of the missing girl. Tony pretends that he is the mastermind of the murders in order to protect Amber. As Gideon and fellow Agents Spencer Reid and Aaron Hotchner watch her interact with Tony, however, they notice that Amber does not fear him, and appears unmoved by pictures of her victims' dead bodies. Amber's voice can be heard in the torture videos, and it is evident that she is not afraid of the cameraman. This leads them to deduce that she is the mastermind of the murders.

Gideon manages to get Tony to reveal where Tiffany is being kept (a cabin in the woods), and when the team arrives, they find as Amber is about to kill her. The team bursts in to the cabin, arresting Amber. She states that the FBI has nothing on her, but Hotchner replies that they have her voice on tape giving orders to Tony. As the BAU team takes her into custody, Amber brags that Tiffany will never be the same. 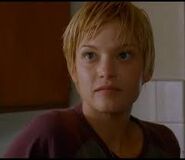 Retrieved from "https://villains.fandom.com/wiki/Amber_Canardo?oldid=4065655"
Community content is available under CC-BY-SA unless otherwise noted.