Amber Sheridan is the main antagonist from the 2018 Lifetime film Killer Twin.

She was portrayed by Lindsay Hartley, who also played Chloe Spade in another Lifetime film, Nightmare Nurse.

The backstory of Amber Sheridan and her twin sister, Kendra (also played by Hartley), revealed that they were orphaned at the age of one. They lived together at Bridges, an orphanage in Seattle, and were subjected to emotional abuse from Eunice, who ran the building. The twins were illegally separated by Eunice, when Kendra (who Eunice favored over Amber) was handed off to Janet and Roger Collins, who were unaware that she had a sister.

Amber was left in the system until the age of 18, and spent her adulthood committing petty crimes. Her offenses included, but were not limited to, grand theft auto and possessing a deadly weapon - the latter of which she received a slap on the wrist punishment for.

After 30 years, Amber found Kendra Walker, and became furiously envious over her sister's success. She informed her friend and roommate, Lotto, about Kendra, and after this, she returned to the orphanage and encountered Eunice - demanding more information about Kendra. When Eunice refused, Amber attempted to get Kendra's file herself, while knocking down Eunice during her attempt to stop her. She later smothered Eunice to death with a pillow, and she later got to work on her vengeful plan to take Kendra's life, believing that it should be hers.

The villainess broke into Kendra's home to steal her credit card information, which she used for online purchases, while also making herself over to look exactly like Kendra. She also stole the key to Kendra's safe deposit box, and taunted Kendra with it as she watched her leave the bank from inside her car. Amber later entered the bank herself as Kendra, stating to Marvin (one of the tellers) that she had found her key. Just as Amber was emptying Kendra's box, Marvin - realizing something was up - tested "Kendra" by thanking her for recommending a certain restaurant to him and his wife:  the same one where Dane Walker proposed to Kendra. When Amber could not remember the name, Marvin's suspicions were confirmed, and knowing that she was caught, Amber knocked out Marvin with the box and escaped with her sister's goods.

The film's climax saw Amber and Lotto work together in the former's final piece of her plan, which involved killing Kendra. After Lotto hacked into Kendra's emails, Amber sent Kendra the fruit basket that she laced with poppy seeds (which both were deathly allergic to). Kendra felt the effects and was hospitalized, while Amber gave an educational presentation posing as Kendra, and later set her sights on Dane. While preventing Dane from answering Kendra's call, Amber seduced Dane (who he believed was Kendra) and drove home with him, after which they continued their sexual encounter. However, Dane realized that the woman he was with was not Kendra, as Kendra had a birthmark on her neck - Amber did not. Amber knocked out Dane with her sister's trophy, and later tied him up to a chair.

Amber later attacked and knocked out Janet before finally going face-to-face with Kendra after three decades apart. The deranged villainess lashed out at Kendra, stating that Kendra's good life should be hers and accusing Kendra of abandoning her and leaving her for dead in the orphanage. She wielded a knife and attempted to kill Kendra, who later fought off her evil sister's attacks and ended up sending her over the stairway. Amber survived the fall and was then handcuffed and arrested for her crimes, and gave an ominous glare at Kendra, who shed tears for her sister despite everything she had done to her. The final scenes showed Amber in prison watching Kendra's interview, with Amber responding to an inmate's statement that she looked like Kendra by telling her that she was Kendra. 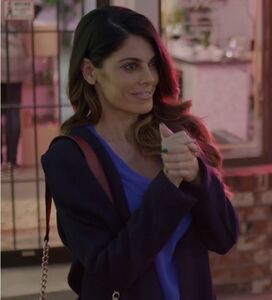 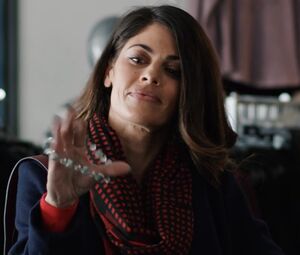 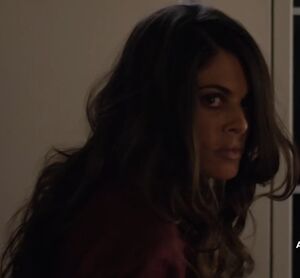 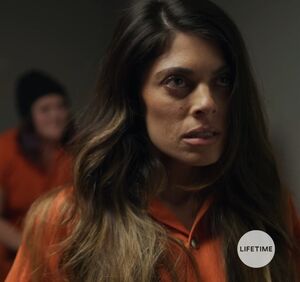 Add a photo to this gallery
Retrieved from "https://villains.fandom.com/wiki/Amber_Sheridan?oldid=3119800"
Community content is available under CC-BY-SA unless otherwise noted.