Kidnap young children from villages and turn them into Ame-onna like herself.

The Ame-onna (雨女, literally translating as Rain Woman) is an evil spirit from Japanese mythology that appeared as an ugly woman with a black sack who roams the streets and kidnaps any child she comes across. The spirit is always accompanied by a supernatural rainstorm that is often said to be of her doing.

They appear as depraved, haggish women in rags soaked with rainwater, often licking the rain off of their hands and arms like wild animals.

Often depicted as looking rather lonely and melancholic, and sometimes as if searching for someone or something, the Ame-onna seem to be rather quiet, appearing and dissapearing as rain comes and goes.

She is said to be able to be noticed not just by her hideous appearance, but by her tendency to stand in the rain and lick her hands and or arms when not hunting down her prey. As rain was brought to the area where she is somehow, the Ame-onna will then use it as an advantage to kidnap children, spiriting them into the night. Afterwards, the Ame-onna turns the child into one of her kind.

Mothers who have their children snatched away in this manner are sometimes prone to transform into Ame-onna themselves out of grief and despair. Having lost their minds, these transformed women roam the streets at night with large sacks hoping to replace what was stolen from them while they were still human. They sneak into houses where crying children can be heard, and steal them away from their homes into the night.

Legend states that the Ame-onna was original a divine goddess, but instead of simply being a victim of demonization, the Ame-onna somehow became corrupted and actively abandoned her former divine status in order to become a youkai, living among mortals and preying on them. 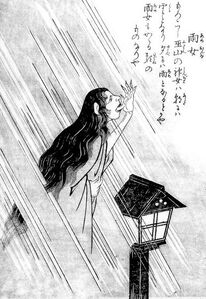