Head of the Kichougasaki Clan

Protect her loved ones.

She was voiced by Rina Satou in the Japanese version, and Caitlin Glass in the English dubbed version.

Many years ago, she and Suo Hiyama fell in love with the same man who later became Yuzu and Akane's father. Because of this, she and Suo have not been in friendly terms ever since, even though they got along just for a while.

Ameisha arrives and duels Suo instead. Akane and Yuzu explain their mothers were once in a relationship with the same man, Akane and Yuzu’s father, and were good friends, but the relationship ended badly, resulting in their family feud. Akane stops the fight by insisting she is staying with Seiji no matter what. Guri points out Suo is acting out of love and is subsequently stabbed in the head by the embarrassed Suo, who allows Akane to continue dating Seiji, on condition she will kill him if he ever hurts Akane.

Akane, back to her old self, attacks Guri for kissing Seiji and declares that they are now rivals. Suo explains to Ameisha that Yuzu is in love with Akane while also dating Seiji, something Ameisha had been unaware of.

Ameisha has shoulder-length hair of blonde color and green eyes. She wears a long green dress with a light blue ribbon tied to her waist and held above her overlapped bottom part of the dress. Her accessories are bracelets on each wrist, a moon necklace, and a pair of ring earings.

Ameisha is a typical woman who is stubborn and overprotective of her daughter, which runs over the family. She is revealed to be rivals with Suo Hiyama from the past; even hates her gloomy side. However, she is the kind of person who doesn't seem to care who hurts her feelings for she intends to move on and live up her life. As she said, even if Kanzou leaves for another woman, she is still fabulous with or without him. 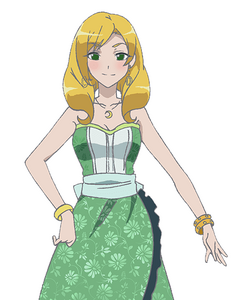 Ameisha
Add a photo to this gallery
Retrieved from "https://villains.fandom.com/wiki/Ameisha_Kichougasaki?oldid=3474504"
Community content is available under CC-BY-SA unless otherwise noted.