Villains Wiki
Register
Don't have an account?
Sign In
Advertisement
in: Articles under construction, Article stubs, Scooby-Doo Villains,
and 17 more

Scooby-Doo! in Where's My Mummy?

Collecting treasures and selling them to make money

To steal the crown of Cleopatra (failed)

Dr. Amelia von Butch is the main antagonist of the Scooby-Doo franchise's 16th feature film Scooby-Doo! in Where's My Mummy?.

She is an archaeologist and world-class "treasure thief". Her henchmen are Campbell and Natasha, among others.

She was voiced by Christine Baranski, who also voiced the Chef in Trolls, Beverly Hofstadter in The Big Bang Theory, and Kaos' Mom in Skylanders: SWAP Force.

She encountered Mystery Inc. when she decided to go after the treasure of Cleopatra, hidden under the Sphinx. However, she and her crew ran right into Velma Dinkley's Ghost of Cleopatra plan to protect the treasure. After avoiding the "army of the undead" and watching her henchmen seemingly be turned to stone, she finally reached the crown. In grabbing it, however, she set off a trap, flooding the tunnels. Amelia made it out of the Sphinx only to be caught in a prearranged trap set up by Fred, and have the crown snatched by Triple A's hawk. 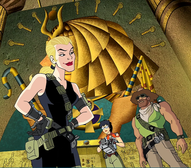 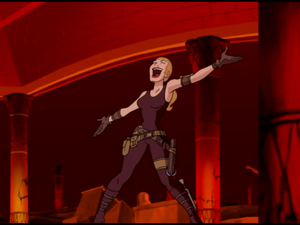