Marry Mei as to get ahead in life.

Amemiya is a minor antagonist in the 2012 yuri (girl-on-girl) manga Citrus as well as its 2018 anime adaptation. He was the former fiancée of Mei Aihara.

Amemiya was originaly the post homeroom teacher of Yuzu and Mei. Yuzu first met Amemiya when she was made to remove her makeup after a run through with the Student Council President. Yuzu initially takes a liking to her homeroom teacher due to his appearance, and she intended on finding him later and asking for his number. After retrieving her cell phone from the office, Yuzu shockingly discovers Amemiya forcefully kissing Mei; despite the assault, Mei is noticeably fine with what was happening. Horrified, Yuzu races off, catching the attention of the homeroom teacher who tries to run after her.

She relays what she had seen to Harumin, and later informs Mei about it only to realize that she already knew about it. Whilst conversing with Harumin, the two overhear Amemiya talking on his phone with his lover, bragging that he only planned on marrying Mei solely for the financial gain and social status. Disgusted, Yuzu goes against her better judgment and publicly ousts Amemiya for his adultery. This culminates in Mei's grandfather - who was also the chairman for the Aihara Academy - expelling Yuzu out of humiliation at this revelation coming to light. Amemiya is also fired as a result to avoid anymore scandals.

Despite the fact that Amemiya ultimately did not marry Mei as initially planned, Amemiya did leave an impression on Mei. When Yuzu was trying to force Mei to talk to her, she brings up the kiss that Mei shared with their homeroom teacher, stating that it must've been her first kiss. Mei is provoked to forcibly pin Yuzu to the ground, and deeply kisses her, even though Yuzu began to squirm underneath. Throughout her stay with Yuzu and her stepmother, Mei would continue to use sex as a means of manipulating Yuzu, most likely an aftereffect instilled in her by her ex-fiancee. 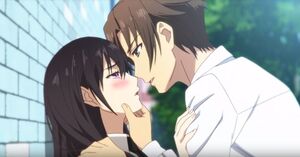 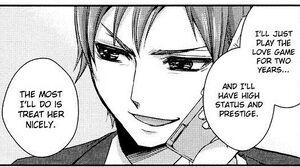 Add a photo to this gallery
Retrieved from "https://villains.fandom.com/wiki/Amemiya?oldid=3439146"
Community content is available under CC-BY-SA unless otherwise noted.