Amenadiel of the Thrones

Soldier in the Host of Heaven

Amenadiel was an angel of the Host of Heaven and a recurring enemy of his brother Lucifer Morningstar in the DC/Vertigo comic book series Lucifer.

Amenadiel looked not unlike a middle-aged caucasian male, with grey eyes, long silver hair draped across his shoulders and a neanderthal-like jawline. He possesses a pair of white angel wings that he can expose and retract at will.

Amenadiel was an angel from Heaven and was titled as a throne in its hierarchy. He detested his brother Samael, now called Lucifer Morningstar, for revelling against the plan of God, and always worked in a way to destroying him in the name of Heaven.

Even when his hate for Lucifer was widely known, especially by the Presence/God, he was tasked with giving a special mission to the fallen angel. He travelled to the Lux to ask Lucifer for assistance in destroying an old god from the Navajo's, in return for a price of his naming. Lucifer wished a letter of passage and did his work without problem. The letter was given by Amenadiel to Lucifer, who later used the letter to create a new empty reality, outside of the boundaries of God, something that enraged Amenadiel.

Amenadiel decided to gather an army of angels from Heaven and attack Lucifer, due to the creation of the new reality, even without receiving any word from God. His army suffered heavy losses, but in the end, they took to the city of Los Angeles with the door to the new empty reality. Lucifer forced them to retreat, though, when confronted with the option to let Michael die in this reality, destroying everything at the moment of release of demiurge energy, or do it inside the new empty reality, creating a new universe in the process. Amenadiel did not accept defeat without before forcing Lucifer to promise a confrontation in one year in the future, in Hell, in the land of Effrul.

With his new creation made, Lucifer created a new world to practice being God. Amenadiel became a serpent and tempted Lucifer's version of Adam and Eve, and proved them faulty. Amenadiel thought he outsmarted Lucifer, but the latter had him in account, and used Amenadiel as a 'quality control' measure, to avoid the same mistakes that God made in his own creation.

By their own pact, Amenadiel went one year later to confront Lucifer in the land of Effrul, in Hell. Knowing well that Lucifer was weakened by the masterminded work of Izanami he hoped for a quick and easy victory, and sent a couple of assassins to be sure. No matter what he planned, in the end Lucifer won the fight, and bent the rules far enough to win but not to be disqualified. Amenadiel lost his life against Lucifer, and the thrones were cast down in Heaven hierarchy, not that any of it mattered to Lucifer.

As an Angel, Amenadiel is entitled to a plethora of powers and abilities

As an angel, he does have his fair share of weaknesses. Because he is a member of the Host of Heaven, while he will find loopholes, he is obligated to the will of God and the Host of Heaven. The only way for him to die (conventionally) is for his heart to be torn out and eaten. 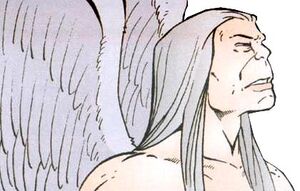 Amenadiel setting the table on fire using the wine Lucifer gave him. 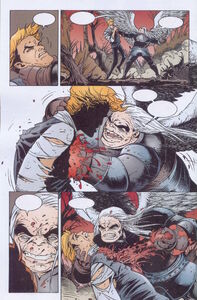 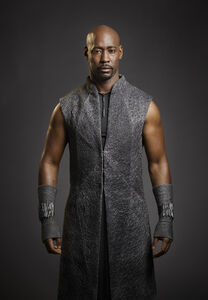