Ghost in the Shell manga

The American Empire is a right-wing imperialist power in the 21st century dystopian cyberpunk world of Masamune Shirow's Ghost in the Shell manga and anime.

It adopted an imperialist foreign policy and attempted to regain the global prominence by deploying its military forces in both North and South America, to secure additional territory for the American Empire. Out of necessity born from the fact that it's political position was weak and the post-war economy was in bad shape, it formed an alliance with Japan which had emerged from World War III with far less damage than most of the combatants.

The alliance reaffirmed Article 9 in the Japanese Constitution which prohibited them from either possessing nuclear weapons or deploying its armed forces overseas. Part of the reason the American Empire decided to enter into an alliance with Japan was the fact that their nuclear weapons were not as big as deterrent as before. Due to the Japanese having invented radiation scrubbers which negate the feared radioactive fallout in the aftermath of using nuclear weapons.

In 2020, the American Empire manipulated the UN to authorized the deployment of combined AE/UN forces into Latin America on the pretext of overthrowing corrupt governments in Mexico and other Latino countries. Using a combination of mechanized troops, carpet bombing, and atrocities, they defeated the guerrilla forces in several countries that resisted the American Empire's occupation.

When a civil war erupted on the Korean Peninsula in 2024, the American Empire once again manipulated the UN to intervene in the war, on the pretext of stabilizing the peninsula. In reality, for the AE it was an imperialist campaign to seize Korea's natural resources and offered a portion of the resources as a gift to Japan if it deployed its own military in a supporting role. War is still ongoing on the peninsula.

Outside of the Western Hemisphere, the American Empire does not have much influence. When it comes to East Asia, it has very little influence as that is the backyard of China and Japan. It's economy is nowhere near the league of that of China (the largest economy), India (the 2nd largest), or Japan (the most advanced). They are in a Second Cold War with China and its trading bloc (India & Southeast Asia) and have a hostile relationship with the Russo-American Alliance whom they see as their enemy. 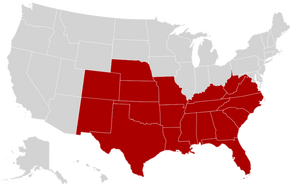 American Empire (Ghost in the Shell) 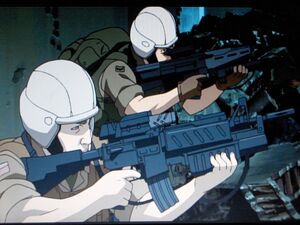 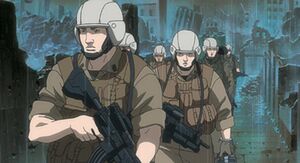 Soldiers of the American Empire (Ghost in the Shell, Stand Alone Complex)
Add a photo to this gallery
Retrieved from "https://villains.fandom.com/wiki/American_Empire?oldid=3531941"
Community content is available under CC-BY-SA unless otherwise noted.