Amir Asif is the main antagonist of the Netflix action film Extraction.

He is a powerful Bangladeshi drug lord who captures the son of a powerful Indian drug lord, and locks down the entire city of Dhaka when a mercenary arrives to rescue him.

He was portrayed by Priyanshu Painyuli.

Amir hires two corrupt police officers to kidnap Ovi Mahajan, son of Indian criminal Ovi Mahajan Sr., at a club after killing his friend right next to him. Australian mercenary Tyler Rake is hired to retrieve Ovi, but despite succeeding, his team is double-crossed by Ovi Sr.'s hitman, Saju, and Ovi's escape causes Amir to use his influence to lock down all of Dhaka, closing all bridges out of the city, until Ovi is recaptured and Tyler is killed.

Despite Asif sending Dhaka's police force, SWAT teams and his personal enforcer squad of young boys, Tyler manages to fight his way through them, with Amir punishing his child accomplices by having them thrown off buildings and cutting their fingers off. He monitors Tyler and Ovi's progress with his binoculars, and when they reach a bridge checkpoint after teaming up with Saju, soldiers of the Bangladesh Army (also under Asif's leverage) open fire on them. After a long battle, Saju is shot dead by Amir's colonel while Tyler is presumably killed by Asif's young hitman Farhad, much to Amir's satisfaction. Fortunately, Ovi is rescued with the help of Tyler's accomplice, Nik.

8 months later, Amir is in a public bathroom when Nik suddenly approaches him and shoots him in the head with a silenced handgun, killing him to avenge Tyler and ending his reign of terror over Bangladesh for good. 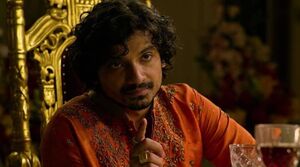